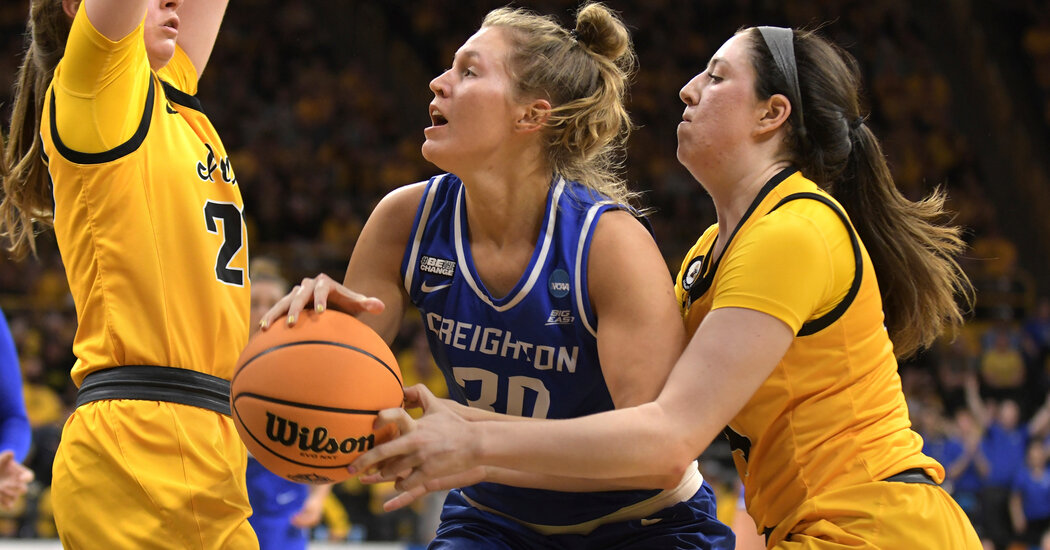 The Creighton women’s basketball team made its first round of 16, and did it with late-game drama befitting the NCAA tournament.

Lauren Jensen, a sophomore who is in her first year playing for Creighton after transferring from Iowa, shut the door on her former team on its home court with a go-ahead 3-pointer in the final minute to help seal a 64-62 victory over the second-seeded Hawkeyes.

“They were the two seed, we were the 10 seed, and so we had nothing to lose in this,” Jensen, who scored 9 fourth-quarter points, told ESPN after the game, just before teammates emptied water bottles on her head. “We played well all season. We believe in each other, we play together, and we knew that if we played our game we’d do just fine.”

Iowa was a popular pick to make the Final Four, mostly because of the eye-catching play of the sophomore guard Caitlin Clark, who entered the game as Division I’s leading scorer, averaging 27.4 points per game. Creighton held her to 15 points on 4-of-19 shooting, although, with 11 assists and eight rebounds, she nearly had a triple-double.

The Iowa junior Gabbie Marshall’s 3-pointer put the Hawkeyes ahead with just under seven minutes left in the fourth quarter after they had trailed by as many as 12 late in the second quarter. Creighton reclaimed his lead when there were 15 seconds left on Jensen’s 3-pointer.

“This is for everybody who’s played at Creighton, who’s put on a uniform and gotten us here,” Creighton Coach Jim Flanery told ESPN. “To finally make it to the Sweet 16 is really special — special for this team, and special for the program.”

This is Flanery’s 20th season as Creighton’s head coach, and the team’s fifth NCAA tournament appearance under his leadership. In the round of 16, the Bluejays will play the winner of No. 3 Iowa State’s game Sunday night against No. 6 Georgia.