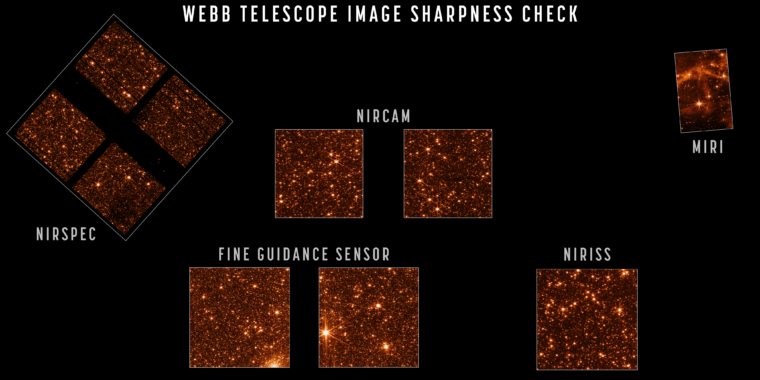 In mid-March, NASA released an image from the Webb Space Telescope that demonstrated that its primary mirror reached the point where it focused light as finely as physics would allow for hardware of its size. That was a critical milestone, but it only applied to one of the five instruments carried by the telescope. On Thursday, NASA announced that the next milestone had been reached: All the instruments were now equally in focus.

Webb’s instruments include two spectrographs, two imaging cameras, and the fine guidance sensor that helps with pointing the telescope. Each of these has had to be aligned individually to the primary mirror to ensure focus, a process that has taken several weeks. But now, the focus for each of them is about as good as physics will allow.

That limit is set by diffraction, the process by which light interferes with itself and diffuses when it reaches an edge or corner. While it’s possible to beat the diffraction limit if you have complete control of the photons and play quantum mechanical tricks with them, that isn’t the case with telescopes. So, diffraction-limited is the best we can hope for from a telescope. And, according to NASA, it’s somewhat better than we had planned for: “The optical performance of the telescope continues to be better than the engineering team’s most optimistic predictions.”

But we’re not quite ready to start science just yet. Each of Webb’s instruments includes a variety of mechanical hardware, such as filters that block out specific wavelengths. This hardware has to be checked out to confirm it’s functioning as planned, a process called instrument commissioning. That process is expected to take roughly two months, allowing science operations to start in mid-June.

In the meantime, NASA will also test the telescope’s cooling systems and validate its testing/correction procedures to ensure that the primary mirror remains properly aligned.