Rabbi Chaim Kanievsky was laid to rest on Sunday in an event that saw millions of thousands of people throng to Bnei Brak to pay their last respects to the influential Haredi scholar and leader.

Between half a million and 750,000 people turned out, according to various assessments, and dozens of schools were shut and highways closed down ahead of the funeral. It was the biggest such event since an estimated 800,000 people crowded Jerusalem’s streets and alleys for the funeral of Sephardi sage Rabbi Ovadiah Yosef in 2013.

Route 4, a major north-south artery that passes through Bnei Brak, was blocked off in both directions to enable buses to reach the area.

Many other roads were closed and traffic in Bnei Brak itself was brought to a halt.

Police deployed some 3,000 officers to the event to maintain order.

Kanievsky, who died Friday afternoon at age 94, was a hugely influential leader of the non-Hasidic Lithuanian ultra-Orthodox community, with millions of thousands of followers, and a scion of rabbinical dynasties known for his elite Talmud study. 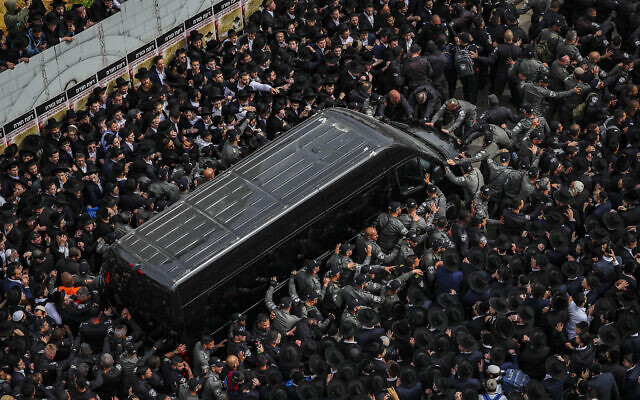 Ultra-Orthodox Jews attend the funeral ceremony of Rabbi Chaim Kanievsky in the city of Bnei Brak, on March 20, 2022. (Yonatan Sindel/Flash90)

The procession began at around 12 pm at the rabbi’s home, with hundreds of police officers accompanying the hearse to the Zichron Meir Cemetery in the predominantly ultra-Orthodox Tel Aviv suburb.

Leading figures in the ultra-Orthodox community eulogized Kanievsky, remembering him as an unparalleled scholar and spiritual leader. 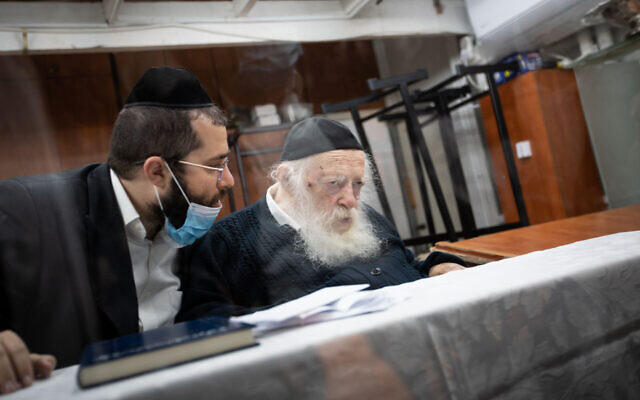 Rabbi Chaim Kanievsky and his grandson Yaakov (Yanki) Kanievsky (L) at the former’s home in the ultra-Orthodox city of Bnei Brak on September 22, 2020. (Aharon Krohn/Flash90)

Rabbi Gershon Edelstein, 98, seen as the heir to Kanievsky’s leadership, said that there is no one who can parallel Kanievsky’s level of influence “here and anywhere else in the world.”

Rabbi Shlomo Kanievsky, the late rabbi’s son, called him “unparalleled in his generation” and praised his dedication to Torah study and to encouraging ultra-Orthodox youth to dedicate themselves to full-time study.

Kanievsky was laid to rest alongside his wife, Batsheva.

Police blocked entry to the cemetery to members of the public, allowing only family members and senior public figures to attend the burial over fears of overcrowding.

Shortly after the funeral ended, the crowds began to disperse without any further unrest.

According to officials, at least 50 people were treated at the scene by first responders and four were taken to hospitals.

Police warned on Saturday night that the mass attendance could lead to tragic loss of life, reminiscent of the deadly crush at an ultra-Orthodox festival in the northern town of Meron in 2021 that saw 45 people killed and 150 injured in what was Israel’s worst- ever civilian disaster. Prime Minister Naftali Bennett issued a similar warning on Sunday morning.

Do you value The Times of Israel?

If so, we have a request.

Every day, our journalists aim to keep you abreast of the most important developments that deserve your attention. Millions of people rely on ToI for fast, fair and free coverage of Israel and the Jewish world.

We care about Israel – and we know you do too. So today, we have an ask: show your appreciation for our work by joining The Times of Israel Communityan exclusive group for readers like you who appreciate and financially support our work.

We’re really pleased that you’ve read X Times of Israel articles in the past month.

That’s why we started the Times of Israel ten years ago – to provide discerning readers like you with must-read coverage of Israel and the Jewish world.

So now we have a request. Unlike other news outlets, we haven’t put up a paywall. But as the journalism we do is costly, we invite readers for whom The Times of Israel has become important to help support our work by joining The Times of Israel Community.

For as little as $6 a month you can help support our quality journalism while enjoying The Times of Israel AD-FREEas well as access exclusive content available only to Times of Israel Community members.

Thank you,
David Horovitz, Founding Editor of The Times of Israel