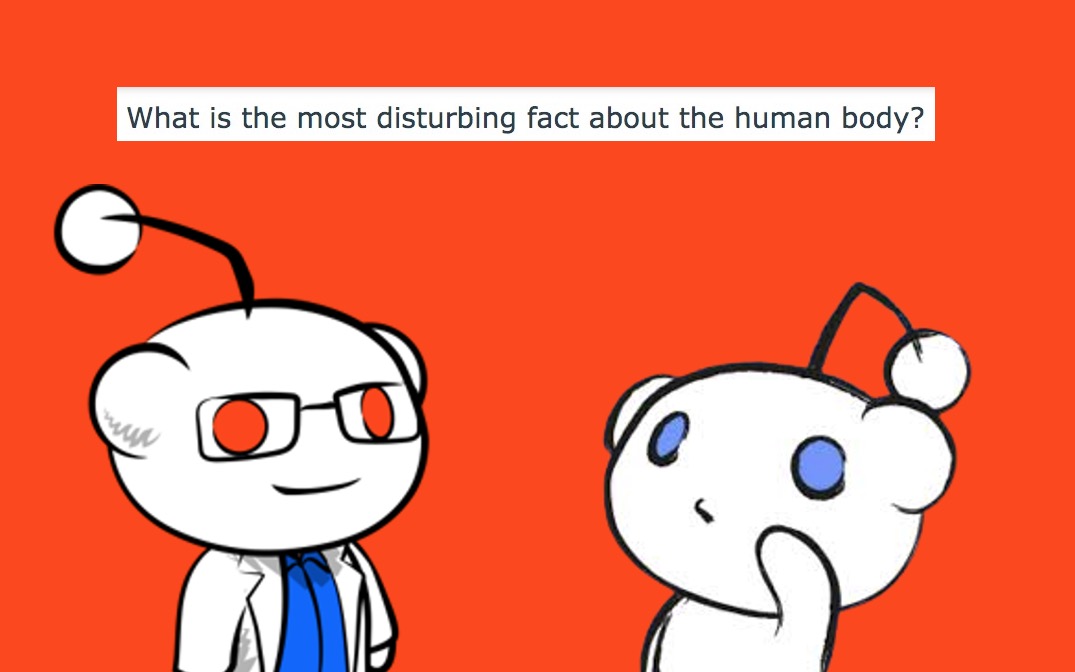 Does it ever boggle your mind about how complex the human body is when you really think about it?

Redditor BathNo7713 queried the r/AskReddit community about what they considered the most “disturbing fact about the human body” and a flurry of simultaneously weird, gross and extraordinary responses came flooding in from thousands of users.

We rounded up a few of our favorite answers from the thread, with sources included, that might teach you something new about the meat suit that you inhabit.

Humans Have Stripes We Cannot See

They’re called Blaschko’s Lines, and they cover the body from head to toe. We just can’t see them.https://t.co/nZMEpNFAcV

We have stripes that we can’t see

How can our stripes be real if our eyes aren’t real?

Also wtf are you talking about?

They’re in a different wavelength of light that our eyes cannot detect. We also glow in a specific spectrum.

Your Eyes Have Ocular Immune Privilege

Your immune system doesn’t know your eyes exist, if it did it would attack them and make you go blind

i regret ever opening this thread

It was very eye opening!

Stomach Acid Is A Lot Stronger Than You Might Think

Stomach acid is very powerful, it would burn right though us if we didn’t secrete mucus every few hours

Which is also why we salivate excessively shortly before vomiting. It’s our body’s self defense mechanism to reduce the acid damaging the esophagus.

No wonder I salivate so much before puking. I can always tell I’m about to hurl because my mouth is full of saliva

It’s also because your pre-vomit saliva contains an enzyme that tells your stomach to throw up once swallowed. You can actually forcibly delay vomiting if you need to by spitting out the pre-puke saliva instead of swallowing it.

The First Thing Humans Develop As An Embryo Is An Anus

Your butthole and your mouth originate from the same cell grouping during development, but the butthole cells form first, then the mouth cells from them. That means your mouth is from your ass.

Source: for some reason, I needed to know this for the MCAT

Humans are deuterostomes. Meaning as embryos the first thing to develop is an opening that will eventually become the anus. So at one point you were nothing but an asshole

And some people never stop being one.

Period Cramps Are Literally Your Body Being Suffocated

In the majority of cases period cramps are caused by your uterus contracting intermittently – blood vessels get compressed when this happens and this temporarily causes discomfort during the contraction pic.twitter.com/0Uz4WAa4JU

Period cramps are essentially your womb suffocating itself.

To get the uterine lining out of your womb during your period, your uterus has to contract. Sometimes, when the contractions are stronger, your womb squeezes its blood vessels so tight that oxygen can’t reach them, which sends pain signals to your brain (ouch). But wait, there’s more – this process increases your production of chemicals called prostaglandins, which encourages more contractions of the uterus. There really is no mercy.

Oh and that nonsense sets off the infamous period shits. It’s like your body thinks it’s funny to make it feel like you’re being turned inside out.

I will never forget the time I had severe food poisoning while on the worst day of my period. Puke coming out one end, liquid fire shits out the other, and each heave felt like I was going to pass out from the pain. It was legitimately the worst few hours of my life.

You make and swallow between 1 and 2 liters of saliva. Every. Day.

Everyone reading this just swallowed manually.

As someone who finds spit beyond revolting.

In 2012, scientists swabbed 60 human belly buttons and identified a total of 2,368 bacterial species, 1,458 of which were new to science.

One person’s belly button was home to a bacterium that had previously been found only in Japanese soil. The person had never been to Japan. pic.twitter.com/8lI2vhfV3i

Scientists once took a swab of the inside of an American man’s belly button to observe the bacteria that lived there.

They found bacteria previously only known to exist in Japan. The man had never traveled outside of the US

If I remember correctly, and article discussing this experiment found that the bacterial combination in our belly buttons is almost as unique as our finger prints.

I’m cleaning this bitch out with rubbing alcohol from now on.

The Tiniest Injury To Your Brain Can Change Your Life Forever

This slow motion video depicts the motion of the brain during an impact event. Concussions are the most common form of traumatic brain injury & are a growing concern in many contact sports [Source, University of California: https://t.co/XBdcrkIMKY] [more: https://t.co/DAXF3gFYVG] pic.twitter.com/XhuUfZcXUd

The tiniest injury to your brain can change your entire life. Depending on the part of the brain that gets hurt, you can lose your special/general senses, control over your own body, the ability to produce and/or understand language, your memories, your personality, etc. Remember to wear a helmet everyone!

At the same time there’s parts of your brain you can lose and still be able to function completely normally. Shit is wild.

This! You can survive getting shot in the head but if you bonk your head wrong, it’s over!

[Read more disturbing facts about the human body on r/AskReddit]