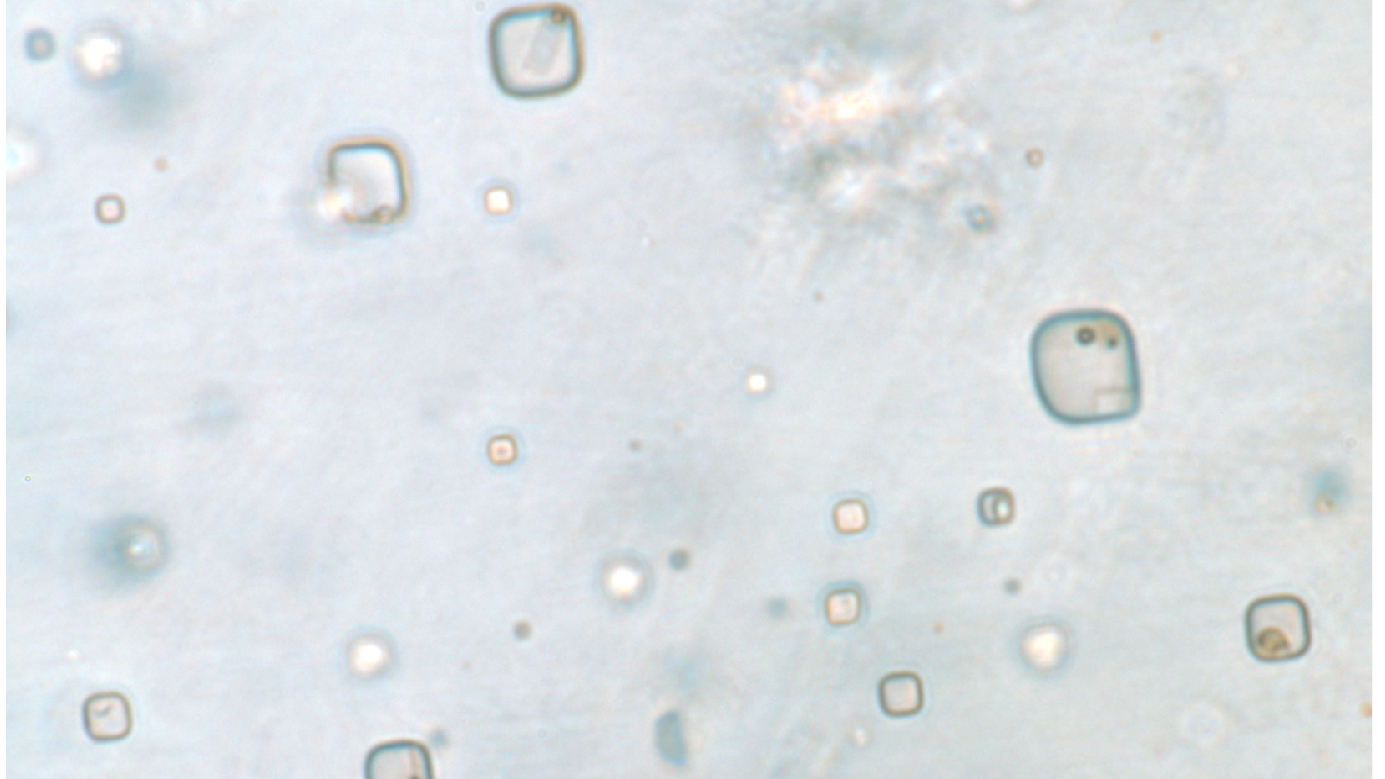 The shapes in this salt crystal are consistent with what would be expected for microorganisms.

From lemons to ham, salt is a handy food preservative. But researchers studying some really old salt crystals found them preserving something else — evidence of life.

“There are little cubes of the original liquid from which that salt grew. And the surprise for us is that we also saw shapes that are consistent with what we would expect from microorganisms,” said Kathy Benison, a geologist at West Virginia University. “And they could be still surviving within that 830-million-year-old preserved microhabitat.”

The salt crystals (aka halite) that Benison and her team studied were originally found in central Australia. Benison was part of the team that published these findings in the journal Geology.

This video of a different salt crystal shows how the liquid looks when moving inside.

Although the idea that these microorganisms could still be alive is mind-boggling, Benison said science backed it up.

“We know by studying life in modern extreme environments that there are organisms that are able to undergo, like, a survival mode, almost like a hibernation. They’re still alive, but they slow down all of their biological activities,” she said .

Benison suspects that if there are in fact microorganisms in the crystal, they could be alive in a dormant state. The halite would need to be opened in order to confirm that this is in fact organic matter, and that it is still alive.

While cracking into that crystal might seem a bold choice — we’re currently battling a global pandemic caused by microscopic viruses, after all — Benison plans to do just that. But she said there was no need to worry.

“It does sound like a really bad B-movie, but there is a lot of detailed work that’s been going on for years to try to figure out how to do that in the safest possible way,” she said.

Bonnie Baxter, a biologist at Westminster College in Salt Lake City, was not involved in the study, but still offered some comforting words.

“An environmental organism that has never seen a human is not going to have the mechanism to get inside of us and cause disease,” she said. “So I personally, from a science perspective, have no fear of that.”

Baxter said these findings weren’t just a major step in studying the origins of life on Earth, but also opened the door to finding life on other planets.

“And when we’re thinking about Mars, we’re talking about billions of years, probably, since microbial life could have been flourishing in the waters on that planet. And so we really need longer experiments in rocks that have been around longer on our planet in order to understand what could happen on Mars,” Baxter said.

And maybe, just maybe, they could move us another step closer to finding evidence of aliens.

The radio version of this piece was reported by Sacha Pfeiffer and Alisa Chang. It was produced by Michael Levitt and edited by Sarah Handel, and adapted for the web by Manuela Lopez Restrepo.