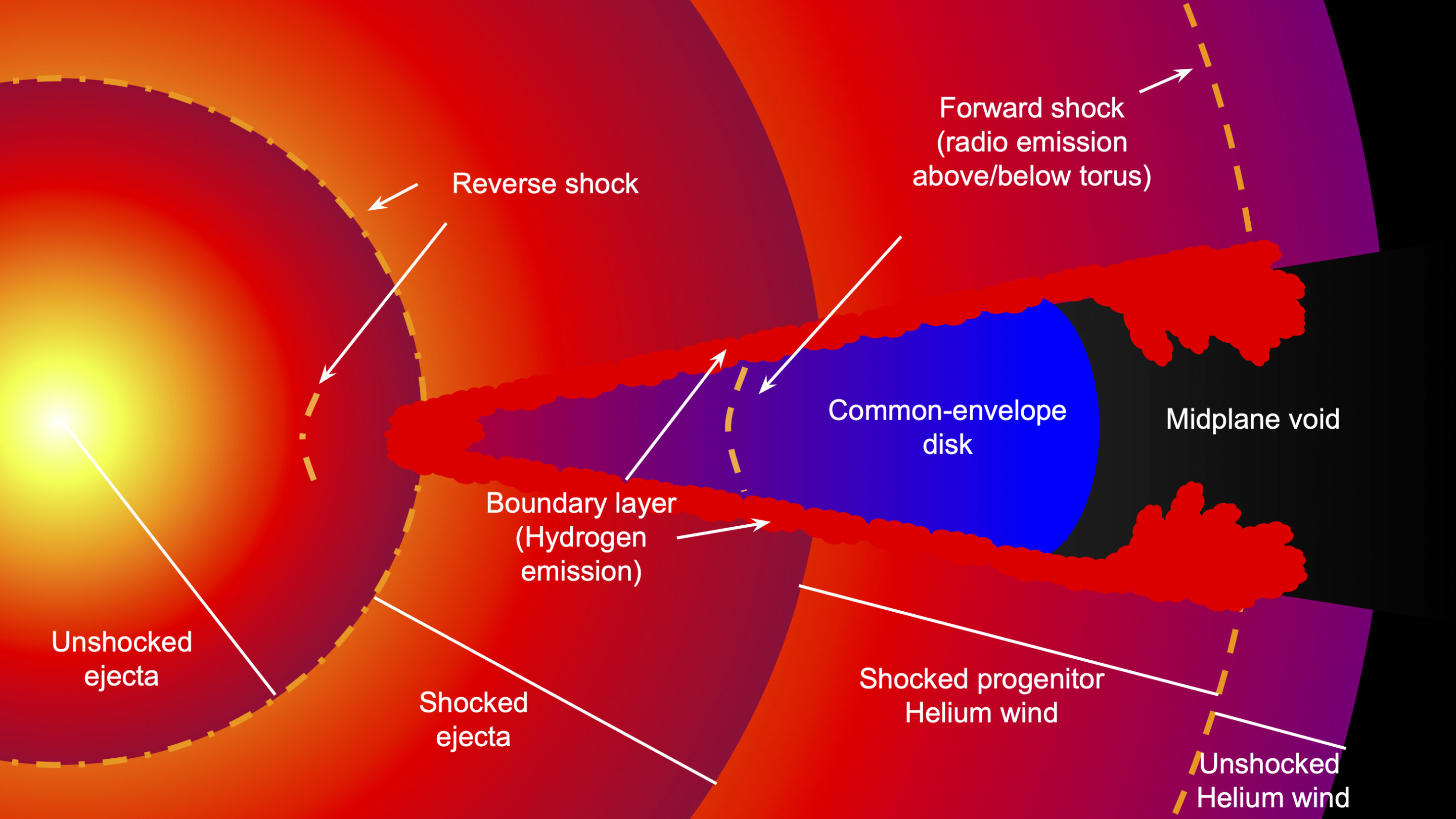 An international group of astronomers led by Benjamin Thomas of The University of Texas at Austin has used observations from the Hobby-Eberly Telescope (HET) at the university’s McDonald Observatory to unlock a puzzling mystery about a stellar explosion discovered several years ago and evolving even now . The results, published in today’s issue of The Astrophysical Journalwill help astronomers better understand the process of how massive stars live and die.

When an exploding star is first detected, astronomers around the world begin to follow it with telescopes as the light it gives off changes rapidly over time. They see the light from a supernova get brighter, eventually peak, and then start to dim. By noting the times of these peaks and valleys in the light’s brightness, called a “light curve,” as well as the characteristic wavelengths of light emitted at different times, they can deduce the physical characteristics of the system.

“I think what’s really cool about this kind of science is that we’re looking at the emission that’s coming from matter that’s been cast off from the progenitor system before it exploded as a supernova,” Thomas said. “And so this makes a sort of time machine.”

In the case of supernova 2014C, the progenitor was a binary star, a system in which two stars were orbiting each other. The more massive star evolved more quickly, expanded, and lost its outer blanket of hydrogen to the companion star. The first star’s inner core continued burning lighter chemical elements into heavier ones, until it ran out of fuel. When that happened, the outward pressure from the core that had held up the star’s great weight dropped. The star’s core collapsed, triggering a gigantic explosion.

This makes it a type of supernova astronomers call a “Type Ib.” In particular, Type Ib supernovae are characterized by not showing any hydrogen in their ejected material, at least at first.

Thomas and his team have been following SN 2014C from telescopes at McDonald Observatory since its discovery that year. Many other teams around the world also have studied it with telescopes on the ground and in space, and in different types of light, including radio waves from the ground-based Very Large Array, infrared light, and X-rays from the space-based Chandra Observatory.

But the studies of SN 2014C from all of the various telescopes did not add up into a cohesive picture of how astronomers thought a Type Ib supernova should behave.

For one thing, the optical signature from the Hobby-Eberly Telescope (HET) showed SN 2014C contained hydrogen—a surprising finding that also was discovered independently by another team using a different telescope.

“For a Type Ib supernova to begin showing hydrogen is completely weird,” Thomas said. “There’s just a handful of events that have been shown to be similar.”

For a second thing, the optical brightness (light curve) of that hydrogen was behaving strangely.

Most of the light curves from SN 2014C—radio, infrared, and X-rays—followed the expected pattern: they got brighter, peaked, and started to fall. But the optical light from the hydrogen stayed steady.

“The mystery that we’ve wrestled with has been ‘How do we fit our Texas HET observations of hydrogen and its characteristics into that [Type Ib] picture?’,” said UT Austin professor and team member J. Craig Wheeler.

The problem, the team realized, was that previous models of this system assumed that the supernova had exploded and sent out its shockwave in a spherical manner. The data from HET showed that this hypothesis was impossible—something else must have happened.

“It just would not fit into a spherically symmetric picture,” Wheeler said.

The team proposes a model where the hydrogen envelopes of the two stars in the progenitor binary system merged to form a “common-envelope configuration,” where both were contained within a single envelope of gas. The pair then expelled that envelope in an expanding, disk-like structure surrounding the two stars. When one of the stars exploded, its fast-moving ejected collided with the slow-moving disk, and also slid along the disk surface at a “boundary layer” of intermediate velocity.

The team suggests that this boundary layer is the origin of the hydrogen they detected and then studied for seven years with HET.

Thus the HET data turned out to be the key that unlocked the mystery of supernova SN 2014C.

“In a broad sense, the question of how massive stars lose their mass is the big scientific question we were pursuing,” Wheeler said. “How much mass? Where is it? When was it ejected? By what physical process? Those were the macro questions we were going after.

“And 2014C just turned out to be a really important single event that’s illustrating the process,” Wheeler said.

Provided by University of Texas at Austin