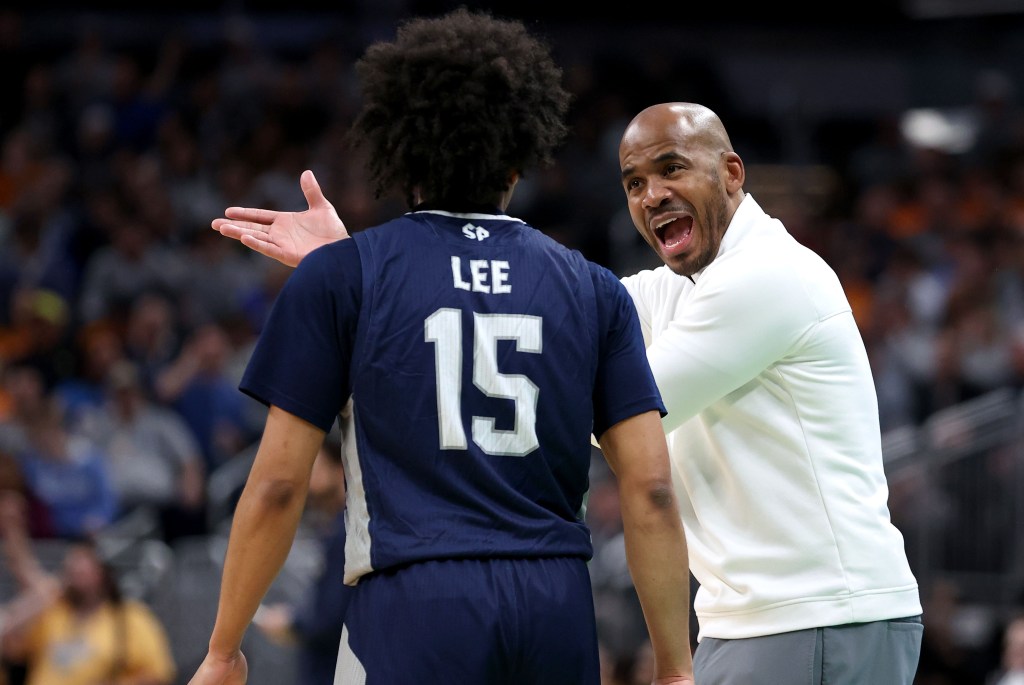 INDIANAPOLIS—Enjoy him while he’s still here.

In other words: Enjoy him for the next week, maybe two.

That must the mantra for Saint Peter’s with regard to his head coach, Shaheen Holloway.

He was a simmering commodity in the college basketball coaching community entering this NCAA Tournament because of the job he has done at Saint Peter’s.

Then he went and outcoached Kentucky coach John Calipari on Thursday and engineered his 15th-seeded Peacocks’ stunning upset of the second-seeded Wildcats.

Now look what he’s gone and done: Holloway has Saint Peter’s, which hadn’t won an NCAA Tournament game in the school’s history before Thursday, in the Sweet 16 after a 70-60 upset of No. 7-seed Murray State on Saturday night .

It now seems impossible for Saint Peter’s to retain him for a fifth year in Jersey City.

Considering the comments made by Seton Hall coach Kevin Willard after the Pirates were smoked by TCU in their first-round game Friday night in San Diego, it sounds as if there’s at least a decent chance Willard is headed for Maryland and Holloway has more than one foot in the door in South Orange, NJ, as his successor.

“If I’m not here next year, I’d love if Shaheen Holloway is here,” Willard told reporters. “That would be the happiest thing that ever happened to me.”

Willard is a mentor to Holloway, who starred at Seton Hall from 1996-200, and who worked with the Pirates coach at both Iona and at Seton Hall.

Current Seton Hall athletic director Bryan Felt was the AD at Saint Peter’s in 2018 when he hired Holloway to run the program there, and they remain close.

“Shaheen, what an incredible job he’s done,” Felt told the Asbury Park Press the other day. “When I hired him, I knew what he could do, and to do that [at Saint Peter’s] in a four-year span where you could see the improvement every year is amazing.”

You don’t have to be a world-class Wordle expert or Rubik’s Cube savant to figure out there aren’t a lot of dots to be connected here.

Sources have told The Post’s Zach Braziller that Holloway to Seton Hall is as good as a done deal whenever Willard leaves. I spent some time before Saturday’s game with family and friends of some Saint Peter’s players, and they were speaking as if they have no expectation that Holloway will still be coaching the Peacocks after this run.

And that was before the Peacocks defeated Murray State.

At the very least on Friday night, Willard sounded vague about his future at Seton Hall.

“I’ll give you exactly what I can tell you,” he said. “I have an agent who I haven’t talked to yet. I don’t know who he’s talking to, I have absolutely no idea. But when I get home [Saturday]I’ll talk to my agent and discuss things with my agent.”

Holloway, in advance of the game against Kentucky, told The Post he was not thinking about Seton Hall or any other job out there other than Saint Peter’s.

“I don’t think about stuff like that,” Holloway said. “Whatever is going to happen is going to happen. That stuff will take care of itself. Right now, I’m just focused on trying to be the best coach I can be at Saint Peter’s with these young gentleman who look up to me as I coach these guys trying to find a way to get an upset [Thursday] night.”

Well, Holloway not only found a way to get that upset Thursday night, but he schooled the more-accomplished Calipari in the process.

Then he took down a Murray State team that came into the game with the best record in the nation (31-2) and was on a 21-game winning streak.

Holloway is a nifty combination of a coach who’s demanding and confident in what he does and one who’s humble with deep caring for his players.

Confident Holloway: “We came down here on a mission,” he said Friday. “We said we were leaving on Sunday with two wins.”

Humble Holloway: “This is about the players,” he said after the win over Kentucky. “These guys put up with my nonsense every day in practice. I’m so proud of them and so happy for them because these are moments people can’t take away from them. These guys came in and took down one of the biggest schools in the country. They are going to remember this moment for the rest of their life.”

Hopefully, his Peacocks are cherishing every remaining moment they have with their coach, because if Willard leaves Seton Hall, Holloway not being hired to replace him would be a bigger upset than the two Saint Peter’s authored this week.