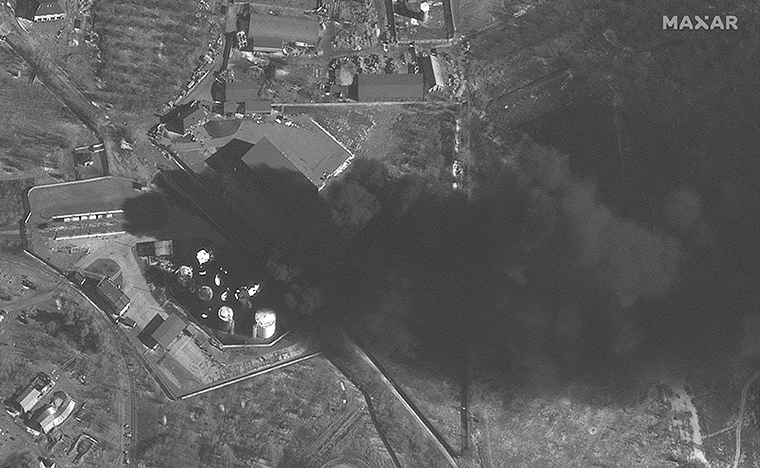 Ukrainian President Volodymyr Zelensky said about 100,000 people have been evacuated via evacuation corridors over the past two days.

“One of the main tasks for us today was the organization of humanitarian corridors,” Zelensky said in a video address posted to Facebook late Thursday night. “Sumy, Trostyanets, Krasnopillya, Irpin, Bucha, Hostomel, Izium. Almost 40,000 people have already been evacuated this day. They were given safety at last. In Poltava, Kyiv, Cherkasy, Zaporizhzhia, Dnipro, Lviv.”

He said humanitarian aid, food and medicine was delivered.

“We are doing everything to save our people in the cities that the enemy just wants to destroy,” Zelensky said.

Mariupol and Volnovakha, however, remain completely blocked, he said, adding that despite Ukrainian officials’ best efforts to make the corridor work, “Russian troops did not cease fire.” Regardless of this, Zelensky said he still decided to send a convoy of trucks carrying food, water and medicine.

“But the invaders started a tank attack exactly in the area where this corridor was supposed to be. Corridor of life. For the people of Mariupol,” the president said.

“Right now, the air bombardment of Mariupol is underway,” said Petro Andryushchenko, the adviser to the mayor of Mariupol.

“They did it consciously. They knew what they were disrupting. They have a clear order to hold Mariupol hostage, to torture it, to carry out constant bombardment,” Zelensky said.

He added: “Today they destroyed the building of the main department of the State Emergency Service in the Donetsk region. Right next to this building was the place where Mariupol residents were to gather for evacuation”

Earlier in the day, the mayor of Mariupol, Vadym Boychenko, also issued a furious video message condemning what he calls Russia’s “cynical and destructive war against humanity” and said every 30 minutes the city was invaded by Russian forces. The mayor said humanitarian aid cannot get through to Mariupol for the sixth day in a row.

Zelensky noted that the state would continue trying to bring Mariupol the aid its people “so desperately need.”