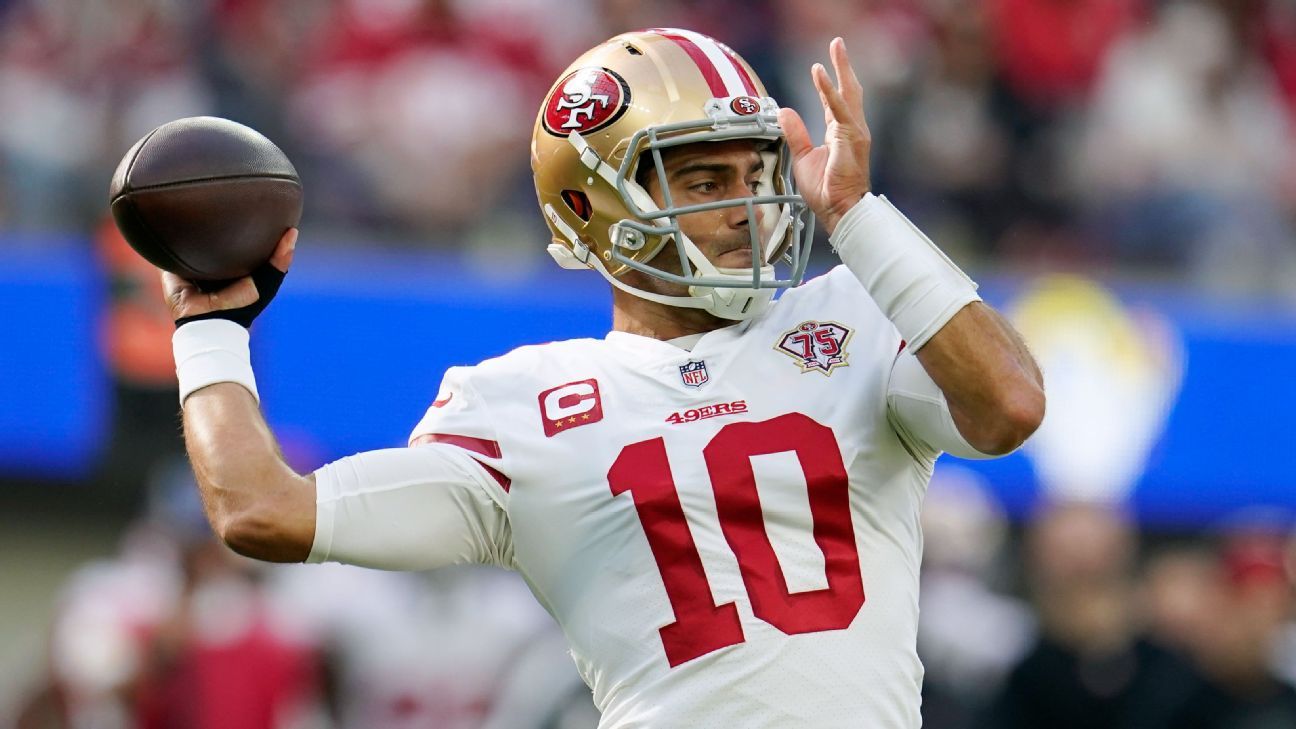 PALM BEACH, Fla. — With the expectation that a trade would be forthcoming and Trey Lance would be taking over as the team’s starting quarterback, Jimmy Garoppolo sounded certain at his Feb. 1 news conference that it would be his last as a member of the San Francisco 49ers.

Nearly two months later, Garoppolo is still with the 49ers, and that doesn’t appear to be changing any time soon. Speaking at the NFL owners meetings at The Breakers hotel, Niners general manager John Lynch made it clear he doesn’t envision a scenario in which Garoppolo will be released.

Which means the only path the Niners see for a divorce with Garoppolo this offseason will have to involve a trade market that has yet to materialize. On Monday, Lynch offered some insight into that, as well as potential scenarios in which Garoppolo would remain in San Francisco in 2022.

According to Lynch, the biggest reason Garoppolo has yet to be traded is simple: The Niners have not received a formal offer. Lynch said going into last month’s scouting combine in Indianapolis, there was momentum for a deal and the Niners had talked “conceptually” with other teams about striking an agreement (which could not have been made official until March 16).

Implied in that but later stated outright was Lynch’s denial of reports that he received an offer of two second-round picks, and Lynch said he has also not told anyone that such an offer was ever on the table.

While other quarterbacks began to move in trades and signings around the league, Lynch said Garoppolo’s right shoulder surgery is the thing that caused interested teams to put pursuit of him on hold.

“I think, ultimately, the teams that we were closest with, the surgery gave them pause and they ended up going in other directions,” Lynch said.

Garoppolo’s shoulder surgery did not catch the Niners off guard, according to Lynch, but he reiterated that both the Niners and Garoppolo were operating under the premise that rehab would be enough to get Garoppolo back to full strength. When that didn’t happen, the obvious decision was to have the surgery, which Garoppolo did in early March.

As it stands, Garoppolo, who has been rehabbing in the Los Angeles area, isn’t expected to be cleared to throw at full strength until before training camp. That means the Niners are likely to hang on to him until at least July.

Lynch acknowledged that many of the teams that initially showed interest in Garoppolo have since moved on to other quarterbacks, adding that there are teams that are still in contact, though those conversations are more “fluid.”

Which raises the question of whether Garoppolo could return to the Niners for yet another season. Garoppolo is slated to count $26.95 million against next season’s salary cap. Trading (or releasing) Garoppolo once he’s healthy would save the Niners $25.55 million in cap space. If the 49ers released Garoppolo now, they’d be on the hook for a $7.5 million injury guarantee, though that comes with offsets up to the full amount — meaning if another team signed him for that amount or more, the Niners would get that credited back on the cap.

Still, Lynch again insisted that the Niners could not only keep Garoppolo next season but also do so at his current salary.

“We value strength at that position,” Lynch said. “To be completely forthright, though, when you make a trade of that magnitude [for Lance], most of our options did not include Jimmy on our books. We our team. But you always have to adapt and a series of events happened that it didn’t work out. But that’s not a bad thing, though. We feel positive with it. And we’ll make it work.”

To that end, the Niners already had to restructure the contracts of tight end George Kittle and defensive lineman Arik Armstead to get under the salary cap and execute an offseason plan centered on adding cornerback Charvarius Ward from the Kansas City Chiefs and bolstering their special teams.

Lynch stressed that the Niners followed their plan and deleting Garoppolo from the equation wouldn’t have changed how they went about their business in free agency.

“Our plan was our plan and we were able to do everything we intended to do in free agency,” Lynch said. “We knew we wanted to fill that corner role … and a number of other deals that we could piece together. And that was our plan whether we had Jimmy or not.”

As for what would happen if Garoppolo did return, Lynch declined to offer specifics on whether that would lead to a training camp competition or how the quarterback situation would play out. He did point out that Garoppolo’s injury will keep him out long enough for Lance and veteran Nate Sudfeld to take all the reps in the offseason program.

“We’re thrilled with what Trey has shown already and where we know he is going to go,” Lynch said. “And the opportunity for growth in the offseason program. That’s just vital. Those 10,000 reps. He needs them. He’ll have that opportunity this offseason.”