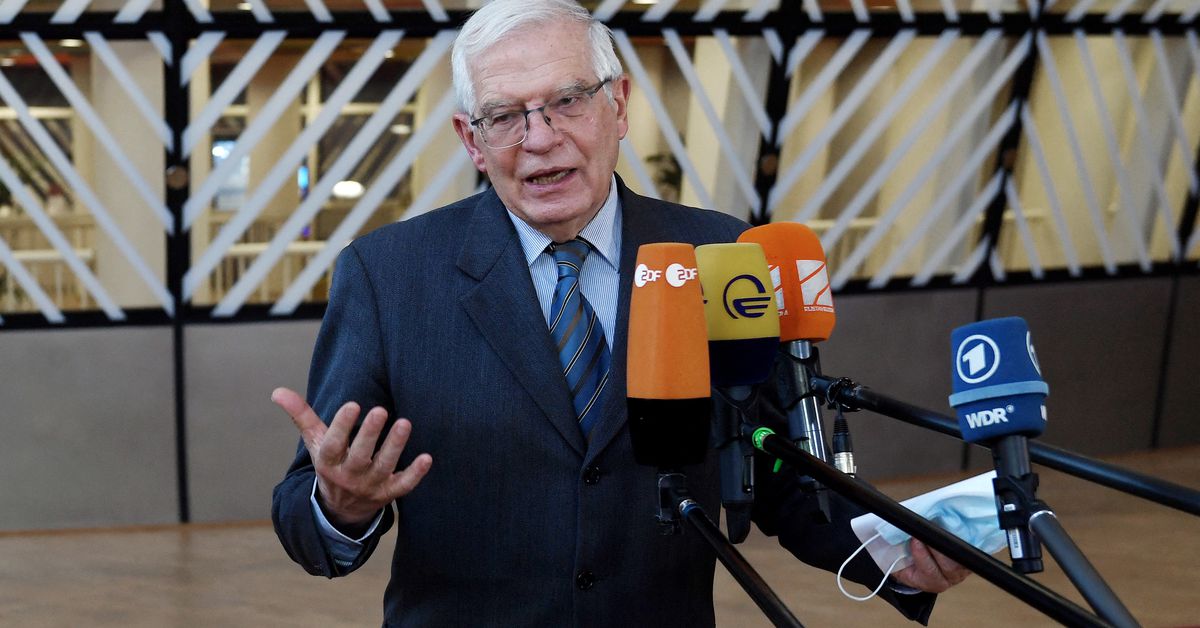 European Union for Foreign Affairs and Security Policy Josep Borrell and US State Secretary Antony Blinken (not pictured) speak to the media ahead of a meeting at the EU Council Building in Brussels, Belgium, March 4, 2022. Olivier Douliery/Pool via REUTERS

VIENNA, March 11 (Reuters) – Talks to revive the 2015 Iran nuclear deal on Friday faced the prospect of collapse after a last-minute Russian demand forced world powers to pause negotiations for an undetermined time despite having a largely completed text.

Negotiators have reached the final stages of 11 months of discussions to restore the deal, which lifted sanctions on Iran in return for curbs on its nuclear programme, long seen by the West as a cover for developing atomic bombs.

But last Saturday, Russian Foreign Minister Sergei Lavrov unexpectedly demanded sweeping guarantees that Russian trade with Iran would not be affected by sanctions imposed on Moscow over its invasion of Ukraine – a demand Western powers say is unacceptable and Washington has insisted it will not agree to.

A collapse of the talks could result in Tehran getting within sprinting distance of developing nuclear weapons, a prospect that could ignite a fresh war in the Middle East. Tehran denies it has ever sought atomic bombs.

Failure to reach a deal could also prompt the West to impose additional harsh sanctions on Iran, and further escalate world oil prices already strained by the Ukraine conflict.

“A pause in #ViennaTalks is needed, due to external factors,” European Union foreign policy chief Josep Borrell wrote on Twitter. “A final text is essentially ready and on the table.”

Tehran on Thursday suggested there were new obstacles to reviving the deal. Washington underlined that it had no intention of accommodating Russia’s demands, which it has said have nothing to do with the Iran talks. read more

A week ago preparations were being made in Vienna for a weekend meeting to conclude an agreement bringing Iran back into compliance with the deal’s restrictions on its rapidly advancing nuclear activities and bringing the United States back into the agreement it left in 2018 by re-imposing sanctions on Tehran.

Officials said they were hoping the talks would resume in the next days. A senior EU official said there were still two or three technical issues that needed to be resolved between Washington and Tehran, but those could be resolved quickly.

The official said the talks had to be paused to get a response from Moscow after it was told that its demands, which went beyond its nuclear commitments, could not be met.

“They are thinking about that reaction and in the meantime we cannot advance in the sense that we cannot finalize the negotiation,” the official said.

The US State Department said negotiating teams, including the US team led by Special Envoy Robert Malley, were returning to their capitals for consultations.

“There will need to be decisions made in places like Tehran and Moscow,” department spokesperson Ned Price told reporters at a press briefing. “If that political will is there, if that seriousness of purpose is there, we remain confident that we can achieve a mutual return to compliance in fairly short order.”

Western officials say there is common interest in avoiding a nuclear nonproliferation crisis, and until now have been on the same page as Moscow, one of the core participants of the 2015 deal, which was rubber-stamped through a resolution at the UN Security Council. All the powers negotiating with Iran, with the exception of Germany, are permanent members of the Council.

An E3 diplomat ruled out negotiating with Russia over a “broad exemption that would be extraneous” to the nuclear deal, adding that if Moscow definitively blocked the deal, other world powers would need to study alternative options.

Accusing Russia of taking the Iran nuclear talks hostage, the diplomat said there was “critical urgency” to conclude the deal as further external factors could also threaten it.

Bilateral talks between Iran, Russia and China are likely to take place to try and break the deadlock, diplomats said.

“External factors must be resolved in next few days or agreement likely to unravel,” Britain’s envoy Stephanie al-Qaq wrote on Twitter.

Russia’s envoy to the talks, Mikhail Ulyanov, dismissed suggestions that Moscow was the reason the talks had stalled.

“The conclusion of the deal does not depend on Russia only,” he told reporters after meeting EU coordinator Enrique Mora. “There are other actors who need additional time and who have additional concerns, and they are being discussed.”

Iran’s foreign ministry spokesperson Saeed Khatibzadeh said a pause in talks may create momentum for resolving outstanding issues, but he insisted external factors would not affect the will to move ahead with a collective agreement. read more

Appearing to back Moscow, China’s envoy Wang Qun said negotiations couldn’t be conducted under a “political vacuum” and that all sides’ demands needed to be considered.

Russia’s demand initially angered Tehran and appeared to help it and Washington move towards agreement on the few remaining thorny issues, diplomats said. But a sudden volley of public comments by Iranian officials including Supreme Leader Ali Khamenei on Thursday suggested the wind had turned.

Negotiators from France, Britain and Germany had left a week ago, believing they had gone as far as they could and it was now up to the United States and Iran to agree on outstanding issues.

“We are at the level of negotiating footnotes,” the EU official said. He said issues such as which sanctions the United States would lift had been agreed, although how they would lifted was still under discussion.

The negotiations in Vienna have limped on with just a fraction of the number of daily meetings that were taking place in previous weeks. Four Western diplomats had said the talks were all but finalized until Russia made its demands.

“I think there’s still a clear path to reviving the deal given that the US and Iran appear to be on the same page,” Henry Rome, Iran analyst at consultancy Eurasia group, said.

“But it will require a healthy dose of creativity and flexibility from all parties to find a way to work with, or more likely around, Moscow.”