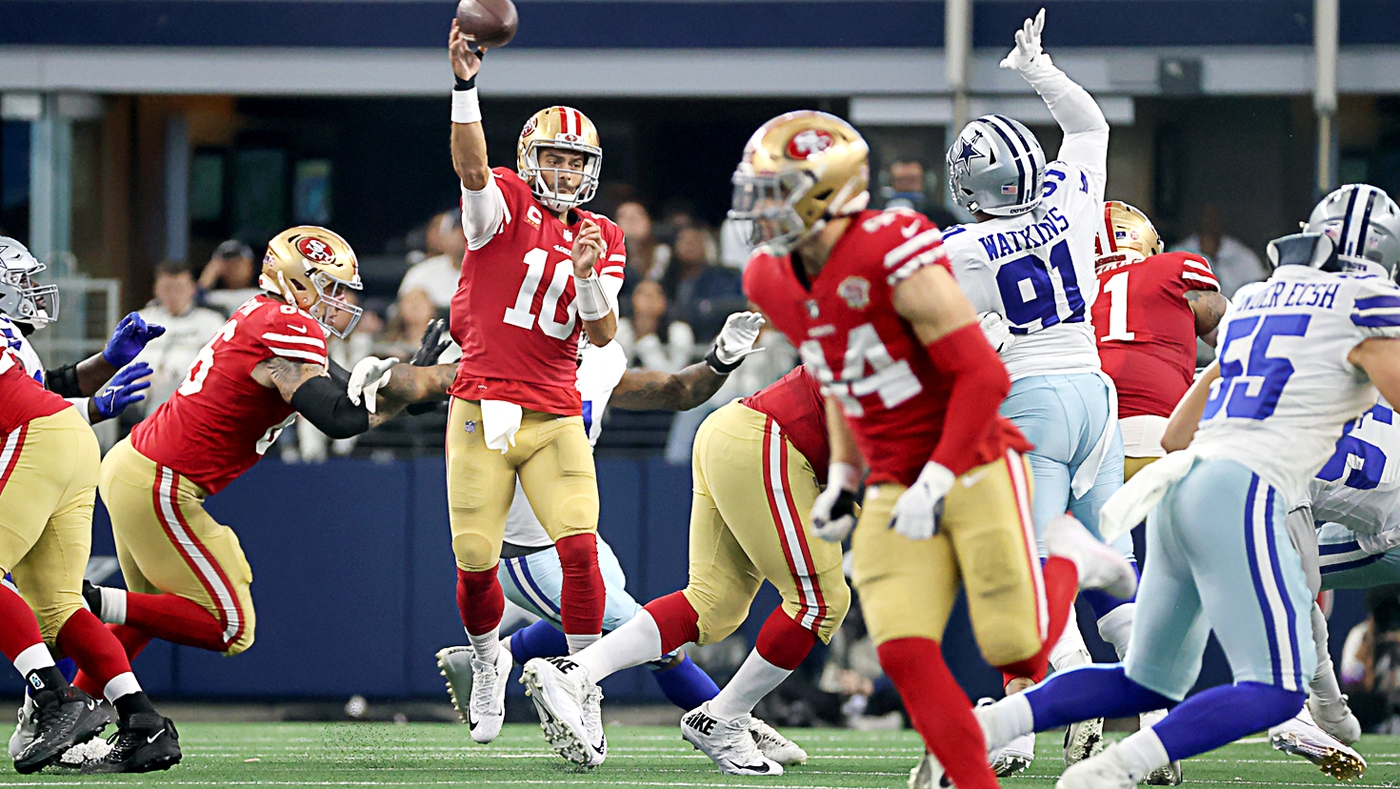 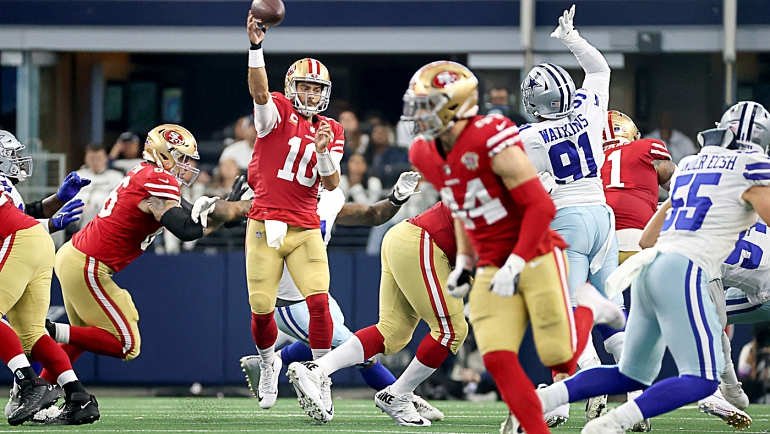 On Monday, general manager John Lynch said the San Francisco 49ers don’t foresee releasing quarterback Jimmy Garoppolo. Instead, they are holding onto hope that a trade partner will emerge at some point this offseason. For now, the options are almost nonexistent.

Most anticipated Garoppolo would be gone by March 16, the start of the new league year. The quarterback remains on the 49ers roster. Garoppolo recently underwent shoulder surgery, seemingly plummeting his trade value.

For now, the 49ers are content playing the waiting game. Lynch admitted that the team hadn’t received a firm offer for the veteran quarterback. And San Francisco is unwilling to give Garoppolo away.

“There were a ton of conversations and I think there was real good momentum,” Lynch said on Monday at the NFL owners meetings. “Then, the decision that was made for Jimmy to have surgery certainly caused a lot of teams to pause and at least slow down the process to do their due diligence.”

Ian Rapoport, also speaking from the owners meetings, says the 49ers shouldn’t panic or feel the need to release Garoppolo.

“You take a look at his contract, more than $25 million,” Rapoport explained. “None of it is guaranteed. So really, they hold a lot of the cards as far as where Jimmy Garoppolo is going to play in the future and how much money he’s going to make.

“And he has, of course, been the subject of trade talks for the last several months. The fact that he had surgery on his throwing shoulder certainly slowed things down. In fact, before the Indianapolis Colts traded for Matt Ryan, they went back and revisited some trade talks with the San Francisco 49ers. [Those talks] did not go anywhere.”

The 49ers were reportedly working with Garoppolo to find him a good landing spot—one where he could start and potentially win.

“I just want to go to a place where they want to win,” Garoppolo said after the season. “That’s really what I’m in this game for. I’m here to play football. I’m here to win football games.”

Most quarterback-needy teams have filled those needs. Rapoport sees one somewhat realistic option remaining … and one not so realistic one.

“So now, really, there are two spots that Jimmy Garoppolo could potentially go,” Rapoport said. “One, the Seattle Seahawks. Hard to imagine they’d trade him in-division. The other? The Carolina Panthers.”

While it’s probably not ideal, the 49ers have hinted that they are prepared to carry Garoppolo and Lance into 2022, if necessary. No one actually believes that will happen, though. Of course, most also felt confident that Garoppolo would be on another roster by now.

“It is certainly conceivable that the 49ers, if they are not able to do a trade before the draft, just hold on to Garoppolo, potentially even maybe allow him to come to [training] camp, and see where it all shakes out,” Rapoport added. “A lot of options still on the table. It could be a trade. It could be a pay cut.

“It’s hard to imagine an outright release because having a quarterback, especially one with that kind of experience, is much too valuable.”

San Francisco 49ers general manager John Lynch spoke with reporters on Monday at the owners meetings. Obviously, the media wanted to know his thoughts on the Jimmy Garoppolo situation. No one expected Garoppolo to still be on the roster. Most felt that he and his over $25 million salary would have been traded by the start of the new league year on March 16. That didn’t happen. Both Garoppolo and his hefty salary remain a part of the team. With the list of quarterback-needy teams diminished, the 49ers’ current predicament left many wondering if the organization might opt ​​to release Garoppolo to get his salary off the books. According to NBC Sports Bay Area, Lynch said he doesn’t envision a scenario in which the 49ers release Garoppolo just to free up

Things have not turned out well for the San Francisco 49ers regarding quarterback Jimmy Garoppolo’s trade market. With the first wave of free agency in the books, most felt the veteran passer would be on another roster by now. That hasn’t happened. Garoppolo and his over $25 million salary remain on the 49ers’ payroll, and one NFL insider isn’t so sure that will change anytime soon. Most quarterback-needy teams have brought in new starters. The few who remain are in no hurry to overpay for a high-priced Garoppolo, who is just two weeks removed from shoulder surgery. There was a rumor from Pro Football Talk that general manager John Lynch was telling teams the

The San Francisco 49ers are officially under the 2022 salary cap of $208.2 million, which goes into effect on Wednesday at 1 pm PT. The team got here by restructuring the contracts of two star players—tight end George Kittle and defensive lineman Arik Armstead. The salary-cap maneuvering allows the 49ers to be patient with Jimmy Garoppolo and await a resolution to the Deshaun Watson situation before pushing to complete a trade of their veteran quarterback. Jim Trotter discussed the 49ers’ situation on NFL Network, saying the team is not panicking by the less-than-expected interest in their starting quarterback of the past four-and-a-half

The 49ers have begun their free agency period, signing cornerback Charvarius Ward to a three-year deal, linebacker Oren Burks to a two-year deal, and defensive tackle Hassan Ridgeway to a one-year deal on Wednesday. However, quarterback Jimmy Garoppolo is still around. Tune into 49ers RedZone co-hosts Rohan Chakravarthi and Marco Martinez making sense of the 49ers’ offseason