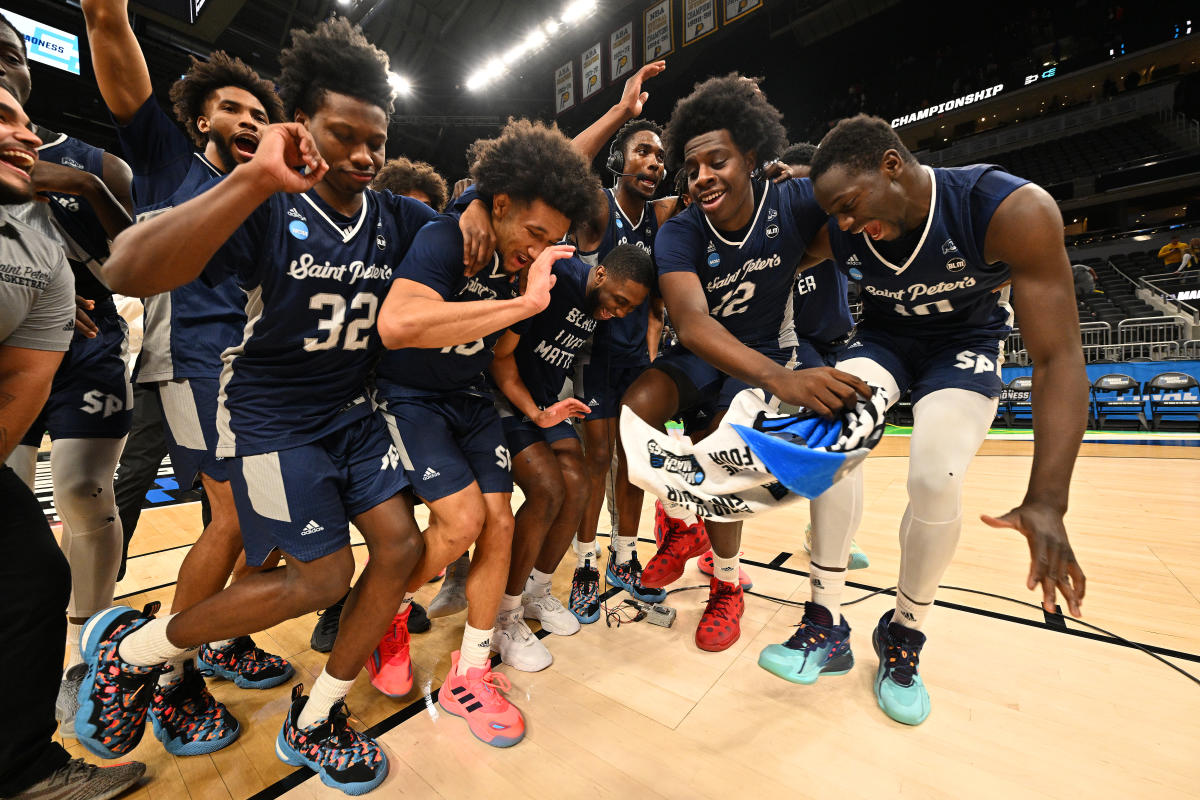 JERSEY CITY, NJ — When Adebusuyi “Boo-Boo” Shittu enrolled at Saint Peter’s University this past fall, he didn’t expect this. Neither did Gene O’Connell, who played on the Peacocks’ team that beat Duke at Madison Square Garden in 1968, or Brooke Boutchie, a defender on the women’s soccer team, or Olyvia Smith, an outfielder for the softball team who is also dating star guard Doug Edert.

None of them, nor the other 800-plus fans who packed the Run Baby Run Arena – yes, that’s the name – in downtown Jersey City, thought St. Peter’s would become only the third No. 15 seed to make the Sweet 16 of the men’s NCAA tournament.

But they did. Shock, awe and utter elation erupted when St. Peter’s beat the Murray State Racers, 70-60 on Saturday night. The Peacocks never trailed from start to finish and the fans in attendance—a third of the university’s student population—never stopped cheering for the duration of the game.

You won’t ever mistake Run Baby Run for Cameron Indoor, but for one night it was the pinnacle of basketball fandom. Students strutted like peacocks every time KC Ndefo sunk or blocked a shot. An Edert bighead emerged whenever he made a major play. Some members of the men’s swim team even stripped to their blue Speedos at halftime. Everyone in the arena cheered like it was the biggest game of all time.

Because for St. Peter’s, it was.

This was the Peacock’s fourth NCAA tournament appearance and first since 2011. The Kentucky upset was the school’s first win in the Big Dance. Prior to this year, the biggest win in school history took place 54 years ago when the Peacocks upset No. 10 Duke, 100-71, in the National Invitational Tournament on March 18, 1968.

“This is the best team St. Peter’s ever had — putting us in second place,” O’Connell, who was a forward on that 1968 team, said. “It’s so exciting. My hat’s off to this team. They’re gutsy. It’s remarkable.”

O’Connell watched and cheered with his grandson, Harry Baughman. The two always go to St. Peter’s home games, but Saturday night was something different. It was special. And it left the two speechless.

“They got a helluva coach. He’s an amazing, amazing man,” O’Connell said. “It certainly puts them on the map. Now, can they stay there? It’s up to the kids.”

Whenever anyone asked Brooke Boutchie about the school she goes to, she’d always explain that St. Peter’s is “just a small school in New Jersey, right next to New York.”

“Now, you don’t have to say that anymore,” Boutchie, a defender on the soccer team, said. “Now all you have to say is St. Peter’s University and everybody knows what you’re talking about. Our basketball team put us on the map.”

Shittu, a freshman computer science major, grew up watching the NCAA tournament. He passionately followed Duke as a kid and cheers for the Blue Devils to this day. When he came to St. Peter’s, he didn’t think of it as a school known for its sports. He’d never even been to a basketball game and didn’t know the team well. But when he watched the Peacocks shock Kentucky in the first round on Thursday, he couldn’t look away.

“I’d never seen them before I came here so to see them play this as well as they’ve played is crazy to me. I never thought it would happen,” Shittu said. “It’s crazy. These guys deserve it. I never would have imagined this.”

The strutting will continue in Jersey City, at least for another few days. The Peacocks play the winner of Sunday night’s matchup between No. 3 Purdue and No. 6 Texas. Next week will be a tough matchup, for sure, but not one the Peacock fans seem too worried about yet.

“This is insane for St. Peter’s. Everyone disrespects us,” Justin Funari, one of the stripping swimmers, said. “But we’re here! St. Peter’s is here!”