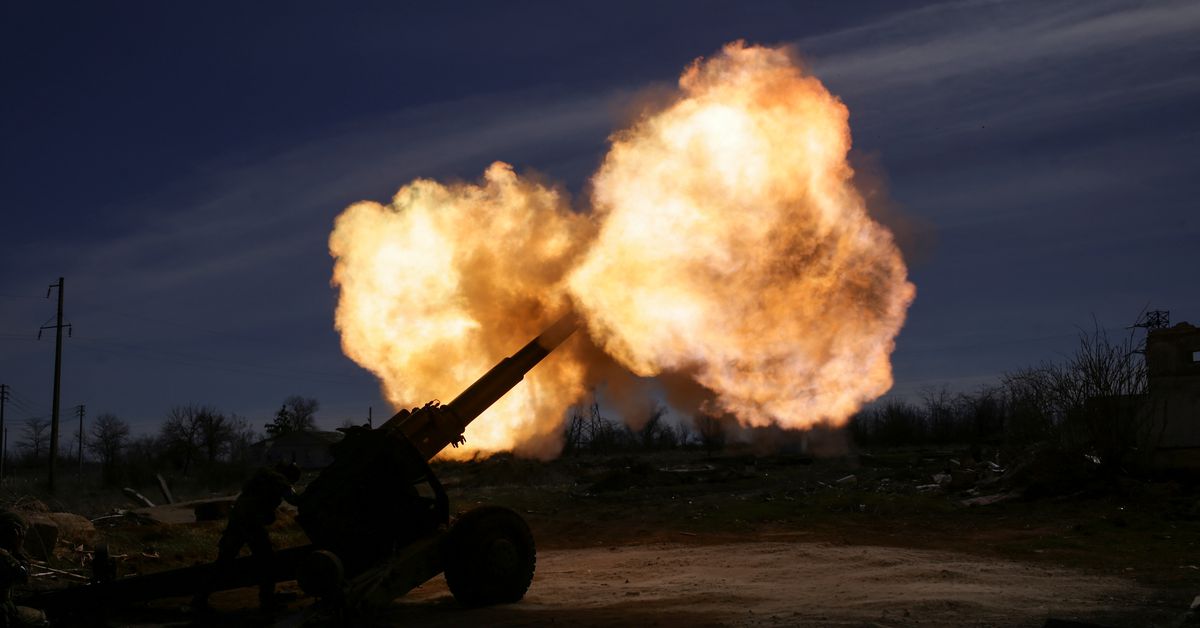 LVIV/ISTANBUL, March 29 (Reuters) – Air raid sirens sounded across Ukraine before dawn on Tuesday as Ukrainian and Russian negotiators met in Turkey for the first face-to-face talks in nearly three weeks, with Kyiv seeking a ceasefire without compromising on territory or sovereignty.

Turkish President Tayyip Erdogan welcomed delegations from both sides saying that “stopping this tragedy” was up to them.

Ukrainian television reported the talks had begun with “a cold welcome” and no handshake between the delegations.

Ukraine and the United States hold little hope of an immediate breakthrough. But the resumption of face-to-face talks is an important first step towards a ceasefire in a Russian invasion that is stalled on most fronts but inflicting horrible suffering on civilians trapped in besieged cities.

More than a month into the war, the biggest attack on a European nation since World War Two, more than 3.8 million people have fled abroad, thousands have been killed and injured, and Russia’s economy has been pummeled by sanctions.

In the besieged southern port city of Mariupol nearly 5,000 people have been killed, including about 210 children, according to figures from the mayor. Such figures cannot be verified.

Survivors have told harrowing tales of people dying from lack of medical treatment, bodies being buried wherever space could be found, and women giving birth in basements.

Ukrainian Foreign Minister Dmytro Kuleba said of the talks in Turkey: “We are not trading people, land or sovereignty.”

“The minimum program will be humanitarian questions, and the maximum program is reaching an agreement on a ceasefire,” he said on national television.

Kremlin spokesperson Dmitry Peskov said talks so far had not yielded any substantial progress but it was important they continued in person.

Footage from inside the Dolmabahce palace in Istanbul where the talks took place showed Russian billionaire Roman Abramovich in attendance, though it was not immediately clear in what role. Abramovich appears to have tried to act as a go-between, including during a trip to Ukraine early in the conflict when he and several Ukrainian negotiators are said to have fallen ill.

“The enemy continues to vilely carry out missile and bomb strikes in an attempt to completely destroy the infrastructure and residential areas of Ukrainian cities,” the Ukraine military’s general staff said. “(They) focus on fuel storage facilities in order to complicate logistics and create the conditions for a humanitarian crisis.”

In an address on Monday night, Ukrainian President Volodymyr Zelenskiy repeated calls for the West to go further in punishing Moscow for its invasion.

“We, people who are alive, have to wait. Doesn’t everything the Russia military has done to date warrant an oil embargo?”

While Western countries have imposed hard-hitting sanctions upon Moscow, Europe is heavily relying on energy imports from Russia and has been so far reluctant to act to block them.

US and German government officials are due to meet in Berlin this week with energy industry executives to discuss ways to boost alternative supplies for Germany. The Kremlin has demanded the West pay for Russian gas in roubles, not euros, but is trying to decide a mechanism for this. read more

In besieged Ukrainian cities where conditions are desperate, the threat of Russian attacks has blocked exit routes for civilians. In Mariupol, the mayor said about 160,000 people were still trapped.

“There is no food for the children, especially the infants. They delivered babies in bases because women had nowhere to go to give birth, all the maternity hospitals were destroyed,” a grocery worker from Mariupol who gave her name only as Nataliia told Reuters after reaching nearby Zaporizhzhia.

Russia calls its actions in Ukraine a “special military operation” to disarm and “denazify” its neighbour. Ukraine and the West say Putin launched an unprovoked war of aggression.

Since the last in-person talks were held on March 10, when Russian foreign minister Sergei Lavrov said a ceasefire was not even on the agenda, momentum on the battlefield has shifted in Ukraine’s favour, giving Ukrainian officials some hope that Russia could be prepared to negotiate an end to fighting.

“We have destroyed the myth of the invincible Russian army. We are resisting against the aggression of one of the strongest armies in the world and have succeeded in making them change their goals,” Kyiv Mayor Vitali Klitschko said.

Russia’s military signaled last week it would concentrate on expanding separatist-held territory in southeastern Ukraine. Kyiv says Russian troops continue to try to surround the capital, although Ukrainians have been pushing them back there, in the south and in the northeast.

The sides have held talks via video link in recent weeks and both have publicly discussed a formula under which Ukraine might accept some kind of neutral status.

But neither side has budgeted over Russia’s territorial demands, including Crimea, which Moscow seized and annexed in 2014, and eastern territories known as the Donbas, which Moscow demands Kyiv cede to pro-Russian separatists.