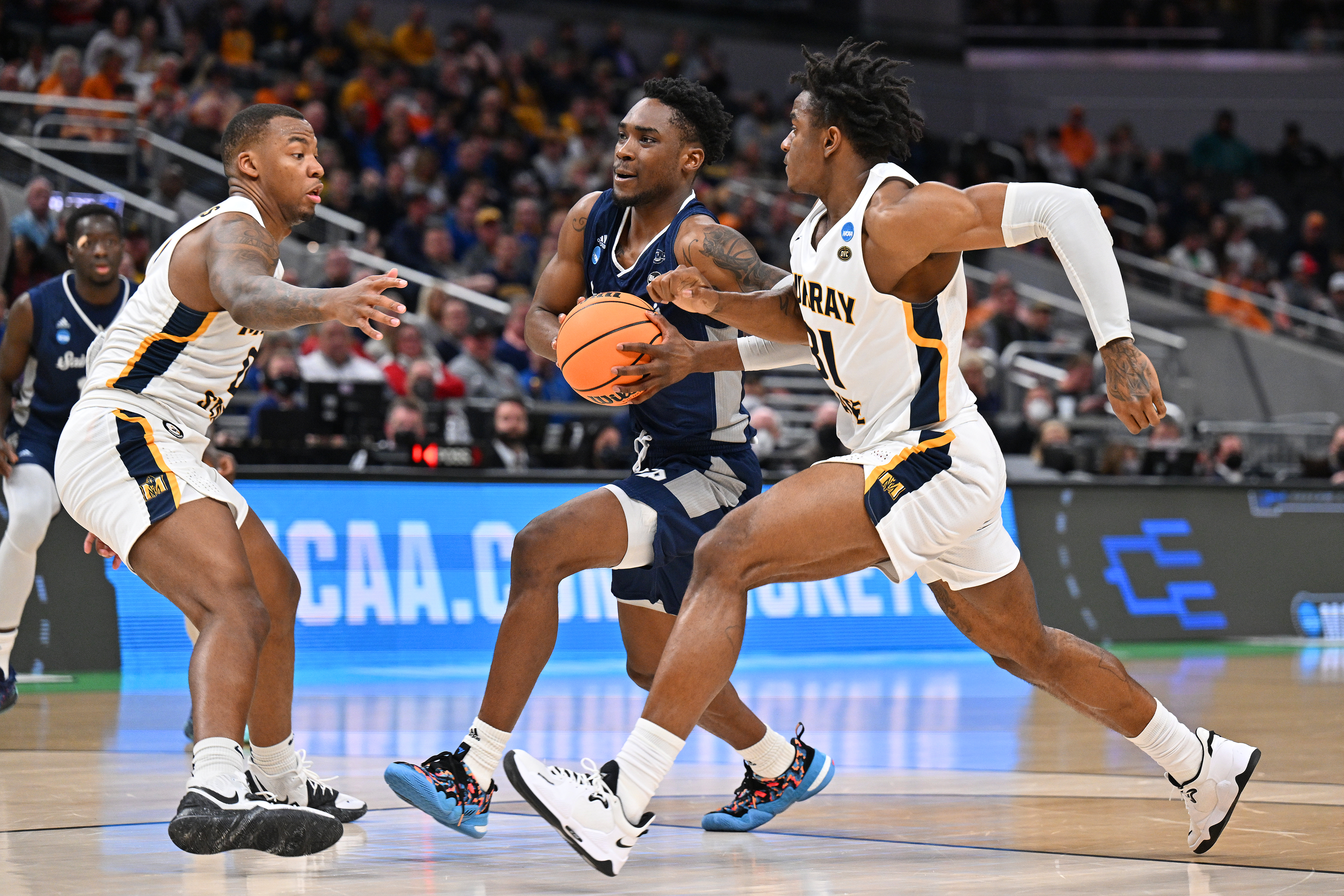 The No. 15 Saint Peter’s Peacocks continued their Cinderella run by defeating the No. 7 Murray State Racers 70-60 in the men’s NCAA tournament second round on Saturday.

PEACOCKS KEEP THEIR DREAM RUN ALIVE 🦚⁰⁰No. 15 Saint Peter’s is in the Sweet 16 after beating No. 7 Murray State, 70-60 pic.twitter.com/dJYUeL0bAo

KC Ndefo led the way with 17 points, 10 rebounds and six blocks as Saint Peter’s improved to 21-11. With the win, the Peacocks have reached the Sweet 16 for the first time in program history. Saint Peter’s had the biggest upset of March Madness with a win over second-seeded Kentucky in the first round on Thursday.

St. Peter’s does not have a single player on their roster that was ranked coming out of high school.

They just beat Kentucky and Murray State to advance to the Sweet 16. pic.twitter.com/dG2LeHRfWh

Murray State’s season comes to an end at 31-3. The Racers had their 21-game winning streak snapped with the loss. Justice Hill led the way with a team-high 19 points.

The Peacocks were facing one of the best offenses in the nation, so they decided to slow the game down by turning it into a slugfest. Saint Peter’s relied on its big men on both ends of the floor to get the job done.

Ndefo was a force all game, dominating in the low post on offense and anchoring Saint Peter’s interior defense. He was able to get good looks in the paint, which eventually opened things up for his teammates to slash to the basket for layups or spot up for jumpers.

The Racers are used to playing uptempo and averaged 79.3 points per game this season. But the Peacocks didn’t allow them to get out and run in transition like they usually do.

EVER SEEN A PEACOCK FLY!? 🦚

When Murray State cut the lead to two with just over four minutes left, Doug Edert came up with a couple of clutch baskets to help put the game away. Saint Peter’s closed the game on an 11-3 run.

In addition to Ndefo, forwards Hassan Drame and Clarence Rupert played strong defense and also combined for 15 points on 6-of-11 shooting. The Saint Peter’s bigs did a great job of pressing the Murray State frontcourt and forcing them into foul trouble. The Peacocks shot 23-of-31 from the free-throw line and won the rebounding battle 38-31.

As Saint Peter’s moves forward in the tournament, it will continue to rely on its frontcourt to make the game ugly for opponents on both ends. The Peacocks will continue to be a dangerous team as long as they’re able to control the game and play through their big men.

It was a surprise to see the Racers struggle as much as they did on Saturday. Murray State is known for its potent offensive efficiency but couldn’t find its rhythm against Saint Peter’s.

The Racers couldn’t get out on the fast break as much as they had hoped to thanks to the Peacocks slowing down the tempo. With no easy looks at the basket, Murray State turned to its outside shooting. But the three-pointers weren’t falling either, and the Racers finished 8-of-24 from beyond the arc.

Four players scored in double figures for Murray State, but they all lacked efficiency. The Racers shot 18-of-52 (34.6 percent) from the field in the loss.

It was an unfortunate time for the team’s usually dominant offense to run out of gas. But Murray State just couldn’t find his footing with Saint Peter’s controlling the pace of the game.