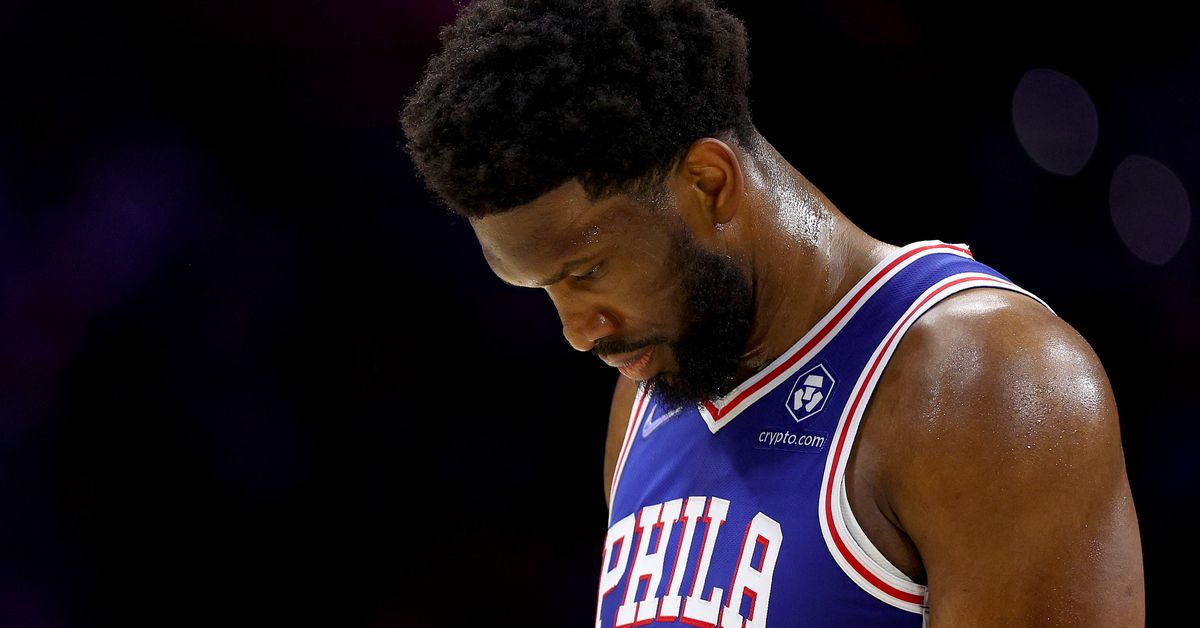 In the end, it was the perfect game.

The Nets not only destroyed the Sixers by 29, but their former teammate. the one who demanded to be traded at the deadline, looked positively ill, scoring only 11 points as he hit 3 of his 17 shots. Finally, not only did Philly’s famously fickle fan base wind up booing their own team, but the small contingent of Nets fans who drove I-95 dominated the Wells Fargo Center, their chants of “Broook-lyn” and “Where’s Harden?” heard across America on the nationally televised game. Oh yeah, the win also made Ben Simmons smile…a lot…from the bench.

“Guys rose to the occasion, we got a second win in a row, and let’s see if we can keep building,” Steve Nash said. “I think it’s great for our confidence. We’ve had such a rough stretch here with injuries and we’re trying to put this thing together and build some cohesion and understanding.

“It brings everyone together a little bit and gives us belief and confidence in what we’re trying to do.”

In the end, Brooklyn was led by two of its new “Big Three” — Kevin Durant and Kyrie Irving — but also got contributions from the two players who were included in the February 10 blockbuster trade deadline move: Seth Curry and Andre Drummond.

“It was a good environment to start, but it didn’t finish that way,” Durant said, referring to how the Sixers and their fans were worn down by the Nets superior play. “It didn’t feel like that when we left the court. It felt like a regular game, like I’ve been saying.

“But I liked how we approached the game, and played with physicality and didn’t let any of that stuff affect what we wanted to do. The crowd, no matter who we played tonight, I felt like we were locked in.”

KD finished with one of those “you-know-who-I-am” games, scoring 25 points and grabbing 14 rebounds to go along with seven assists. It was his 12th double-double of the season, third in four games vs. the Sixers. Durant finished with an efficient 10-of-17 night, including 3-of-6 from deep. He also had two steals and a block and in the battle of MVP candidates.

Kyrie Irving, who scored 50 two nights ago in Charlotte, had 22 and like his superstar buddy, had an efficient game, shooting 8-of-17 and 5-of-11 while adding five boards and four assists.

But the big surprise of the night came from Seth Curry who along with Andre Drummond were included in the February 10 trade for James Harden and Paul Millsap. Curry had his best game as a Net with 24 points on 10-of-14 shooting, including four three’s. He also stole the ball five times.

“Sean (Marks) wanted me for a reason — They trust me,” Curry said post-game, adding, “We’re getting better — It’s just a regular season game, but it’s a big stepping stone for us.”.

The Nets also got double figure games from James Johnson (16), Bruce Brown (11) and Patty Mills (10). The two Nets bigs assigned to Embiid — Andre Drummond and Nic Claxton — not only did a solid job defending the 7’2” big who shot on 5-of-17 from the floor, but scored a combined 16 points and grabbed 15 boards between them.

In fact, Curry and Drummond finished with a total of 31 points, only seven shy of what Harden and Embiid put together.

The win also destroyed the pregame narrative that Philly’s famously fickle fans would have their way with Simmons, make him miserable even though he wasn’t playing. They have it in for him after he had held out for most of the season, hoping to get out of the City of Brotherly Love. While the Philly boo birds treated Simmons mercilessly when he came out for shootaround, when he accompanied the team to the bench before the game and when he touched an errant pass late, he and his teammates had the last laugh literally as the Nets bench wound up wings of smiles.

“It was lovely. I enjoyed it,” Irving said after the win. “It’s great for our league when you can build up that many emotions on a night like tonight. I felt like we committed ourselves to playing aggressive defense. …When you step foot in an environment like this, we knew there were going to be high-intense fans and wanted to relish in it.”

He added the hate directed at Simmons by Philly played a role in the Nets performance.

“It’s not an individual thing for us. We all felt it. We’re all there. If you come at Ben, you come at us,” said Irving post-game.

Durant told the media much the same thing.

“We look at Ben as our brother … it’s hard for you to chant at Ben Simmons when you’re losing that much,” said Durant.

At one point in the first quarter, when Philly fans began to chant, “F*ck Ben Simmons,” Durant strode down the lane and shut up the fans with a dunk. Irving then hit back-to-back threes.

It was a wire-to-wire win for Brooklyn. The Nets came out the gates swinging in the first quarter. Brooklyn canned 17 of their first 26 looks for 40 points. Irving and Kevin were both preposterous, posting a combined 9-of-11 from the field. Curry, enjoying a revenge game of his own against his former employer (and his father-in-law, Doc Rivers), put up nine points of his own. James Harden, meanwhile, had what could best be described as the opposite of a revenge showing, going just 1-of-6 in the first quarter.

From there, it went downhill for the Sixers. They went down by 21 at the half (72-51), then after a ridiculous third quarter, were out of it, heading into the fourth with a 32-point deficit. At one point, the lead ballooned to 36 and Sixers fans exited the building a disgruntled bunch.

Durant praised the contingent of Nets fans who traveled by bus from Barclays Center.

“Our fans traveled,” said KD. “It was pretty remarkable to see Brooklyn fans because the label on us is that we don’t have any fans. So hear them in a huge arena like this, fighting against another energetic crowd, like the Sixers fans. I’m starting to see it more and more. last couple of years since I’ve been here. that fans are starting to travel. We’re going to need that going forward.”

Although so much of the recaps will be about the Nets offense, which registered shooting splits of 56 percent overall and 45 percent from deep, the Nets defense suffocated the Sixers, holding them to 32.3 percent (30-of-93) while recording 13 steals and 15 blocks. five by James Johnson and three each by Claxton and Drummond.

By the night’s end, the Nets were 34-33, still in eighth place in the East but only two games out of seventh where the Raptors sit with a two-game advantage over the ninth and tenth teams in the NBA’s play-in format.

For the Sixers, particularly Harden, it was simply a bad game.

“We got our [butt] kicked,” Harden said post-game.

A Philadelphia fan who has been yelling toward Nets’ Ben Simmons has been removed from his seat to exit the arena.

After the game, the Brooklyn Brigade members who cheered their team from the stands gathered in back of the Nets bench and sang, “Ben Sim—mons.”

Before the game, as he weathered the storm of boos during shootaround, Ben Simmons stood next to fellow Aussie, Patty Mills. Mills has famously said he has Simmons back. After watching the win in Philly, Simmons fiancee and Mills wife celebrated on Instagram.

With Reggie Miller calling the game, James Harden passed the Pacers sharpshooter in all time 3-point shooting. Harden now has 2,561, one more than Miller.

Patty Mills hit two three’s as well, giving him 200 for the season. He becomes the fourth Net to hit that milestone, behind only D’Angelo Russell (234), Joe Harris (211) and Allen Crabbe (201) in the Nets annals. He has 16 games to surpass DLo and is averaging around three makes a game.

Call-up from Long Island, but not by the Nets

Tyrone Wallace, who’s been tearing it up for the Long Island Nets, got called up Thursday by the Pelicans, per Adrian Wojnarowski.

The call-up could be a blow for Long Island’s G League title hopes. Wallace teamed with Craig Randall II, providing the young Nets a solid backcourt. Wallace, 27, had previously played with the Clippers and Hawks.

If his turn with New Orleans doesn’t work out, Wallace can return to Long Island who retains his G League rights.

The Nets return to Brooklyn on Sunday to play their traditional rivals, the Knicks. Kyrie Irving won’t be eligible and Ben Simmons is not likely to play as well. Steve Nash said post-game that Simmons won’t be playing 5-on-5 or be a full participant in Saturday’s practice. The game is a matinee affair, starting at 1 pm

For a different perspective on Thursday’s game, check out Liberty Ballers — our sister site covering the Sixers … but be gentle.