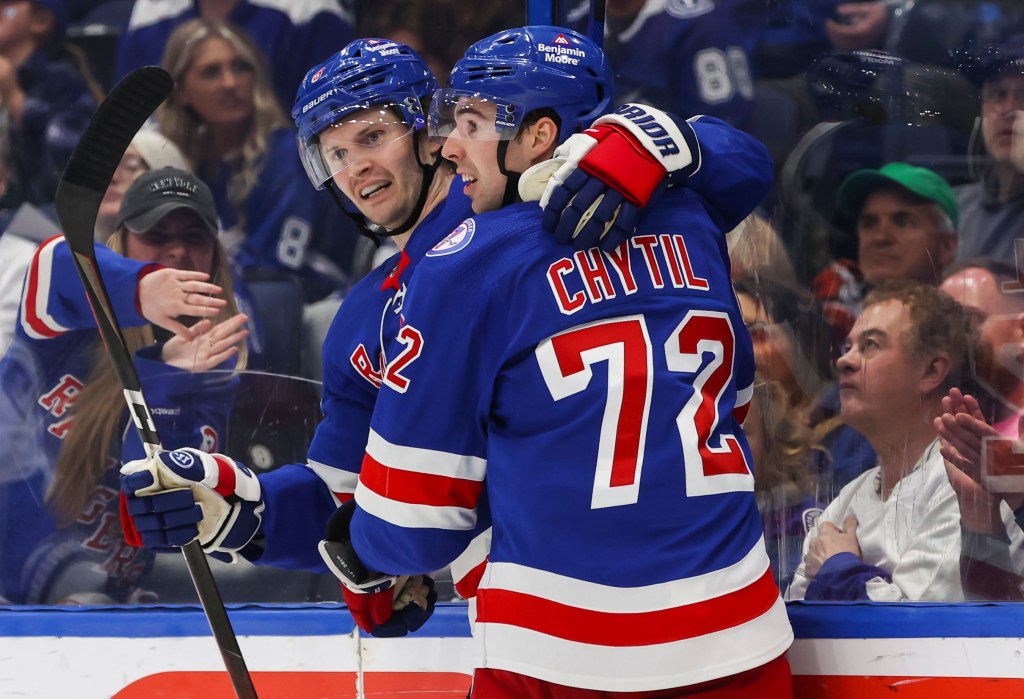 TAMPA, Fla. — The Lightning play a fast-paced, north-south game that many other NHL teams simply can’t keep up with — but the Rangers have proven all season long that they can.

In more ways than one, the Rangers went toe-to-toe with the two-time defending Stanley Cup champions. And despite a rare off-night for the power play, it still came up clutch when Mika Zibanejad blasted a one-timer late in the third period to give the Rangers a 2-1 win Saturday night at Amalie Arena.

“We played the way we want to play, and I think we’re finding our game and everybody’s enjoying it,” head coach Gerard Gallant said after the win, which completed a three-game sweep of the Lightning this season in front of a heap of fans in red, white and blue, whose pro-Rangers chants drowned out everything else. “That was another battle, low-scoring, playoff-type of game again tonight.

“Power play was a little off until it gets the winning goal at the end, so it comes through when they had to.”

The Rangers’ power play has been a vital part of their offense for much of the season, so to go 0-for-5 through two periods was unusual. But when the Lightning’s Eric Cernak caught Chris Kreider with a high stick at 17:45 of the final frame, the Rangers did not let their sixth chance pass them by.

Artemi Panarin’s cross-ice pass teed Zibanejad up in his sweet spot from the left faceoff circle to give the Rangers their first lead of the night with 16 seconds left in regulation. Mika March walked on.

“It’s one game,” Zibanejad said of the power-play struggles. “When things are not going for you, the tendency is to kind of overwork it a little bit. Try to do too much, you want it so much. That was maybe the case today and we complicated things a little bit, myself included.

“But at the end of the day, we got it done and we won the game.”

The Rangers managed to tie the game at one goal apiece at 9:25 of the second period off Jacob Trouba’s 10th goal of the season, which tied his career-high to lead all Rangers defensemen in scoring. Tampa Bay challenged for goalie interference, but the call was upheld.

Lightning winger Pat Maroon took the increasing physicality of the game a step too far when he bumped Rangers star goalie Igor Shesterkin behind the Blueshirts net. Ryan Lindgren took exception and went after Maroon, who got in some nasty uppercuts before earning an interference penalty and then a matching roughing penalty with the Rangers defenseman.

Ryan Reaves later handed Maroon the consequences at the start of the third period, playing the enforcer role he adopted when he came to the Rangers this offseason. The two dropped the gloves, and Reaves landed a few punches before exchanging some heated words with Maroon.

“I think the confidence building is now we’ve played two games that we’ve had a pretty consistent effort from our whole lineup basically,” Trouba said. “There’s no passengers and that’s I think what we feel better about, is that we’re building our game in that way. We’re playing with good teams, we’re playing well, Igor’s playing great, we’re not giving up a ton of chances — we’re giving up some — but it’s going to happen.

“Finding ways to win and that’s the most important thing.”

Halfway through a challenging weekend, the Rangers may have topped the first mighty club on the schedule. On Sunday in Raleigh, NC, they’ll go up against another squad that is an entirely different beast, the Hurricanes. The Rangers haven’t beaten Carolina this season and will play the Hurricanes two more times before the regular season is over.

The Rangers still have more to prove.