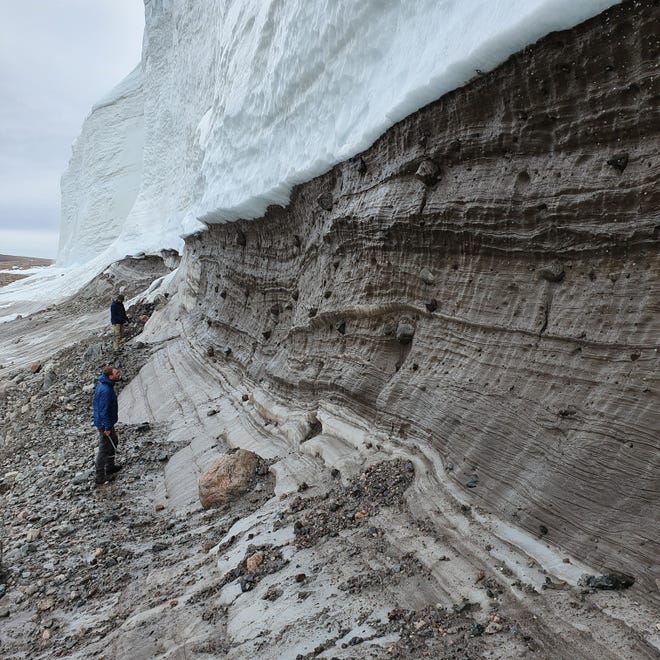 The massive 19-mile-wide Hiawatha crater underneath the northwestern ice sheet in Greenland is millions of years older than previously thought, according to new research published Wednesday in the peer-reviewed scientific journal Science Advances.

The crater, which is big enough to swallow Washington, DC, was first discovered in 2015, and presumed to have formed some 13,000 years ago. However, the new research suggests the crater was created 58 million years ago when a meteorite hit Earth.

The impact had the force of a million atomic bombs and slammed into a Greenland that was covered by temperate rainforest and not the ice and snow that blanket the world’s largest island today.

The new discovery was conducted by the Statens Naturhistorisk Museum and Globe Institute at the University of Copenhagen, as well as the Swedish Museum of Natural History in Stockholm.

An analysis of sand grains and stones from the Hiawatha crater helped scientists determine the actual age of the crater. The samples were analyzed y heating the sand grains with a laser until they release the gas argon which was used to reveal the crater’s age.

“I used a laser to release argon gas that had accumulated in the sand grain by radioactive decay from a rare isotope of potassium known as potassium-40,” said Michael Storey, one of the lead scientists on the study. “The argon gas was then measured on a very sensitive instrument known as a mass spectrometer, which allowed me to determine the age of the grain. It’s a bit like carbon dating but with this technique we can work out the age of even the oldest rocks on Earth.”

Another dating method, known as uranium lead, was used to help confirm the crater’s age. Gavin Kenny, the other leading scientist on the study, said he analyzed stones from the crater for the mineral zirconium and used it to determine the age.

Factcheck:Greenland is still losing ice; no reversal in trend

Uranium turns into lead over time, and Kenny said by understanding that process, scientists can determine when zircon crystals in the stones formed by looking at the ratio of the uranium and lead in these crystals.

Kenny said a strength of the new research was how scientists used these two dating methods to confirm the age of the crater. “That really makes us confident in what we’ve dated.”