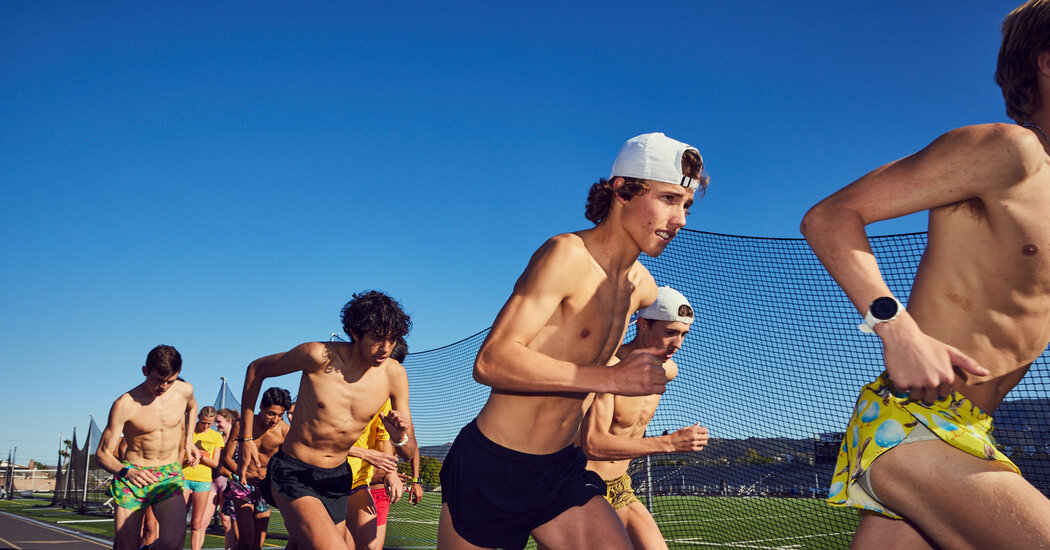 “They saw that it was possible, and I think that’s what’s happening with these guys,” Brosnan said, referring to his own athletes. “We’ve created this culture where I have three or four guys who don’t think four minutes flat is fast for the mile. One of them already broke it. And we’ll probably have more break it this year. That’s the approach you need.”

Newbury Park flexed its slow-twitch muscle fibers in the fall cross-country season. At the California state meet, the Sahlman and Young brothers swept the top four spots, while Daniel Appleford, a senior, finished seventh. One week later, Colin Sahlman led the team to a second consecutive national title by placing first overall, covering the five-kilometer course in 14:03.29, as Leo and Lex Young took second and third. All three runners broke the national high school record for a five-kilometer cross-country course, which Dathan Ritzenhein, a future Olympian, had set in 2000.

Not to be overlooked: Sam McDonnell, a senior who led the girls’ team to a runner-up result at the state meet, placed sixth at nationals.

“We don’t limit ourselves,” Leo Young said. “It’s the mentality that if you work as hard as you can, then you can trust in yourself to put everything out there.”

Last year, Brosnan said, coaches and parents from opposing schools lodged 14 complaints against him and his program with the California Interscholastic Federation, known as the CIF, which is the state’s governing body for high school sports. Brosnan rattled off some of the supposed infractions, like organizing a workout on a race day — “They were doing a cool-down run,” he said — and practicing on a Sunday, which is also against the rules. He and his wife, he said, had bumped into a couple of members of the team at a park.

“They say hello and chat for a little bit,” said Steve Hawkins, an assistant coach. “Someone was hiding behind the bathroom taking pictures of them.”

A spokesman for the CIF said the organization does not comment on accusations or complaints involving member schools.