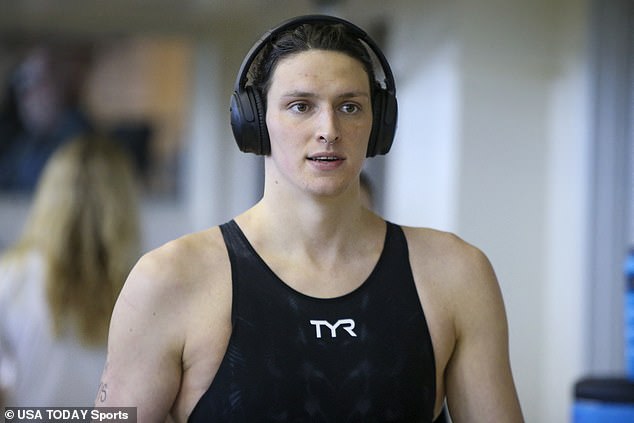 Transgender UPenn swimmer Lia Thomas finished in eighth place in the 100-yard freestyle  race at the NCAA Division I women’s championships, making for a disappointing final race of her controversial college swimming career.

Thomas, 22, swam 48.18 seconds on Saturday night, less than a second slower than her qualifying time of 47.37 seconds, which was a personal best.

As a fifth-year senior, Thomas came into the event with the 10th fastest record, which she set at the Ivy League Championships in February.

Thomas has endured months of backlash for having what critics say is an unfair advantage. The UPenn swimmer was met with cheers, boos and notable silence during the championships races.

After the race, Thomas celebrated alongside Yale swimmer Iszac Henig, who identifies as a transgender man but has not started hormone therapy, making him eligible to compete in the women’s race. Henig tied for fifth.

Both swimmers wrote ‘Let trans kids play’ on their arms during Saturday’s races.

Lia Thomas, 22, (pictured on Saturday) swam 48.18 seconds – finishing in eighth place in the 100-yard freestyle race at the NCAA Division I women’s championships, the final race of her collegiate swimming career 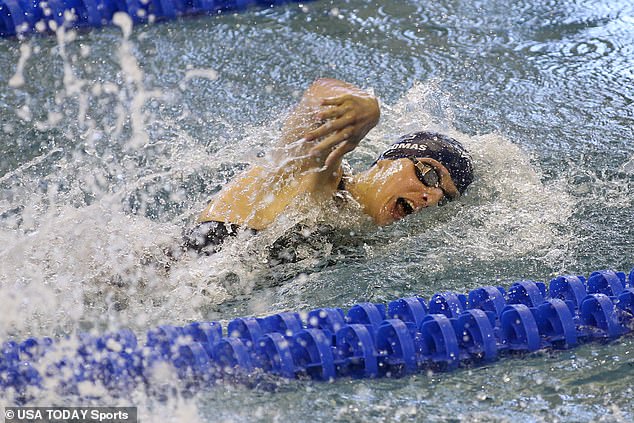 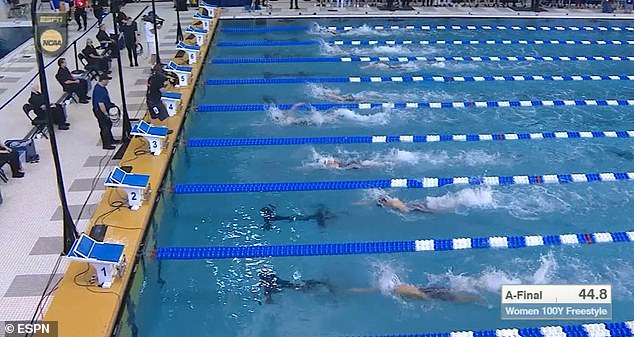 Thomas, in the sixth row, swam less than a second slower than her qualifying time of 47.37 seconds, which was a personal best she reached earlier on Saturday

Thomas’ ranks in the NCAA Championships

Hening, who said that he and Lia ‘are friends’ told ESPN that the message on the athlete’s arms was to stand in solidarity with trans athletes at all sporting levels.

‘We’re not allowed to have anything on our clothes, but the rules don’t say anything about our skin,’ he said. ‘So I took the platform I was hoping to have to say that trans athletes are just like any other athlete.’

Thomas did not speak to the media following Saturday night’s race.

Thomas has had parents and Olympian Caitlyn Jenner, 72, among other former professional athletes such as tennis great Martina Navratilova, weighing in with their thoughts about her ability to compete in the NCAA championships.

The controversial swimmer also pulled out second place in the 200m preliminary race, but only pulled fifth in the finals.

Throughout most of the season, Thomas has remained mum, rarely speaking about the mass amounts of criticism thrown her way. On Thursday, however, after winning first place, she told ESPN that she tries to ‘ignore’ the brutal commentary.

‘I try to ignore it as much as I can, I try to focus on my swimming, what I need to do to get ready for my races, and I just try to block out everything else,’ she said.

‘It means the world to be here, to be with two of my best friend and teammates and be able to compete.’

An activist also claimed Thomas was ‘not a woman’ from the poolside on Friday.

The UPenn swimmer was the first transgender athlete to win a Division I title after pulling in first in the 500-yard, but when the young swimmer stood on top of the podium, she was met with near-silence, while second-place winner University of Virginia swimmer Emma Weyant was met with wild applause and many deeming her the ‘real’ winner.

Thomas is competing within the rules, as she has completed a year of testosterone suppressants, as she starting to transition during the pandemic.

However, the rules will more than likely change come next season, where transgender females will have to undergo three years of suppressing testosterone in order to compete against biological women.

The NCAA ruled it would be wrong to implement the new rules mid-season, thus allowing Thomas to complete her final season.

Jenner slammed the NCAA for allowing the college student to compete.

Although she said she had ‘no problem’ with Thomas herself, Jenner said the 22-year-old ‘was taking it easy’ in the 500-yard race in order to not break Katie Ledecky’s record – which Thomas is nine seconds short of.

Earlier this month, Jenner also said its ‘just not fair’ to allow biological boys to compete in women’s sports. 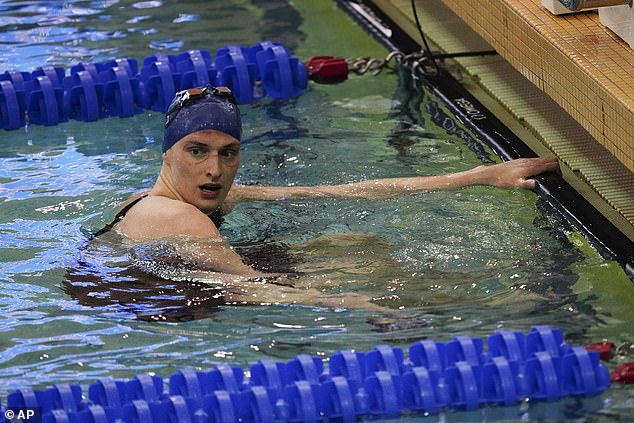 Thomas (above) has been met with harsh criticism since the start of the competition, with several high-profile people, such as transgender Olympian Caitlyn Jenner, 72 – who did not transition until 2015 – and tennis star Martina Navratilova, 65, speaking out against Thomas’ eligibility to compete against biological women. Thomas is, however, competing within the current NCAA rule, which will change after this season 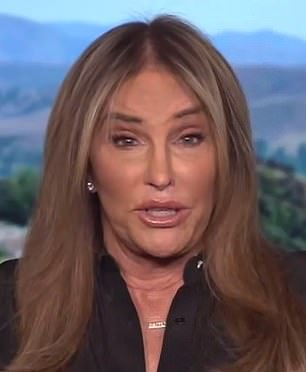 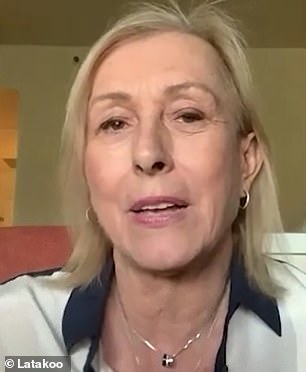 Olympian Caitlyn Jenner, 72, (left) slammed the NCAA for ‘not being tough enough’ with the rules and allowing the UPenn swimmer to compete. ‘Just being on testosterone depressants for a year or two, whatever the rules are now, they keep changing, obviously, it is not enough.’ Martina Navratilova, who is widely considered one of the greatest tennis players of all-time, spoke out against Thomas being allowed to compete as an equal against women

‘I don’t think biological boys should compete in women’s sports – we have to protect women’s sports,’ Caitlyn said. ‘That’s the bottom line.’

Pink News slammed the reality TV star, calling her ‘anti-trans’ for her rhetoric on the UPenn swimmer.

However, Jenner didn’t shy away from the controversy and responded back on Twitter, writing: ‘No, I just had the balls to stand up for women and girls in sports,’ she wrote.

Another high-profile athlete Martina Navratilova, who is considered one of the greatest tennis players of all-time, spoke out amid Thomas’s historic victory on Thursday. She suggested transgender women who are competing against biological women should have an asterisk next to their wins.

‘It’s not about excluding transgender women from winning ever,’ the 65-year-old said. ‘But it is about not allowing them to win when they were not anywhere near winning as men.’

‘You try to keep it as close as possible to what it would had been, were you born in the female biological body in the first place,’ she said.

‘And even saying that, people take exception to – biological female. People don’t even want to use those words.

‘I don’t know what else to say. Other than that.’

On Friday, a British campaigner Kellie-Jay Keen, who lobbies against ‘woke’ policies on transgender people, went viral after a row in the stands during Thomas’ swimming competition, where she told a woke spectator that the 22-year-ld is ‘not a woman.’

Keen, who was in the stands, can be heard telling a male spectator: ‘Is he the same as the other girls in the pool?’

A clash of views as Lis Thomas races ahead at the NCAA 500 freestyle prelims. pic.twitter.com/X9J5yzmozd 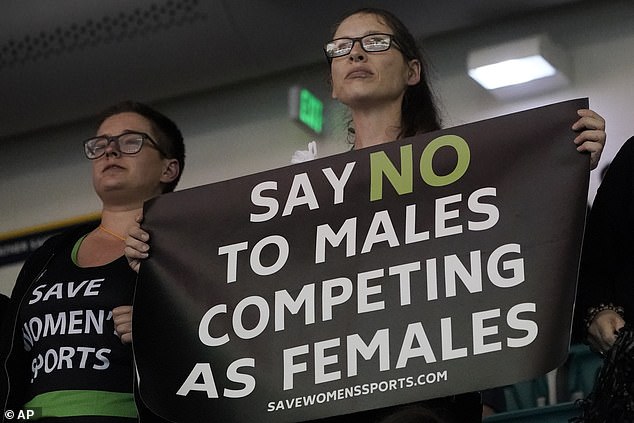 Signs and rowdy spectators have been seen at the competition demoting Thomas’ wins and podium placements. A woman was seen holding a ‘say no to males competing as females’ sign at the competition on Friday. Also on Friday, British activist Kellie-Jay Keen got in a row with another spectator and said Thomas was ‘not a woman’

The man replies: ‘Every body is different.’

The man counters: ‘Let me ask you, are you a biologist?’

Keen replied: ‘Oh my God – don’t be ridiculous. I’m not a vet, but I know what a dog is. You rely on stupid arguments, because you don’t have an argument.’

Parents have long spoken out about their disagreement with Thomas competing at all, as the swimmer competed as a male for the first three years of collegiate swimming.

The swimmer, who went by Will before transition, was ranked in the low 400s in men’s swimming, but had skyrocketed to first in women’s.

Lia Thomas started taking hormone therapy while she was still competing as a male back in May 2019.

Under USA Swimming rules, athletes had to have recorded low levels of testosterone for 36 months to compete in the female category.

That meant that Thomas didn’t qualify for the NCAA championship, if they followed USA Swimming rules – as they originally said they would.

But the NCAA said that she would be allowed to compete because they were refusing to adopt the threshold this year.

Last month, the NCAA committee said: ‘The subcommittee decided implementing additional changes at this time could have unfair and potentially detrimental impacts on schools and student-athletes intending to compete in 2022 NCAA women’s swimming championships.’

It is unclear what they will do next year, however.