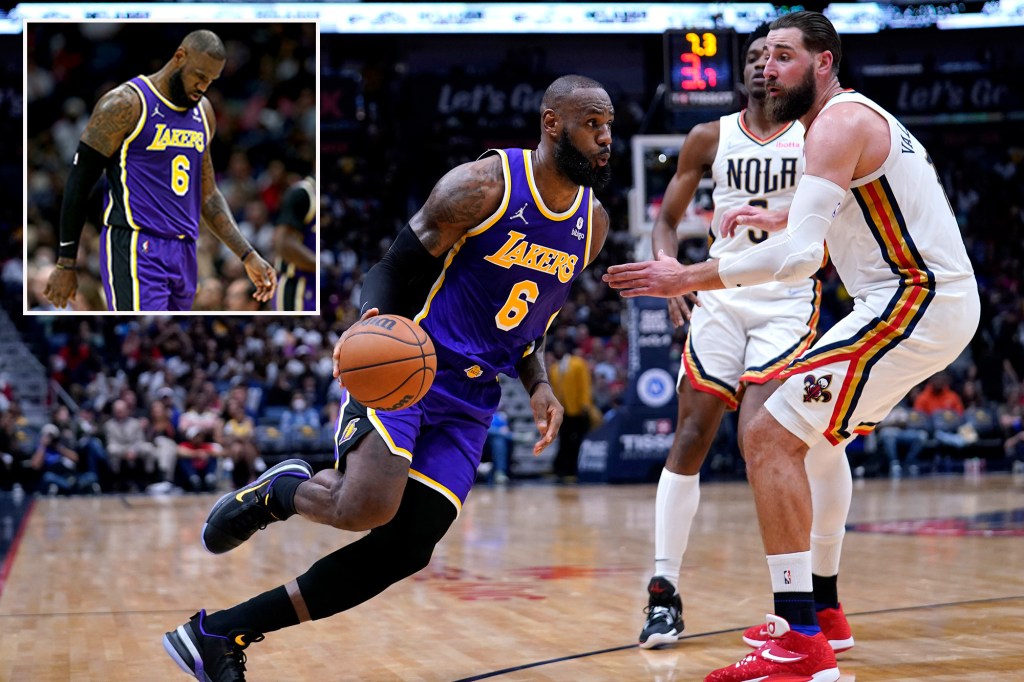 With just eight games left in the regular season, the 31-43 Lakers are sitting in the tenth spot in the Western Conference with one of the toughest remaining schedules in the league and a one-game lead over the Spurs to simply qualify for the play -in tournament. The loss dropped the Lakers behind the Pelicans in the standings and gave New Orleans the potentially crucial tie-breaker.

James said his left ankle felt “horrible” after he turned it in the first half of Sunday’s loss to New Orleans.

“I mean, I have no idea how I finished the game, to be honest, after watching that replay. It’s pretty nasty,” James said after finishing with 39 points, nine rebounds and five assists.

James’ left ankle was wrapped after the game, and he was walking with a limp. The Lakers’ leading scorer is questionable for Tuesday’s game in Dallas.

“S–t I hope not, because I hate missing games. That’s not in my nature,” James said, adding that he had already started treatment on the ankle before leaving the arena Sunday. He will receive “around the clock” treatment.

“It’s awful right now. And unfortunately, we’re about to hop on a flight, too. See what happens day-to-day. But it’s pretty sore right now.”

James came down on his left ankle awkwardly when he stepped on Pelicans center Jaxson Hayes’ sneaker with 10:09 remaining in the second quarter while the Lakers were up 36-29. He remained in the game, but said he “lost all explosiveness” after the injury.

“I was going in for an offensive rebound and me and Jaxson basically stepped at the same time,” James said. “He got his foot on the ground before I could get my foot back on the hardwood. I stepped on his foot and rolled my ankle.”

James said he would have “probably not” finished the game, if the Lakers weren’t in such a crucial stretch with a play-in round spot on the line.

“I mean, from the time I turned my ankle I felt a sharp pain run up my leg. It started getting hot. And I’ve been there before with ankle sprains before,” he said. “But I didn’t want to come out of the game because I understood [the importance]. I mean, I just wanted to win the game. I understood how big of a game it was for us.”

“It’s just been that kind of season. He was just in an incredible groove right around then, and credit him for toughing it out. But you can see he was limited on it somewhat the rest of the way. But he battled through it.”

The Lakers will need a healthy James to compete for a spot in the play-in tournament, which begins April 12 and concludes April 15.

Although he’s “pretty banged with” with the ankle injury, James said, “I still feel like if I’m on the floor and I can make things happen then we still got a pretty good chance to make something out of this season.”

James’ injury adds to the Lakers’ season-long struggles. He returned to the lineup earlier this month after being sidelines with a nagging knee injury throughout February.

The Lakers have also been without its star center in Antony Davis, who’s been sidelined since Feb. 16 with a foot injury.