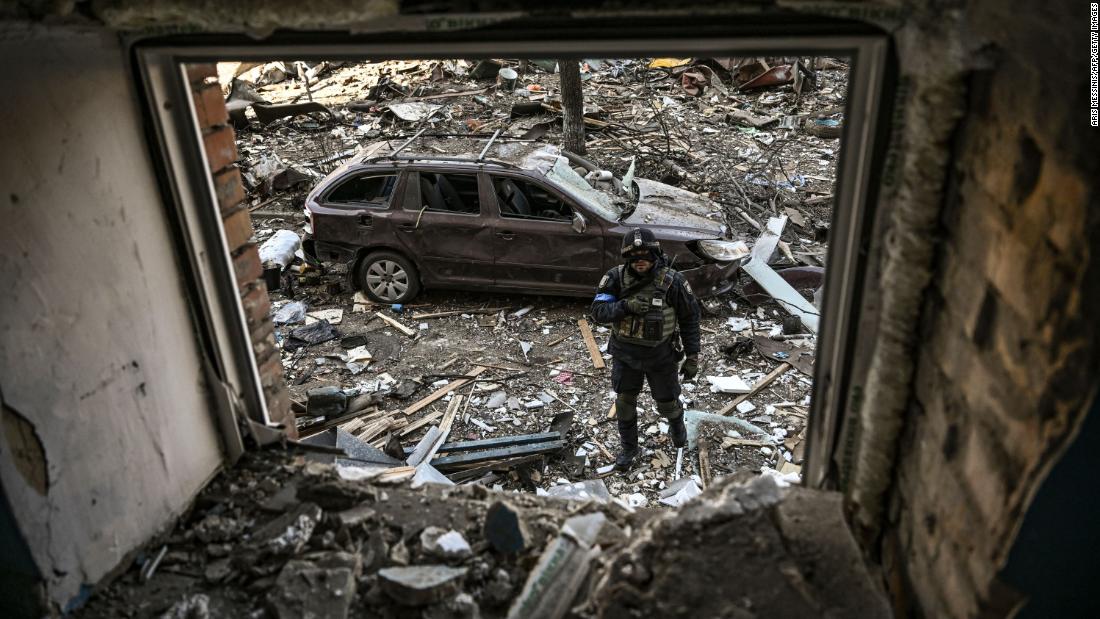 A new satellite image shows the bombed theater in Mariupol completely destroyed, as the City Council said trapped residents are being taken to Russia against their will. Meanwhile dozens of Ukrainian troops have reportedly died in a strike on a military barracks in Mykolaiv.

Here are the latest developments:

Russia hasn’t gained air superiority: Britain’s military said Russian forces have still not managed to gain control over Ukraine’s airspace. An intelligence assessment provided by the UK’s Ministry of Defense said Russia has failed to gain air superiority over Ukraine and is largely depending on stand-off weapons, “launched from the relative safety of Russian airspace to strike targets within Ukraine.”

Mariupol residents forced to go to Russia: Residents of besieged Mariupol are being taken to Russian territory against their will by Russian forces, according to the Mariupol City Council. Captured residents were taken to camps where Russian forces checked their phones and documents, the city council said. They were then redirected to remote Russian cities. The besieged city of Mariupol is under almost constant bombardment, according to a major in Ukraine’s army, and residents are rationing food and water as bodies are left in the streets. Ukrainian President Volodymyr Zelensky said what Russian forces have done to Mariupol is an “act of terror that will be remembered for centuries.”

Ukrainian troops killed in missile strike: Rescue efforts are ongoing in the southern city of Mykolaiv at the scene of a missile strike on barracks housing soldiers, regional official Vitalli Kim said. Dozens of troops are reported to have been killed in the attack by Russian forces, according to journalists from CNN Swedish affiliate Expressen who were at the scene.

Russian bombardment of civilians continues: Two children and a women were killed in the eastern town of Rubizhne after being pulled from the rubble of a residential building pummeled by Russian artillery fire, the emergency services said. In Kyiv, a mother covered her one-month-old baby with her body while their home was being shelled, according to the National Children’s Specialized Hospital Ohmatdit. The child was unharmed, but the mother suffered multiple injuries, the hospital said. US Secretary of Defense Lloyd Austin said Russia continues to make “incremental gains” in Ukraine’s south and has used “brutal, savage techniques” in the way it has targeted civilians.

More than 6,600 people evacuated via evacuation corridors: At least 6,623 people were rescued via evacuation corridors from besieged Ukrainian cities Saturday, according to Kyrylo Tymoshenko, a senior official in President Volodymyr Zelensky’s office. Tymoshenko said 4,128 people, including 1,172 children, were evacuated from Mariupol to Zaporizhzhia. Zelensky said eight evacuation corridors were operating Saturday but due to Russian shelling, authorities were unable to evacuate people from Borodyanka in the Kyiv region. Authorities were also unable to deliver humanitarian aid to the cities in the southern Kherson region.

Zelensky singles out Nestle: Zelensky addressed the Swiss people via video link, calling for Switzerland to take further action against Russia. He singled out Swiss company Nestle, which unlike many other major brands, has not left the Russian market. “Your company that refuses to leave Russia. Even now — when there are threats from Russia to other European countries. Not only to us. When there is even nuclear blackmail from Russia,” he said.