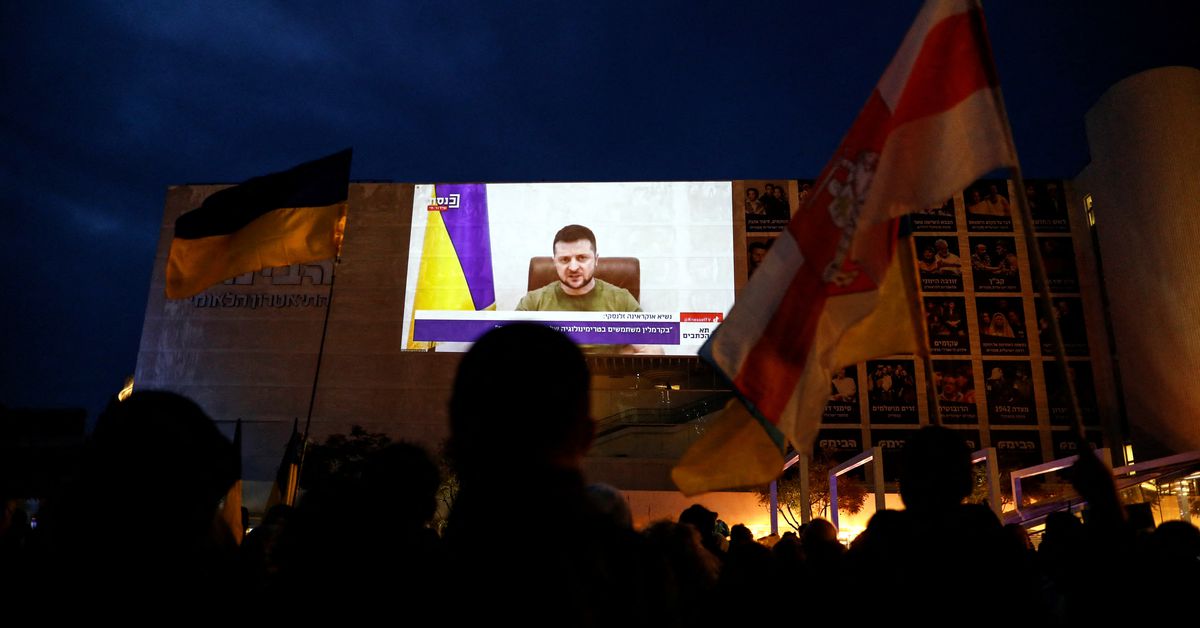 LVIV, Ukraine, March 20 (Reuters) – Ukrainian President Volodymyr Zelenskiy chided Israel in an address to its parliament on Sunday, asking why it was not providing missile defenses to his country or sanctioning Russia over its invasion.

Replying to Zelenskiy, Israeli Foreign Minister Yair Lapid was non-committal, saying in a statement that Israel, which has sent a field hospital and other humanitarian aid to Ukraine, would continue to assist its people “as much as we can”.

A mediator in the Ukraine-Russia crisis, Israel has condemned the Russian invasion. But it has been wary of straining relations with Moscow, a powerbroker in neighboring Syria where Israeli forces frequently attack pro-Iranian militia.

“Everybody knows that your missile defense systems are the best … and that you can definitely help our people, save the lives of Ukrainians, of Ukrainian Jews,” Zelenskiy, who is Jewish himself, told the Knesset in a video call.

“We can ask why we can’t receive weapons from you, why Israel has not imposed powerful sanctions on Russia or is not putting pressure on Russian business,” he said in the address, one of several he has made to foreign legislatures.

“Either way, the choice is yours to make, brothers and sisters, and you must then live with your answer, the people of Israel,” Zelenskiy said.

Israeli Prime Minister Naftali Bennett, who held talks with Russian President Vladimir Putin two weeks ago in Moscow and has spoken frequently with him and Zelenskiy, since then, was among the more than 100 of the parliament’s 120 members who took part in the video call.

He made no immediate comment after the Ukrainian leader spoke.

In his address, Zelenskiy drew a comparison between the Russian offensive and Nazi Germany’s plan to exterminate European Jewry during World War Two.

“Listen to what is being said now in Moscow, listen to how they are saying those words again: the final solution. But this time in relation to us, to the Ukrainian question,” he said.

Zelenskiy cited no evidence in making that allegation or identify who might have used the term. Putin has used an expression which means “final decision/final resolution” once in the past 30 days, according to Reuters monitoring of his remarks, but not in a context that carried the same resonance or meaning as the Nazi terminology.

Zelenskiy’s reference drew condemnation from Yad Vashem, Israel’s memorial in Jerusalem to the six million Jews killed by Nazi Germany in World War Two. He said such “irresponsible statements” trivialized the historical facts of the Holocaust.