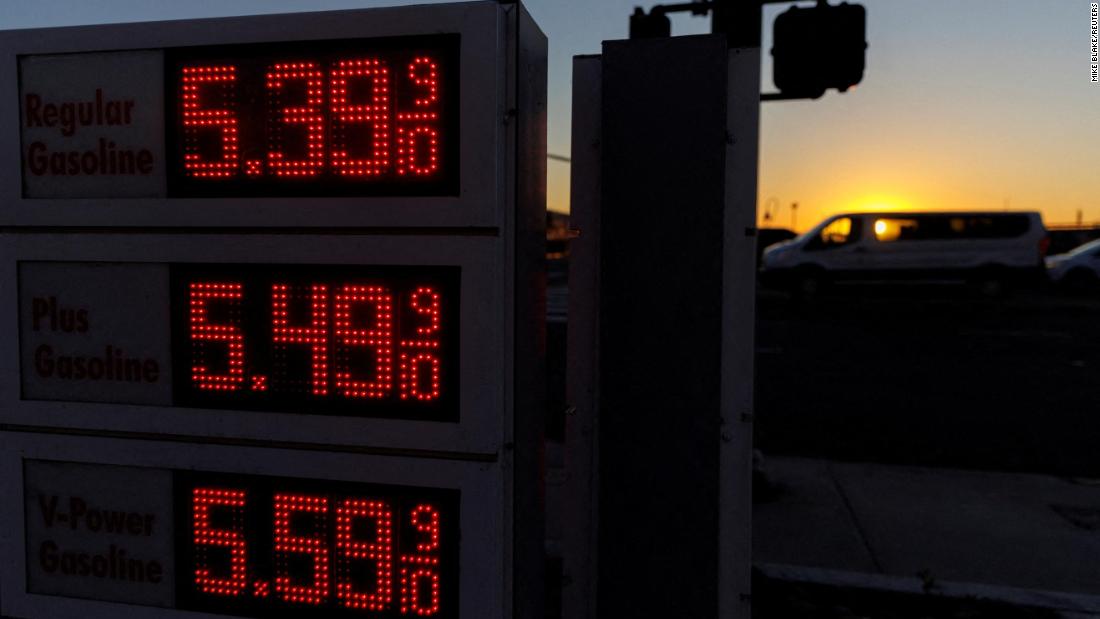 The two main targets of the effort, Saudi Arabia and the United Arab Emirates, have had frosty relations with the US since Biden took office. Both countries are members of OPEC, the powerful bloc of 13 countries that together control 40% of global oil production. And both were on friendly terms with the Trump administration.

But over the past month, US officials say progress has been made and there may be evidence the diplomatic work is starting to pay off.

Inside the White House, the comments ricocheted around the West Wing, and fed a sense that things were moving in the right direction, officials said.

Biden officials held diplomatic talks in oil-rich Venezuela this month, though the administration has since downplayed the notion of any production increases from the heavily sanctioned country. The potential for a looming nuclear deal with Iran could eventually unleash a wave of sanctioned Iranian oil back onto the market, but it’s not viewed as a near term solution inside the White House.

The reality is that the bulk of spare oil capacity being eyed by US energy officials comes from the Middle East. In particular, officials and market participants hold the view that the fastest way to get the most oil onto the market is through increases to Saudi Arabia’s production.

For that to happen, US officials are aware they have to address what has been a severely strained relationship between President Joe Biden and Saudi Arabia’s Crown Prince Mohammed bin Salman, the de facto leader of the kingdom who is colloquially known as MBS. Since the early days of the Biden administration, the Saudis have felt personally slighted by what they say has been the President’s decision to calibrate the entire relationship around the 2018 murder of Washington Post journalist Jamal Khashoggi.

“It is hard to get to a better place without dealing with MBS,” explained a US official familiar with the matter. “There is no other way to do it.”

When US officials finally broached the possibility of a call between Biden and MBS in late January, Saudi officials instead proposed putting Biden on the phone with his 86-year-old father, King Salman, the official leader of the kingdom — and the individual Biden had identified early in his first year as his direct counterpart.

It would be their first conversation in 12 months.

Yet officials involved in the matter point to what has transpired since as a window into a relationship that, while still complex, has shown signs of stabilizing at a critical moment.

MBS, who had been scheduled to travel to Beijing for the opening ceremonies of the winter Olympics at the time of the call, canceled his trip for “scheduling reasons,” according to the Chinese Foreign Ministry. The real reason, two sources from the region briefed on the matter told CNN, was at least in part so that MBS could be in attendance for the call between his father and Biden.

While it’s unclear whether he was in the room, MBS did listen to the call, but did not speak, the sources said.

The Embassy of Saudi Arabia in Washington did not immediately respond to a request for comment.

The February 9 call included a discussion about ensuring the stability of global oil supplies, one US official said, and set in motion a trip to Saudi Arabia by two senior Biden officials.

Three days later, Brett McGurk and Amos Hochstein, Biden’s top national security and energy emissaries for the region, were in the Saudi capital of Riyadh for an hours-long, face-to-face meeting with MBS and an entourage of top Saudi officials, including MBS’s brother, Prince Abdul Aziz bin Salman, the kingdom’s energy minister.

“That was set up by the call,” a senior administration official said of the trip to Riyadh. “It wasn’t decided in advance.”

There was no explicit request for increased supply in that meeting, officials said. But with Russia just weeks away from what the Biden administration had concluded would be a widespread invasion of Ukraine, the volatile dynamics of a marketplace in crisis were a central focus of the discussion.

In the days that followed, White House officials publicly declined to provide any specific detail of the meetings and took pains not to characterize what, if any, progress had been made.

But behind the scenes, the groundwork had been laid for a process that has continued for weeks.

Since the meeting in Riyadh, the official said the administration and the Saudis have had “a really productive set of engagements following up on that discussion on an affirmative, positive agenda that reflects the critically important range of issues we are engaged in.” That includes energy, regional security and international development issues, the official said.

The Saudis appeared to shine a spotlight on the working relationship between the US and Saudi Arabia on Thursday, revealing publicly that a joint Saudi-US operation earlier this year was able to get two American girls out of Yemen safely, according to a source familiar with the matter.

Still, other US officials acknowledge that the relationship is not close to being as sturdy as it once was, and that it will require more acute high-level attention from the Biden administration.

When Russia launched its invasion on February 24, the US and a coalition of more than 30 countries responded with sweeping sanctions targeting the country’s economy.

While energy sanctions were deliberately left off the table in an effort to shield Western allies, particularly in the European Union, from destabilizing price shocks, the punishing sanctions roiled a market where Russia sits as the world’s second largest exporter.

Russian producers, in the wake of the sanctions, have had difficulty closing new orders for oil, as market participants pull back, wary of the full scope and reach of the sanctions targeting the country’s central bank and its largest financial institutions.

The effect goes beyond the Russian economy, however. Russia is a member of the OPEC+, which sits as the most critical player in market supply. Russian President Vladimir Putin has spoken by phone to MBS and UAE’s Sheikh Mohammed bin Zayed al Nahyan.

Russia has signaled it would not be in favor of a production hike, which would largely come at its expense.

OPEC+ members chose to stick to the agreed upon supply schedule when they met on March 2, a decision that came as no surprise to US officials at the time.

Yet the economic fallout since then has led to a tangible supply disruption. As global energy companies have shunned Russia, even though its oil production has held up, much of those Russian barrels have failed to make it to market. It’s a critical though subtle distinction that OPEC members could point to in any future decision to raise production targets.

Earlier this week, the US moved on its own to ban Russian oil imports into the US, a small slice of Russian overall exports, but another action that brought a chill to the marketplace and helped drive prices higher.

It’s a painful reality that has brought into sharp focus months of quiet, but urgent outreach by US officials to secure increased energy production from industry and countries across the globe.

Led by Hochstein, the State Department’s energy envoy, and McGurk, it included outreach across the Middle East, Asia and North Africa, as well as intensive discussions with US producers.

As the price increases have continued to bite, the quiet nature of those efforts has given way to a direct public message.

“We want more oil supply in the world,” Daleep Singh, Biden’s deputy national security advisor for international economics and one of the officials running point on US response, said on CNN’s New Day on March 9. “We want it from producers with spare capacity.” Singh explicitly noted that Saudi is one of those producers.

The UAE is another of those producers with spare oil capacity. But it’s also a traditional Gulf ally that has had an increasingly strained relationship with the US since Biden took office.

The country felt particularly slighted by the US when there was not an overwhelming amount of support of them after the deadly drone attack in the UAE in January carried out by Iranian-backed Houthis, a US official explained.

They also are concerned about a possible revived Iran nuclear deal being too weak, and thus enabling the IRGC.

When Biden deployed his senior aides to Saudi Arabia, McGurk included a stop in the UAE, where there was a particular focus on Yemen that included an effort to stress US support for the country’s territorial defense against Iranian-enabled missile and UAV attacks, officials said .

As he did with the Saudis, McGurk discussed “the need to combine pressure on the Houthis in Yemen with a concerted UN-led effort to end the war there,” the White House said in a readout of the trip.

Signs of tension have been clear in the wake of Russia’s invasion.

The UAE abstained from a US-led resolution to condemn Russia’s invasion of Ukraine at the UN Security Council, largely due to the frustration over Yemen, officials said.

“Today, we’re going through a stress test but I am confident that we will get out of it and get to a better place,” he added.

Yet it was Otaiba’s comments on Wednesday that first sent markets plummeting and proving some possible evidence that the Biden administration’s diplomatic efforts were starting to pay off.

But even with the UAE signaling they would support increased production, the country has also made it clear that they will have to abide by the OPEC rules, which requires all countries to support any move to increase supply.

The UAE’s energy minister, just hours after Otaiba’s comments, appeared to walk it back– but he never outright contradicted what Otaiba had said.

Instead, he made clear the UAE support for operating within OPEC guidelines.

“The UAE is committed to the Opec+ agreement and its existing monthly production adjustment mechanism,” Suhail Al Mazrouei said on Twitter in what appeared to be an effort to reassure fellow members.

The next OPEC+ meeting is scheduled for March 31.