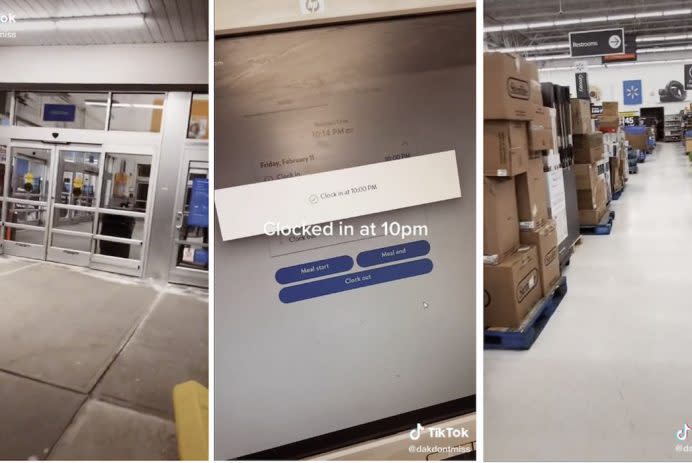 A TikToker is sharing the most interesting details of his job as an overnight store at Walmart.

The employee, an 18-year-old who posts under the name @dakdontmiss, began his now-viral video series in mid-February. The clips, which have drawn hundreds of thousands of views, show what it’s like to work through the night at Walmart, restocking shelves in an empty store.

4 mortgage truths that may surprise you

It’s just the latest entry in an ongoing trend on the app. For months, TikTokers have been giving insights into their interesting jobs — including what it’s like to navigate a container ship, how much NFL waterboys make and what Google employees get to eat for breakfast.

The videos from @dakdontmiss are fairly straightforward, but they’ve transfixed countless viewers. First, the teenager begins his shifts at 10 p.m.

Then, @dakdontmiss walks through the near-empty store and begins loading shelves. In his first clip, he starts with a series of refrigerated grocery items.

After hours of restocking, @dakdontmiss goes to his car at 2 am for a “lunch break.” He then proceeds to restock everything from batteries to windshield wiper blades before finally getting home at 7:20 am, just as the sun is rising.

The TikToker’s following videos contain more specific details about the job — such as how he prints labels for new products and how he unloads larger items.

While the videos are in no way overly revealing, many TikTokers found the clips to be fascinating. Many thought @dakdontmiss’s job seemed soothing.

Guys, here’s how to pick the perfect first date outfit:

“My OCD would love this,” one user wrote.

“It seems so peaceful at night,” another added.

“I would love this job,” another agreed.

Others were concerned about the hours.

“How is your sleep schedule?” one user asked. “I’d be so down for a job like this, but I feel like it would mess me up.”

As @dakdontmiss explained in the comments, the sleep schedule just takes some getting used to. He told one commenter that he usually sleeps from 8 am until the early afternoon. In another comment, he added that he makes $17.50 per hour.

Comedian LaLa lives out her high school fantasy and splurges on vintage Chanel and Louis Vuitton:

The post TikToker reveals what it’s like to work as an overnight store at Walmart appeared first on In The Know.

More from In The Know:

Spring just started, but lots of stylish sandals are already on sale at Nordstrom

6 seriously stylish sandals under $40 you’d never guess are from Walmart (but they are!)

The perfect spring dress is on sale for super cheap at Nordstrom Rack, and it looks good on literally everyone