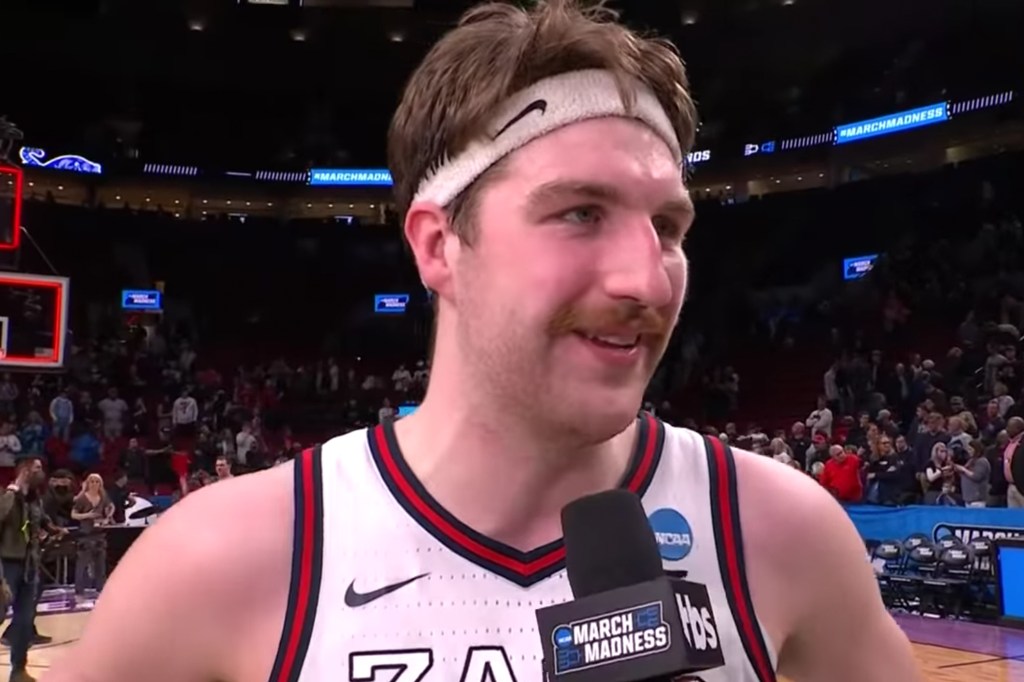 Gonzaga star Drew Timme carried the Bulldogs into the Sweet 16 after Saturday night’s win, using some foul language at halftime — and after the game.

Timme scored 21 of his 25 points in the second half of No. 1 seed Gonzaga’s 82-78 win over ninth-seeded Memphis in the second round of the NCAA Tournament on Saturday night in Portland, Ore.

But it was the motivation Timme provided at halftime that also helped Gonzaga, who were trailing by 10 points at the break, avoid a rough upset loss.

At halftime, the 6-foot-10 junior forward gathered his Gonzaga teammates at midcourt, pointed at the scoreboard showing a 10-point halftime deficit for the top overall seed and expressed a few choice words.

A pumped-up Timme at first gave a censored version of what he said to his teammates at the half.

“I don’t give a flying ‘F’ what happens,” Timme told a TBS on-court reporter after the game, referring to his halftime pep talk. “What happens at the end of the game, whether we lose or win. We’re not going out as no soft guys. Leave it all on the floor. [Because] it could be your last 20.

“Hey, man if you go all out and we still lose … play with no regrets. We took that to heart and came out with the win, fortunately. Give credit to Memphis, they really brought it and the way they turned their season around, it’s pretty remarkable.”

The 21-year-old, however, couldn’t censor himself throughout the entire interview.

Timme, who was also being interviewed with teammate Andrew Nembhard, repeated an expletive a couple of times while be asked about the performance of Nembhard, who chipped in with 23 points and some clutch late free throws.

“They were talking all crap on him, and you know what, that’s what we expect from him. He brought us home. He got us the s–t, man. Good s–t, boy.”

Nembhard appreciated the compliment and didn’t mind the expletives, saying, “Man, I love this guy.”