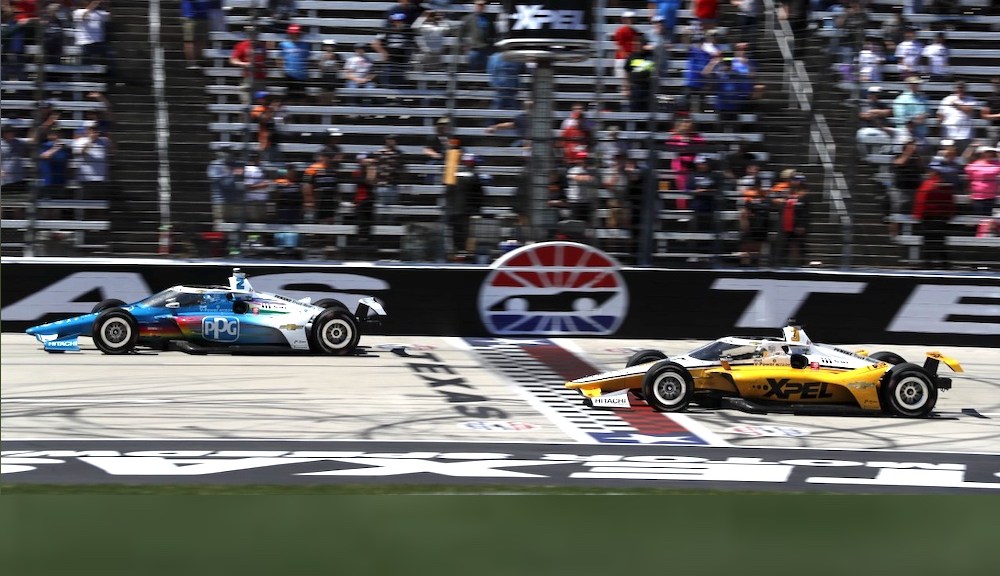 Great racing returned to Texas Motor Speedway on Sunday as frequent passing and a thrilling slingshot finish as Team Penske’s Josef Newgarden denied teammate Scott McLaughlin’s first oval win at the finish line. After 248 lapses of attrition-filled action, Newgarden edged McLaughlin to take the victory by 0.0669s; Newgarden was credited with leading three lapses to the 186 McLaughlin controlled on behalf of Penske and the Chevrolet.

“It was a race of patience, for sure,” Newgarden said after scoring his 21st IndyCar win. “We had a lot of adversities to work through; We had a right-front tire that was coming apart on the first stint. The final restart I got my doors blown off by everybody. I must have gone back to sixth or seventh. At the very end I literally conceded like two laps to go like, ‘Man, it’s just not gonna happen.’ I was like, ‘It’s done.’ You know, he did a good job. He was in position, he’s gonna win this race, and you just bring it home.”

Newgarden’s approach changed when used traffic ahead of McLaughlin to run him down and win the drag race to the checkered flag.

“The traffic just presented a great opportunity to get after it and try and do something to win this race,” Newgarden added. “So I went to the high side and I said, ‘You know what, if I hit the fence, hit the fence. Scott would still win and it would be a great day for the team. If I don’t hit the fence, then I don’t know what’s gonna happen.’ And you guys saw I was so pumped. I’ve never been so excited.”

Chip Ganassi Racing’s Marcus Ericsson—in yet another strong performance—led his organization home in third as the top seven was filled with Penske and Ganassi drivers. Penske’s Will Power was fourth, Scott Dixon was a late mover to fifth ahead of teammates Jimmie Johnson in sixth and Alex Palou in seventh.

After Johnson’s starring performance in the No. 48 Honda, the most remarkable drive of the day belonged to Rahal Letterman Lanigan Racing’s Santino Ferrucci who went from being a pit lane bystander on Saturday to filling in for Jack Harvey on Sunday, racing from last to ninth in the No. 45 Honda.

The race wasn’t perfect, but it was a vast improvement over recent Texas runs where drivers were all but pinned to the bottom lane due to the application of NASCAR’s PJ1 traction compound on the upper lanes. With an increase in downforce allowed by the series and revised tires from Firestone, more aggressive passing attempts – entering Turn 1, exiting Turn 2 and Turn 4 – became possible.

Not all of the passing attempts were successful. Some drivers made contact with others, while solo incidents and mechanical and engine issues took nine drivers out of the race.

Newgarden reckoned it was the greatest win of his career. McLaughlin reckoned he should have held firm to conceding defeat. Chevy led more than 200 laps and finished 1-2-4 to stretch its Manufacturers’ championship lead over Honda. In just over two weeks we’ll reconvene to see if the Penske-Chevy train can be stopped on Honda’s home turf or if the Penske trio will continue to own the early part of the season.

Ferrucci to replace Harvey in Texas

The 248-lap race got underway with Felix Rosenqvist leading from pole but Scott McLaughlin took P1 at the end of the first lap. Alexander Rossi appeared to get an early run coming to the green flag as he passed a number of cars on the outside.

Colton Herta was on the move early, up to P6 from P9 in the first few lapses. Rossi was penalized for jumping the start but before he could serve the penalty he slowed to a crawl with suspected alternator problems. First bail came on Lap 13; restart on Lap 16; Kyle Kirkwood, Graham Rahal, Dalton Kellett and Santino Ferrucci pitted.

Pato O’Ward went on a charge, using portions of the second lane to execute passes; he went to P8 after dropping back early. By Lap 28, Kirkwood charged to P10 as McLaughlin held a 0.28s lead over Rosenqvist. After the Swede it was Takuma Sato 0.87s back, then Herta 1.3s behind and Will Power 2.0s in arrears.

Graham Rahal almost met the Turn 4 wall on Lap 53 as he came across a sliding Rinus VeeKay. The late-stint tire life worries started to arise shortly. VeeKay pitted the next lap, which brought a three-stop race into question. Marcus Ericsson was in on Lap 57 and was joined by Josef Newgarden and leader McLaughlin moments later. Rosenqvist was next on Lap 59. A long stop for Christian Lundgaard on Lap 61 as fuel took a while to transfer while Sato held the lead with Herta and Power behind. Sato pitted at the end of Lap 61.

Sato was blocked getting to his pit box as Malukas went long in his; With the pit exchanges, Kirkwood took the lead. Pit lane speed penalty for Conor Daly.

Kirkwood pits from the lead on Lap 67.

With the pit stops done, McLaughlin, Newgarden, O’Ward, Rosenqvist, Herta, and Dixon were the top six. McLaughlin was a full 12.4s clear of teammate Newgarden in P2 by Lap 79.

Trying to get through fast traffic halved McLaughlin’s lead by Lap 95 as Newgarden ran 6.4s behind. Lap 99 brought the second caution as Devlin DeFrancesco slid up in Turn 1 and made right-rear-to-left-front contact with Sato who went up the track and lightly hit the Turn 2 wall before making his way to the pits.

Lap 104 saw the field stop and both O’Ward and Rosenqvist had major issues in the pits. O’Ward slide into his box and hit his left-front tire change. The crew had to roll the car back and then perform service. Rosenqvist also slid long into his box, had to be pulled back, and then his right-rear tire changer needed a second attempt to get the wheel to tighten, adding more time to the process. Romain Grosjean pitted with smoke trailing from his Andretti Honda and climbed from the car.

Rosenqvist and O’Ward fell out of the top six and rejoined in P16 and P17. Leading the field at this point: McLaughlin, Newgarden, Power, Dixon, Ericsson and VeeKay. The restart came on Lap 114 for only one lap when Kirkwood spun after getting up onto the PJ1 compound and crashing in Turn 4. He appeared to be unhurt.

O’Ward was penalized for striking his crew member—Norm Hornitschek—and pitted under the caution to replace his front wing. He lost a lap in the exchange and restarted P21.

The Lap 129 restart saw DeFrancesco, Castroneves and Rahal in the wall in Turns 3 and 4. Castroneves was an innocent bystander as DeFrancesco dipped below the white line and came up into Rahal who then hit Castroneves. All drivers were seen and released from the care center.

Lap 140 brought an end to Rosenqvist’s day with a mechanical issue on the right-rear corner.

The Lap 150 restart was a Penske 1-2-3 with McLaughlin leading Newgarden and Power and Newgarden passing at the end of the lap. VeeKay’s was on a charge up to P2 on Lap 153 as McLaughlin retook the lead. Newgarden slipped to P4 after Dixon got by. Ericsson was next to demote him to P6.

McLaughlin moved to P2 and Newgarden to P5. Ericsson took over the lead on Lap 185 as tires started to become an issue for most of the remaining runners. VeeKay was first to pit among the leaders on Lap 187. Herta pitted at the end of the lap. He lost a ton of time—14.5 seconds for the total stop as the left-front wheel nut refused to torque. He lost a lap as a result of the problem.

McLaughlin pitted on Lap 192. Newgarden and Power followed at the end of the lap. Ericsson was in on Lap 184.

Lundgaard clipped the wall on Lap 232, damaging his right-front wing. McLaughlin, Newgarden and Ericsson fought for the top three with McLaughlin edging 0.6s clear. Herta in P11 was told he needed to save fuel and VeeKay cannot make it to the end on his tank.

When it looked like McLaughlin was safe Newgarden pulled off a shocker and lost his mind in the car celebrating.
RESULTS