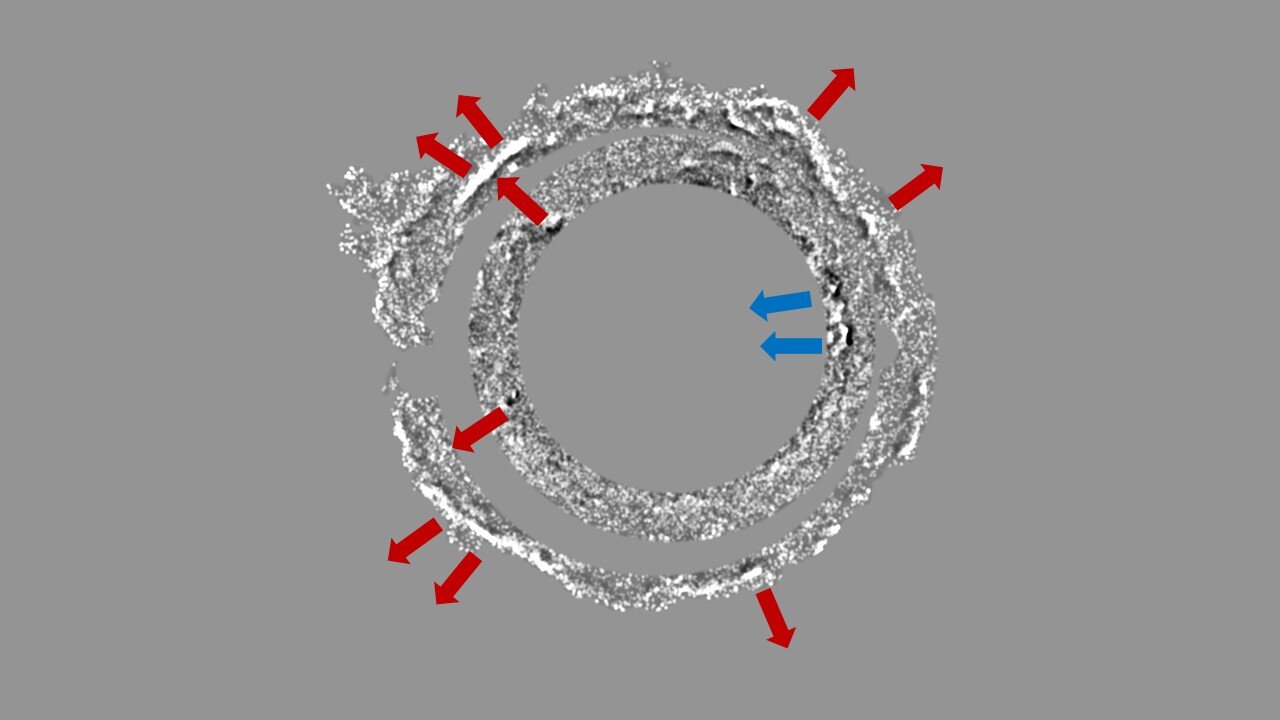 The inner nebula of the much-studied supernova Cassiopeia A is not moving smoothly outward. This has been discovered by astronomers from the University of Amsterdam and Harvard. The astronomers suspect that the remains have collided with something. Their findings have been accepted for publication in The Astrophysical Journal.

Cassiopeia A is the remnant of an exploded star in the Cassiopeia constellation, about 11,000 light years away from us. Light from the explosion should have reached Earth for the first time around 1670. However, there was too much gas and dust around the star for the explosion to be seen with the naked eye or with the then very basic telescopes. The Cassiopeia A exploding nebula is expanding at an average rate of 4,000 to 6,000 kilometers per second and has a temperature of about 30 million degrees Celsius. The expansion is most likely occurring in gas that was blown out by the star long before the explosion. Cassiopeia A is now about 16 light years across.

The researchers, led by Jacco Vink (University of Amsterdam, the Netherlands) analyzed 19 years of data from the Chandra X-ray Observatory. This is an American X-ray satellite with Dutch spectrometers that orbits the Earth in a high elliptical orbit.

The scientists observed that on the western side of Cassiopeia A, the inner regions of the explosion nebula are not expanding, but moving inwards. The researchers also took measurements of the acceleration or deceleration of the outer shock wave. This outer shock wave turned out to accelerate in the west instead of decelerating as was expected.

“The backward movement in the west can mean two things,” says Jacco Vink. “Either there is a hole somewhere, a kind of vacuum, in the supernova material, causing the hot shell to suddenly move inwards locally. Or the nebula has collided with something.” From the models of Vink and his colleagues, a collision appears most likely. The computer models predict that after a collision, the shock first decreases in speed but then accelerates. “Exactly as we have measured,” says Vink.

The collision scenario was also investigated recently by an Italian group with whom Vink collaborates. They suspect that the shock wave collided with a shell of gas particles. This shell would have been created when the unexploded star blew away an irregular wind of gas particles at the end of its life.

The cooperation between Vink and the Italians did not happen out of the blue. The Italian group got to work on preliminary results that Vink showed at a conference in 2019. “When we recently found an acceleration and they predicted just that in their models, the puzzle pieces fell into place,” says Vink.

Cassiopeia A has attracted a lot of attention lately. For example, NASA’s new X-ray satellite IXPE published its first image of the exploded star on Valentine’s Day. And the James Webb Space Telescope will turn its infrared gaze to the supernova remnants later this year.

Quote: Ejection nebula of supernova Cassiopeia A does not expand evenly (2022, March 28) retrieved 29 March 2022 from https://phys.org/news/2022-03-ejection-nebula-supernova-cassiopeia-evenly.html