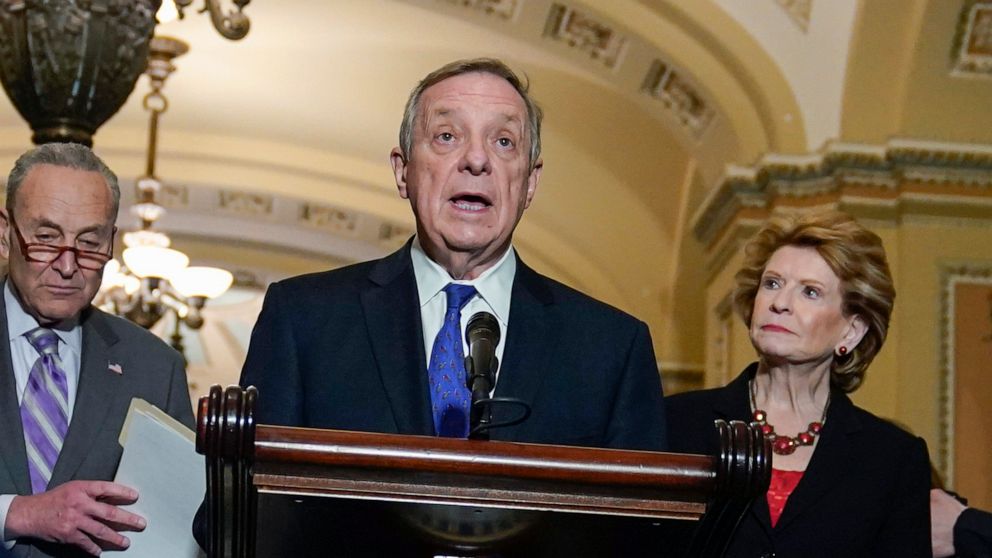 Sen. Dick Durbin on Sunday defended the Biden administration’s decision to not facilitate the delivery of MiG-29 fighter jets to Ukraine from Poland.

“There are other ways for us to provide surface to air missiles and air defenses that will keep the Russians at bay in terms of their aerial attack,” Durbin, D-Ill., told ABC “This Week” anchor George Stephanopoulos. “There are other ways to do that that are consistent with the NATO alliance and would not jeopardize expanding this into World War III or even worse.”

Ukrainian President Volodymyr Zelenskyy gave a virtual address to Congress on Wednesday, pleading with the US for additional military aid, further sanctions and a no-fly zone over Ukraine to stop the Russian invasion. Zelenskyy also asked the US to assist with the delivery of MiG-29 fighter jets to Ukraine from Poland, but the Biden administration has held firm against the request, insisting that is an offensive move that could lead to World War III.

There is bipartisan support for sending planes, with Democratic members of Congress in favor, including Senate Majority Leader Chuck Schumer.

“We’re asking for one-third of the Polish Air Force to be sent into Ukraine,” Durbin, the Senate majority whip, added.

“The desperate things that he’s doing now killing innocent civilians and children, for goodness sakes, he will have a stained name in history forever for this,” Durbin said of Putin.

President Joe Biden and China’s President Xi Jinping spoke Friday morning and Biden made clear the “implications and consequences” if China aligns with Russia, according to the White House readout.

“How about tougher economic sanctions right now, not only on Russia, but also potentially for China?” Stephanopoulos pressed. “We know that President Biden spoke with President Xi on Friday. It doesn’t appear that China, at least not yet, is ready to back off their support for Putin.”

Durbin told Stephanopoulos that Xi must “decide his place in history and China’s place in the world” and he thinks Biden made that clear in the call, but did not answer whether he thinks the US should implement sanctions on China.

“If (China) is going to be part of Putin and his barbaric conduct in Ukraine, he’s going to run the risk of discrediting his own nation,” Durbin said.

Stephanopoulos pressed Durbin on GOP criticism that Biden is turning to dictators for oil while blaming high gas prices on the Russian invasion when he could ramp up American oil production.

“One of the things we’ve seen at home recently is, of course, inflation, higher gas prices across the board,” Stephanopoulos pressed. “President Biden has said that the sanctions on Putin are at least part of the issue there for causing the rise in the prices. But our next guest, Senator Barrasso, has taken that on.”

Sen. John Barrasso said Tuesday that “Biden would rather turn to dictators like those in Iran and those in Venezuela rather than turn against the climate elitists who dictate the energy policy of that Democratic Party and of his presidency. So now he’s trying to pass the buck to Vladimir Putin.”

Asked to respond, Durbin said the Biden administration is working to reduce the impact of cutting off Russian oil and that it is “completely wrong” to blame Biden’s efforts to stop Putin for inflation, saying “other countries are going through the same inflation.”

Durbin slammed Hawley’s attacks, calling them inaccurate and unfair, and said Jackson has been scrutinized more than any person he could think of.

“There’s no truth to what he says and he’s part of the fringe within the Republican Party,” Durbin said. “This was a man who was fist-bumping the murderous mob that descended on the Capitol on Jan. 6 of the last year. He doesn’t have the credibility he thinks he does.”