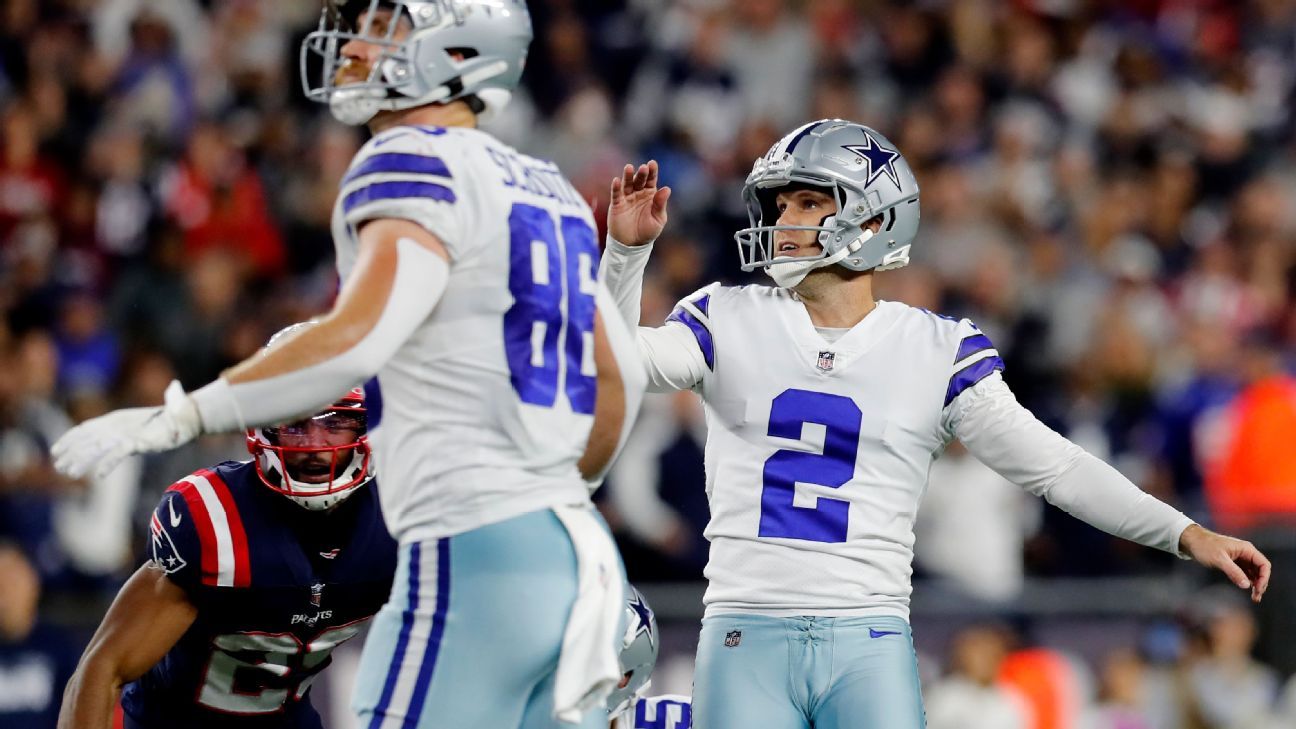 FRISCO, Texas — The Dallas Cowboys have released kicker Greg Zuerlein and tight end Blake Jarwin, freeing up around $5 million and putting them under the salary cap before the start of the league year next week.

The moves, however, do not put the Cowboys in position to retain key players or add free agents when the market opens. To do that, Dallas would need to create more room, which could come from the decisions to release or trade wide receiver Amari Cooper or right tackle La’el Collins. The Cowboys have had trade discussions on both players, sources said.

At the start of the week, the Cowboys restructured the contracts of quarterback Dak Prescott and right guard Zack Martin to gain roughly $22 million in salary-cap room.

Zuerlein had key misses in losses to the Tampa Bay Buccaneers, Las Vegas Raiders and Arizona Cardinals, but he made the game winner against the Los Angeles Chargers and a tying kick late against the New England Patriots, which led to a Dallas win in overtime.

Special teams coach John Fassel defended Zuerlein, whom he coached with the Los Angeles Rams, numerous times during the season, saying he believed the lack of offseason work because of back surgery contributed to the kicker’s inconsistency. Zuerlein missed one game last year while on the COVID-19 list, and his replacement, Lirim Hajrullahu, made all five extra points in a win over the Atlanta Falcons.

The Cowboys signed free agent Chris Naggar after the season, but he has limited experience, having played in one game last year with the Cleveland Browns.

Jarwin underwent surgery on his hip last month that could cost him most of the 2022 regular season, and there is uncertainty as to whether he will be able to return at all. There were discussions of Jarwin accepting a cut in pay from his $4.25 million base salary with the chance to make the money back in incentives.

He signed a four-year deal worth as much as $22 million in 2020 but has been hurt in each of the past two years, suffering a torn ACL in 2020. He caught 11 passes for 96 yards and two touchdowns in eight games last season.

The Cowboys also released running back Ito Smith, defensive back Reggie Robinson and wide receiver Robert Foster. Robinson was a fourth-round pick in 2020 who missed last season because of a toe injury.