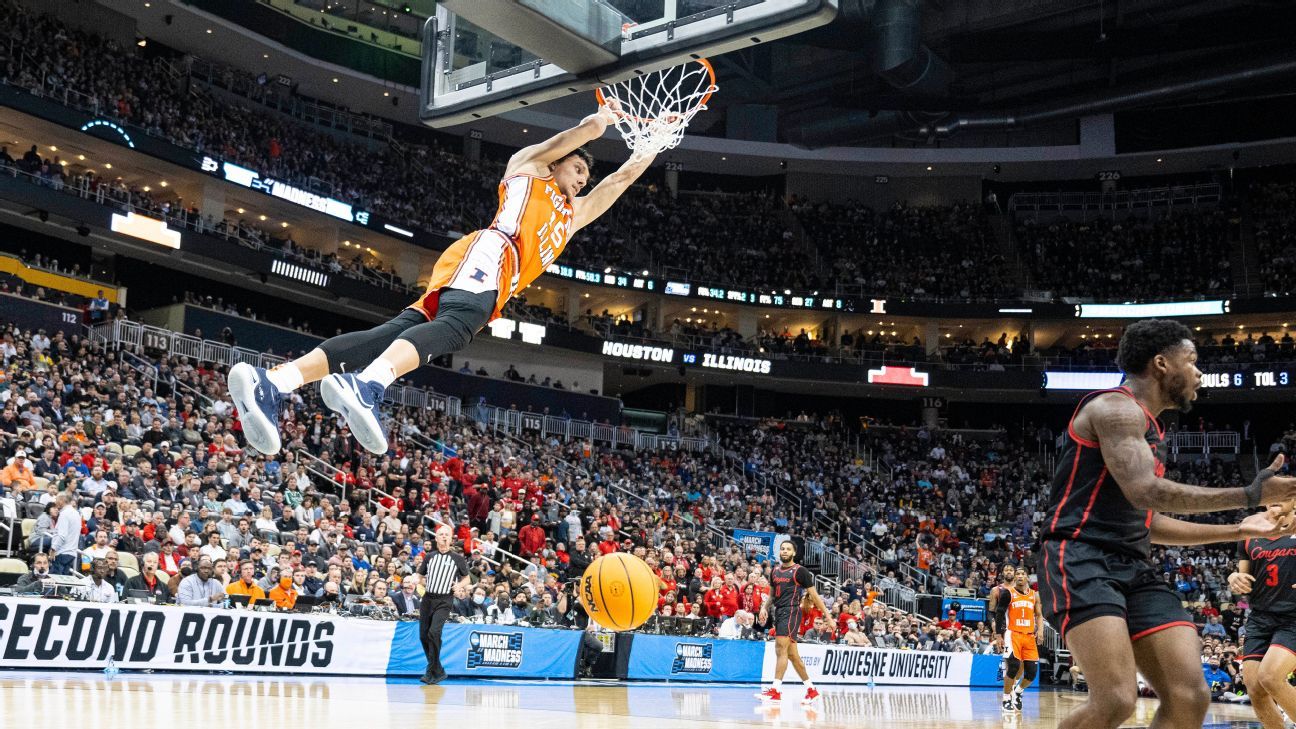 PITTSBURGH — Trailing by six in the second round of the NCAA tournament on Sunday afternoon, Illinois guard Alfonso Plummer stole the ball from Houston’s Jamal Shead and fed it forward to teammate RJ Melendez.

Sprinting out in front of the nearest defender, Melendez made the easy two-handed slam to cut Houston’s lead to just four with 8 minutes, 40 seconds left in the second half of No. 4 Illinois’ matchup against No. 5 Houston. The crowd roared at the bucket, coming to life as the Illini attempted to come back against the smothering, defensive-minded Cougars.

But as Melendez hung on the rim to slow his forward movement, a whistle blew, and the guard was assessed a technical by official Brian O’Connell for hanging on to the rim too long.

Just as it appeared the Illini would grab a little momentum, it was snatched away as Houston’s Jamal Shead hit the technical free throw to stretch the lead to five.

“It’s deflating,” Illinois coach Brad Underwood said. “You make a play that changes momentum of the game and then to have that called in that moment? I can’t wait to see it [on replay].”

Illinois got a little closer in the ensuing possession thanks to a three-point play by big man Kofi Cockburn, but it wasn’t able to overtake Houston’s lead, falling to the No. 5 Cougars 68-53 at PPG Paints Arena.

Illinois was outscored 22-11 after the technical foul against Melendez.

Underwood said after the game the official told him the foul shouldn’t have been called, and the coach wondered if there was a personal motivation to calling the foul.

“[O’Connell] told me he should never have called it,” Underwood said. “Maybe it’s personal, I don’t know. To call it like that, when a kid has a head of steam going, 100 mph? We all talk about health and safety of the student-athletes. Come on.

Melendez said the official didn’t offer him an explanation for the technical, and Melendez said he simply waited to get his legs under him before dropping off the rim to prevent injury.

“I don’t know what was the problem with that,” the freshman from Puerto Rico said. “I was going full speed in that transition, so I always thinking about Paul George’s injury, what happened landing on the mat, on the rim, so I just try to hang on, go a bit of rhythm, come back on both feet. “

According to NCAA policy, a pool report on the technical foul was not permitted because explanations aren’t given for judgment calls on individual plays.