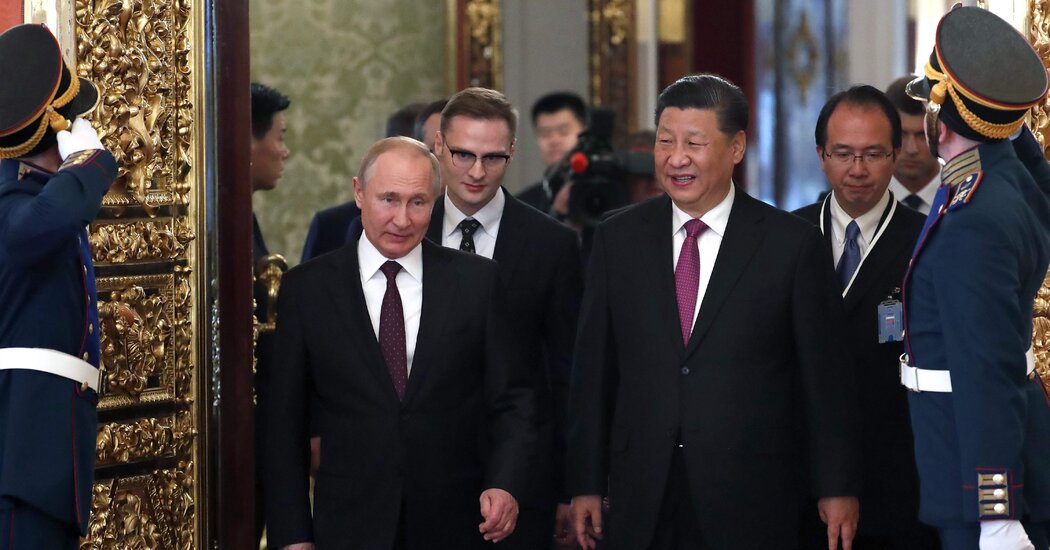 When the United States and its allies declared a financial war on Russia after its invasion of Ukraine, the world turned to see what China would do.

As a growing global power, one of the ways China has extended its influence is by establishing close financial ties with countries unwilling to follow rules dictated by the United States and other Western powers. Surely, the thinking went, China would do the same for Russia.

There is just one big problem: money. Specifically, China’s money.

To help Russia evade sanctions, China would have to offer a viable substitute to the American dollar. But Chinese money — the renminbi — is barely used outside of China. Only 3 percent of the world’s business is done using the redback. Even Russia and China conduct their trade mostly in US dollars and euros.

What’s more, the risks of helping Russia avoid economic ruin may be greater for China than any possible reward. Much of China’s own economy depends on the US dollar and the financial edifice that underpins it. Chinese companies are active around the globe, using the American financial system to pay employees, buy materials and make investments. China is the world’s largest exporter, and is paid for its goods mainly in dollars.

Should Beijing run afoul of the sanctions against Russia, China’s own financial stability would be put at risk at a time when its leaders have emphasized caution. And besides, the few lifelines that Chinese leaders could feasibly offer Russia would not be strong enough to help the country survive a financial blackout from the United States and its allies.

It could facilitate cross-border transactions — allowing China to continue to sell to Moscow many of the goods it makes for the rest of the world. It could make investments in Russian energy firms on the cheap. It could let Russia’s central bank cash in some of the $140 billion it holds in Chinese bonds. Beijing could even set up a rogue bank to help move Russian money around like it has done for Iran and North Korea.

None of these measures would be enough to counterbalance the sanctions against Russia, which have included cutting off Russia’s biggest banks from the global financial system and a ban on oil and gas imports by the United States.

“China will not save the sinking boat of the Russian economy,” said Eswar Prasad, a Cornell University economist. But, he added, it could “perhaps allow it to float a little longer and sink a little more slowly.”

A deepening friendship between Xi Jinping, the leader of China, and President Vladimir V. Putin of Russia has helped bring the countries closer together than they have been since the 1950s, when Mao cooperated closely with Joseph Stalin and then Nikita Khrushchev. The warming of diplomatic ties was built on a shared desire to put an end to what China and Russia see as America’s economic and geopolitical hegemony.

When Mr. Xi and Mr. Putin met on the eve of the Beijing Olympic Games, they declared that the bond between the two countries had “no limits.” Russia’s invasion of Ukraine, days after the Games ended, led the US and other industrialized nations to impose waves of sanctions aimed at devastating the Russian economy.

China has repeatedly criticized the moves. Premier Li Keqiang did so again on Friday at his annual news conference, saying that, “Relevant sanctions will hurt the world’s economic recovery, it is in no one’s interest.”

But criticizing sanctions is one thing. Choosing to go against the global financial order and risk inviting sanctions at home is another. Beijing has already given some indication that it isn’t willing to do the latter. The Chinese-led Asian Infrastructure Investment Bank — an investment bank that Washington sees as a World Bank rival — last week said it would put its lending to Russia and Belarus on hold over the war in Ukraine. Some Chinese banks have cut back on the financing of Russian commodities.

“Chinese banks are trying to cut their exposure to Russia,” said Raymond Yeung of ANZ Bank. “You can tell that the theory of China offering a financial alternative to Russia remains questionable.”

Nevertheless, China’s top banking regulator said last week that banks would not necessarily sever their ties with Russian counterparts. “We will not participate in such sanctions, and we continue to maintain normal economic and trade and financial exchanges with relevant parties,” said Guo Shuqing, the chairman of the China Banking and Insurance Regulatory Commission.

As sanctions are piled on, maintaining those economic ties will become harder without taking on more risk, and China’s options to help Russia are dwindling. Western countries have locked Russia out of the Swift financial messaging and payments system, effectively excluding Russian banks from international transactions.

China has been developing an alternative messaging service for financial institutions to communicate cross-border transactions. But that service operates on a tiny scale and relies partly on technology tangled up in sanctions.

The Russia-Ukraine War and the Global Economy

Shortages of essential metals. The price of palladium, used in automotive exhaust systems and mobile phones, has been soaring amid fears that Russia, the world’s largest exporter of the metal, could be cut off from global markets. The price of nickel, another key Russian export, has also been rising.

Financial turbulence. Global banks are bracing for the effects of sanctions intended to restrict Russia’s access to foreign capital and limit its ability to process payments in dollars, euros and other currencies crucial for trade. Banks are also on alert for retaliatory cyberattacks by Russia.

After Visa and Mastercard stopped their operations in Russia, several Russian banks turned to China’s UnionPay, which offers payment options in some 180 countries. For China to offer its own payment processing, transactions must not be in dollars in order to avoid punishment.

Then there is the money that Russia has sitting in China. Through central bank reserves, government investments and a longstanding loan agreement, Russia can quickly raise in China the equivalent of more than $160 billion, or about 16 months’ worth of Russian sales of oil and natural gas to the European Union and the United States.

A large part of that money — around $140 billion — is tied up in bonds and denominated renminbi. The rest is tied up in agreements between the two countries’ central banks that commit each to short-term, interest-free loans worth $24 billion in case of an emergency.

A more diplomatically risky option would be for China to launder money for Russia through a small Chinese bank set up specifically to evade sanctions. This is what China National Petroleum Corporation did in 2009 when it bought a small bank in China’s northwestern province of Xinjiang and renamed it Bank of Kunlun. The bank helped Iran conduct hundreds of millions of dollars worth of transactions.

In a similar scenario, a Chinese oil company could pay a shell company and its corporate officers in China a very large “consulting fee” to trade oil on its behalf, instead of paying a Russian oil company directly for crude oil. Eventually, though, such an operation would likely be shut down. That is what happened with Bank of Kunlun after the US Treasury sanctioned it in 2012.

In another scenario, Chinese companies with state backing could scoop up the West’s stakes in some of Russia’s biggest oil and gas companies. American and European giants like Shell and BP have announced that they will exit their joint ventures in Russia over the invasion, but there are not a lot of obvious buyers other than Chinese state-owned enterprises.

“You’ve got some of the most valuable energy companies in the world now trading at mere fractions of their real value,” said Taylor Loeb, a China analyst at Trivium, a consulting firm. “Developed countries won’t touch these companies. That basically only leaves China. It might be really bad PR, but the price may just be too good.”

Even as Beijing contemplates just how far it is willing to go to maintain its “no limit” friendship with Russia, there is one harsh reality: The renminbi cannot save Russia’s own currency, the ruble. The ruble is plunging and has already erased much of the country’s wealth. The only way for Russia to shore it up? Buy US dollars.