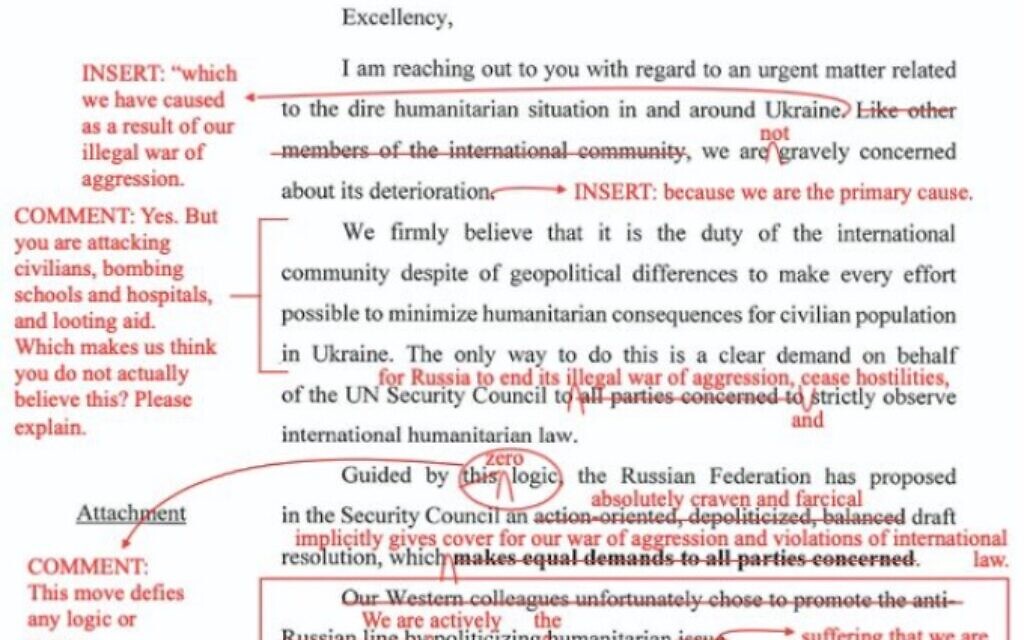 In an extraordinary move, Canada has publicly mocked and derided Russia over its abandoned attempt to pass a United Nations resolution on the humanitarian situation in Ukraine.

Russia on Thursday canceled a UN Security Council vote on the resolution which had been scheduled for Friday, due to a lack of support from its closest allies, diplomats said.

But Canada’s UN mission did not back off. Instead, it posted to Twitter its supposed proposed changes to the Russian document — complete with text strikethroughs and red pen markings — in which it openly skewered Moscow for its invasion of its neighbor.

“Thank you @RussiaUN for your letter dated March 16,” the tweet said. “Please see our suggested edits below.”

For instance, to Russia’s opening statement about “the dire humanitarian situation in and around Ukraine,” Canada suggests adding: “which we have caused as a result of our illegal war of aggression.”

To the statement that Russia was “gravely concerned about [the situation’s] deterioration,” Canada offered to insert the word “not,” as “we are the primary cause.”

“Guided by this logic” becomes “Guided by zero logic.” Russia’s offer for “an action-oriented, depoliticized, balanced draft resolution, which makes equal demands to all parties concerned” is turned into “an absolutely craven and farcical draft resolution, which implicitly gives cover for our war of aggression and violations of international law .”

In later suggestions, Canada proposes Russia state that it has abused its UN veto power, inflicted suffering upon civilians, has little care for human life, and disdains the UN and other member states.

Thank you @RussiaUN for your letter dated March 16.

Dmitry Polyanskiy, Russia’s deputy permanent representative to the UN, tweeted in response: “Thank you @CanadaONU for this kindergarten-level Russophobic libel! It only shows that your diplomatic skills and good manners are at lowest ebb and gives an idea why your country’s bid for a non-permanent seat in #SecurityCouncil was voted down twice in 20yrs by UN membership.”

Do you value The Times of Israel?

If so, we have a request.

Every day, our journalists aim to keep you abreast of the most important developments that deserve your attention. Millions of people rely on ToI for fast, fair and free coverage of Israel and the Jewish world.

We care about Israel – and we know you do too. So today, we have an ask: show your appreciation for our work by joining The Times of Israel Communityan exclusive group for readers like you who appreciate and financially support our work.

We’re really pleased that you’ve read X Times of Israel articles in the past month.

That’s why we started the Times of Israel ten years ago – to provide discerning readers like you with must-read coverage of Israel and the Jewish world.

So now we have a request. Unlike other news outlets, we haven’t put up a paywall. But as the journalism we do is costly, we invite readers for whom The Times of Israel has become important to help support our work by joining The Times of Israel Community.

For as little as $6 a month you can help support our quality journalism while enjoying The Times of Israel AD-FREEas well as access exclusive content available only to Times of Israel Community members.

Thank you,
David Horovitz, Founding Editor of The Times of Israel