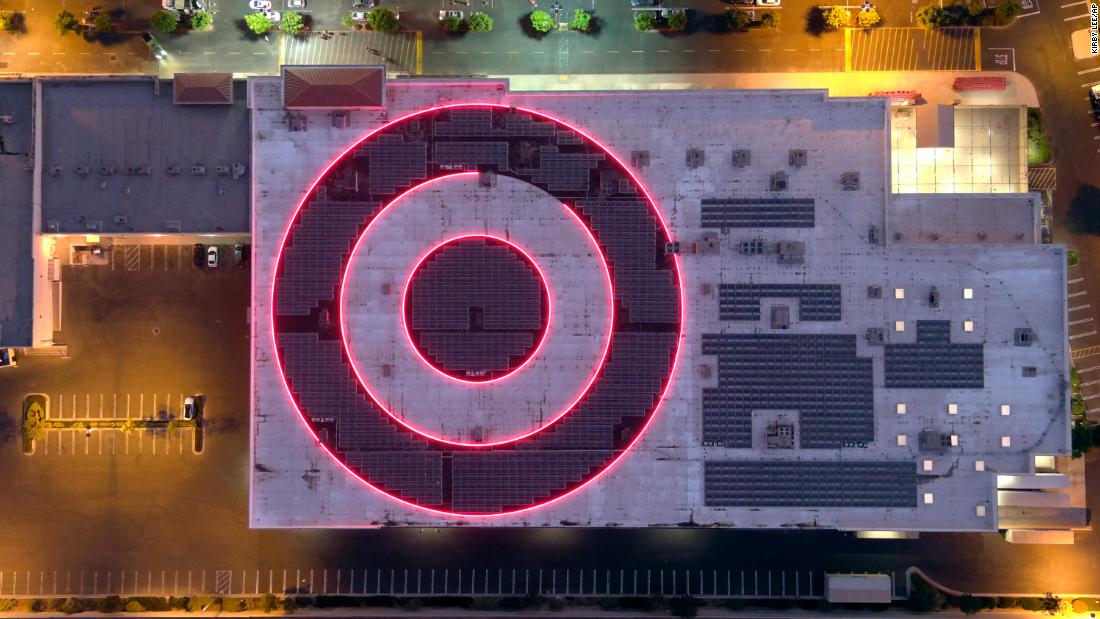 As of February 2021, IKEA had 54 solar arrays installed across 90% of its US locations.

Leveraging the full rooftop solar potential of these superstores would generate enough electricity to power nearly 8 million average homes, the report concluded, and would cut the same amount of planet-warming emissions as pulling 11.3 million gas-powered cars off the road.

The average Walmart store, for example, has 180,000 square feet of rooftop, according to the report. That’s roughly the size of three football fields and enough space to support solar energy that could power the equivalent of 200 homes, the report said.

“Every rooftop in America that isn’t producing solar energy is a rooftop wasted as we work to break our dependence on fossil fuels and the geopolitical conflicts that come with them,” Johanna Neumann, senior director for Environment America’s campaign for 100% Renewable, told CNN. “Now is the time to lean into local renewable energy production, and there’s no better place than the roofs of America’s big-box superstores.”
Advocates involved in clean energy worker-training programs tell CNN that a solar revolution in big-box retail would also be a significant windfall for local communities, spurring economic growth while tackling the climate crisis, which has inflicted disproportionate harm on marginalized communities.

Yet only a fraction of big-box stores in the US have solar on their rooftops or solar canopies in parking lots, the report’s authors told CNN.

CNN reached out to five of the top US retailers — Walmart, Kroger, Home Depot, Costco and Target — to ask: Why not invest in more rooftop solar?

Many renewable energy experts point to solar as a relatively simple solution to cut down on costs and help rein in fossil fuel emissions, but the companies point to several roadblocks — regulations, labor costs and structural integrity of the rooftops themselves — that are preventing more widespread adoption.

The need for these kinds of clean energy initiatives is becoming “unquestionably urgent” as the climate crisis accelerates, said Edwin Cowen, professor of civil and environmental engineering at Cornell University.

“We are behind the eight ball, to put it mildly,” Cowen told CNN. “I would have loved to see policy help incentivize rooftop solar 15 years ago instead of five years ago in the commercial space. There’s still a tremendous amount of work to do.”

Neumann said Walmart, the nation’s largest retailer, possesses by far the largest solar potential. Walmart has around 5,000 stores in the US and more than 783 million square feet of rooftop space — an area larger than Manhattan — and more than 8,974 gigawatt hours of annual rooftop solar potential, according to the report.

Walmart spokesperson Mariel Messier told CNN the company is involved in renewable energy projects around the world, but many of them are not rooftop solar installations. The company has reported having completed on- and off-site wind and solar projects or had others under development with a capacity to produce more than 2.3 gigawatts of renewable energy.
Neumann said Environment America has met with Walmart a few times, urging the retailer to commit to installing solar panels on roofs and in parking lots. The company has said it’s aiming to source 100% of its energy through renewable projects by 2035.

“Of all the retailers in America, Walmart stands to make the biggest impact if they put rooftop solar on all of their stores,” Neumann told CNN. “And for us, this report just underscores just how much of an impact they could make if they make that decision.”

According to Environment America, Walmart had installed almost 194 megawatts of solar capacity on its US facilities as of the end of the 2021 fiscal year and additional capacity in off-site solar farms. The company’s installations in California were expected to provide between 20% to 30% of each location’s electricity needs.

Target ranked No. 1 for on-site solar capacity in 2019, according to industry trade group Solar Energy Industries Association’s most recent report. It currently has 542 locations with rooftop solar — around a quarter of the company’s stores — a Target spokesperson told CNN. Rooftop solar generates enough energy to meet 15% to 40% of Target properties’ energy needs, the spokesperson said.

Richard Galanti, the chief financial officer at Costco, said the company has 121 stores with rooftop solar around the world, 95 of which are in the US.

Walmart, Target and Costco did not share with CNN what their biggest barriers are to adding rooftop or parking lot solar panels to more stores.

“My suspicion is that they want an even stronger business case for deviating from business-as-usual,” Neumann said. “Historically, all those roofs have done is cover their stores, and rethinking how [they] use their buildings and thinking of them as energy generators, not just protection from rain, requires a small change in their business model.”

Home Depot, which has around 2,300 stores, currently has 75 completed rooftop solar projects, 12 in construction and more than 30 planned for future development, said Craig D’Arcy, the company’s director of energy management. Solar power generates around half of these stores’ energy needs on average, he said.

Aging rooftops at stores are a “huge impediment” to solar installation, D’Arcy added. If a roof needs to be replaced in the next 15 to 20 years or sooner, it doesn’t make financial sense for Home Depot to add solar systems today, he said.

“We have a goal of implementing solar rooftop where the economics are attractive,” D’Arcy told CNN.

CNN also reached out to Kroger, which owns about 2,800 stores across the US. Kristal Howard, a Kroger spokesperson, said the company currently has 15 properties — stores, distribution centers and manufacturing plants — with solar installations. One of the “multiple factors affecting the viability of a solar installation” was the stores’ ability to support a solar installation on the roofs, Howard said.

Cowen, the engineering professor at Cornell, said solar is already attractive, but that labor costs, incentives and the different layers of regulation likely pose some financial challenges in solar installations.

“For them, this means usually hiring a local site firm that can do that installation that also knows local policy,” Cowen said. “It’s just another layer of complexity that I think is beginning to make sense because the costs have come down enough, but it needs kind of reopening that door of getting into an existing building.”

Rep. Sean Casten of Illinois, who co-chairs the power sector task force in the House, said the US has “failed to provide the incentives to people who have the expertise to go in and build these things.” The reason both retail companies and the power sector have not made much progress on solar is because “our system is so disjointed” and has a complex regulation structure, Casten said.

“Why aren’t we doing something that makes economic sense? The answer is this horribly disjointed federal policy where we massively subsidize fossil energy extraction, and we penalize clean energy production,” Casten told CNN. “For a long, long time, if you wanted to build a solar panel on the rooftop of Walmart, your biggest enemy was going to be your local utility because they didn’t want to lose the load.

“We could have done this decades ago,” Casten added. “And had we done it, we would not be in this dire position with the climate, but we’d also have a lot more money in our pocket.”

For Charles Callaway, director of organizing at the nonprofit group WE ACT for Environmental Justice, strengthening the rooftop solar capacity in big box retail stores is a no-brainer, especially if companies allow the local community to reap benefits either through installation jobs or sharing the electricity produced later.

Either way, it would put a massive dent in curbing the climate crisis and help usher in an equitable transition away from fossil fuels — and it’s doable, Callaway told CNN.

The New York City resident led a worker training program that helped train more than 100 local community members, mostly people of color, to become solar installers. He also formed a solar workers cooperative to ensure many of the participants of the training program get jobs in a tough market.

In the last two years, Callaway said his group has not only installed solar panels on roofs of affordable housing units, but also equipment capable of producing 2 megawatts of solar energy on shopping malls up in upstate New York. He emphasized that hiring locally would be most beneficial since local installers know the community and local regulations best.

“One of my huge concerns is social equity,” Cowen said. “Access to renewable energy is a fairly privileged position these days, and we’ve got to figure out ways to make that not true.”

Jasmine Graham, WE ACT’s energy justice policy manager, said the potential of building rooftop solar on big box superstores is encouraging, only “if these projects use local labor, if they are paying prevailing wages, and if this solar is being used in a manner such as community solar, which would allow [utility] bill discounts for people who live in the same utility zone.”

Pressure is mounting for global leaders to act urgently on the climate crisis after a UN report in late February warned the window for action is rapidly closing.

Neumann believes the US can meet its energy demand with renewables. All it takes, she said, is the political will to make that switch, and the inclusion of the local community so no one gets left behind in the transition.