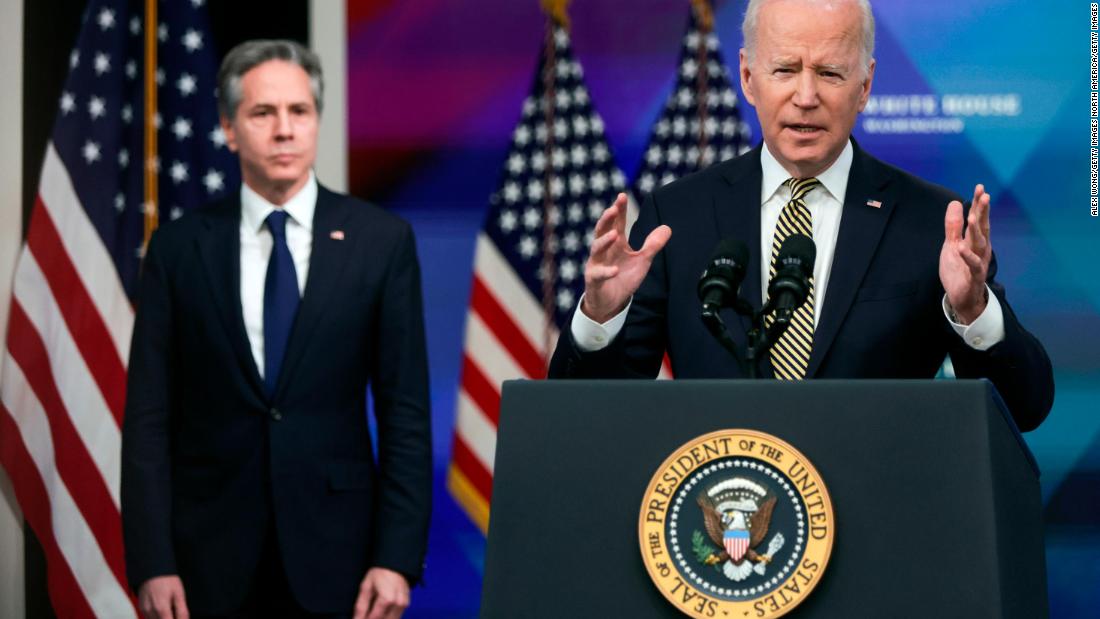 Since the prospect of the NATO leaders summit was first broached roughly two weeks ago, American and European officials have been discussing potential announcements for leaders to make at the conclusion of the gathering, according to several people familiar with the plans.

That could include new rounds of sanctions on Russian oligarchs, additional measures restricting the country’s finances and new steps to limit import of Russian energy products. Discussions are also underway on what measures can be unveiled to provide more support for Ukraine, including new shipments of military assistance or financial aid to bolster the country’s defenses.

And Biden has left open the option of scaling up US troop deployments to NATO members along the alliance’s eastern edge, reinforcing American commitment to European defense at a critical moment.

But the stark reality that those moves are unlikely to curb Putin’s war will loom over Biden’s visit to Brussels for a snap meeting of the North Atlantic Treaty Organization, along with a special session of the European Council and a gathering of the G7. Biden could also add another stop in Eastern Europe, potentially Poland, officials have said. He leaves Washington on Wednesday for the high-level diplomatic maneuvers.

While Biden has been successful in rallying European and Asian allies behind a punishing set of sanctions and unparalleled levels of military assistance, he and his NATO counterparts have drawn lines at where their support will end. And while all parties seem to support a diplomatic resolution to the crisis, US and European officials say the parameters of such a settlement remain murky.

That leaves open how Biden’s visit to Europe — one of the inflection moments of his presidency — can alter the course of the worst conflict in Europe since World War II. And it poses another discussion point that world leaders must begin to broach: What happens if, or when, Ukraine can no longer withstand Russia’s assault?

Biden challenged to be ‘the leader of the world’

Biden was publicly challenged by Ukraine’s leader last week to assume responsibility for bringing an end to the fighting. In an emotional address to Congress, in which he called for a no-fly zone and help procuring fighter jets, President Volodymyr Zelensky spoke directly to Biden, who was watching from his private library on the third floor of the White House.

Biden was also challenged by Ukraine’s former President, Petro Poroshenko, to visit Ukraine as a “symbol of our solidarity” during his trip to Europe this week.

Speaking to CNN’s Jim Acosta Saturday afternoon, Poroshenko called Biden a “very good friend of mine and a very good friend of Ukraine,” adding that a visit by Biden would be “an extremely right step to demonstrate that the whole world is together with us against Russia.”

Those personal appeals will have resonated with a man who vowed while seeking office to restore American leadership, renew US alliances and defend democracy from the creeping tide of authoritarianism.

Nowhere will that challenge be more relevant than at this week’s emergency talks, where leaders are looking to Biden for direction and purpose as the war in Ukraine grinds ahead.

“He’s challenging Biden to live up to his responsibilities as a leader of the West, a leader of the democratic community of nations. And he presented the de facto challenge to NATO,” said Ian Brzezinski, a deputy assistant secretary of defense for Europe and NATO in the George W. Bush administration.

“He was saying if NATO is not up to this challenge, we have to think of other security arrangements,” Brzezinski said. “What a powerful challenge to the relevance of NATO in this day and age. That sets the context for … (the) summit meeting.”

The limits of supporting Ukraine on full display ahead of trip

Yet as the summits were announced last week, some European diplomats revealed concern at what they viewed as a lack of major steps available for the leaders to take at the high-profile gathering, which both Russia and Ukraine will be watching closely.

Major items that Ukraine wants, like help from NATO in establishing a no-fly zone or providing Soviet-era fighter jets, appear for now off the table as the US and its partners seek to avoid direct confrontation with Russia. That means any announcement coming out of the meetings would likely focus more on ramping up assistance that’s already being provided, including military and financial aid, or applying new sanctions on Russia.

European and US officials said discussions about announcements and a concluding joint statement were ongoing as countries look to settle on a decision or takeaway for the summit to produce.

“The President is looking forward to seeing his counterparts face to face. I suspect they will have a number of new measures that they will be able to disclose and roll out during those conversations, but I’m not going to get ahead of them a few days in advance,” US deputy national security adviser Jon Finer said last week on CNN.

Having a major announcement materialize during the summit could help underscore the current unity among the allies, which US officials say has surprised Putin as his military struggles with losses on the ground.

“He miscalculated about the West. I think he thought that … there would be some scolding, maybe a couple of sanctions, but he could withstand it, and he could continue, and he could move on,” said Marie Yovanovitch, the train US ambassador to Ukraine.

“Instead, he has inspired a resurgence of NATO. And the West is united in opposition and trying to provide not only sort of strengthening NATO and the flank countries on Ukraine’s border, but also in providing support to Ukraine.”

Countering China will be top of mind after Biden-Xi call

The upcoming summits will also present Biden an opportunity to take his counterparts’ temperature on another matter: What to do if Chinese President Xi Jinping decides to provide Russia military or economic support, as Putin has requested.
On a 110-minute call with Xi last week, Biden laid out the “implications and consequences” of going ahead with that support, according to the White House. But punishing China — the world’s second-largest economy — would be far more complicated than it has been with Russia, and would require the same unity with Europe, which hasn’t always agreed with Biden on how to approach Beijing.

“This is an incredibly important summit. It is taking place on an extraordinary basis in the midst of a crisis. It is partly to make sure that we and our allies [are] on the same page, which is good. But it’s also very important for sending a signal to Vladimir Putin,” said Kurt Volker, a former US ambassador to NATO and special envoy for Ukraine.

Volker identified several messages the alliance must send during its summit, including recommitting to the Article 5 guarantee of collective defense and making clear the use of nuclear weapons by Russia would warrant a Western response.

But he said NATO must also make clear that Ukraine — not a member of its grouping — is nevertheless a matter of critical importance to its members.

“I think it’s very important that NATO also send a signal about Ukraine, that Ukraine’s survival as an independent and sovereign state in Europe is a NATO interest,” Volker said. “We don’t want to say what we don’t do. We don’t want to be too specific about what we will do. But we need to send a signal to Putin that we’re not going to sit by while he destroys and eliminates a sovereign European country.”