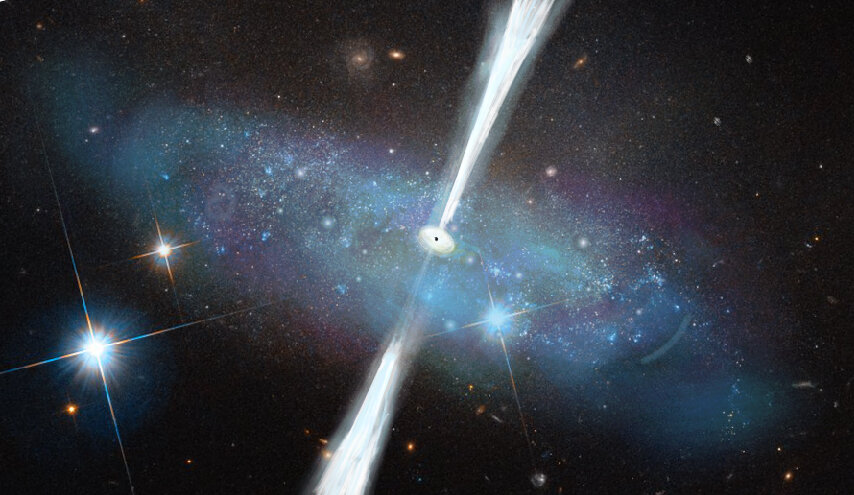 A team led by researchers at the University of North Carolina at Chapel Hill has found a previously overlooked treasure trove of massive black holes in dwarf galaxies. The newly discovered black holes offer a glimpse into the life story of the supermassive black hole at the center of our own Milky Way galaxy.

“This result really blew my mind because these black holes were previously hiding in plain sight,” said Mugdha Polimera, lead author of the study and a UNC-Chapel Hill Ph.D. student.

Black holes are typically detected when they are actively growing by ingesting gas and stardust swirling around them, which makes them glow intensely.

“Just like fireflies, we see black holes only when they’re lit up—when they’re growing—and the lit-up ones give us a clue to how many we can’t see.”

The problem is, while growing black holes glow with distinctive high-energy radiation, young newborn stars can too. Traditionally, astronomers have differentiated growing black holes from new star formation using diagnostic tests that rely on detailed features of each galaxy’s visible light when spread out into a spectrum like a rainbow.

The path to discovery began when undergraduate students working with Kannappan tried to apply these traditional tests to galaxy survey data. The team realized that some of the galaxies were sending mixed messages—two tests would indicate growing black holes, but a third would indicate only star formation.

“Previous work had just rejected ambiguous cases like these from statistical analysis, but I had a hunch they might be undiscovered black holes in dwarf galaxies,” Kannappan said. She suspected that the third, sometimes contradictory, test was more sensitive than the other two to typical properties of dwarfs: their simple elemental composition (mainly primordial hydrogen and helium from the Big Bang) and their high rate of forming new stars.

Study coauthor Chris Richardson, an associate professor at Elon University, confirmed with theoretical simulations that the mixed-message test results exactly matched what theory would predict for a primordial-composition, highly star-forming dwarf galaxy containing a growing massive black hole. “The fact that my simulations lined up with what the Kannappan group found made me excited to explore the implications for how galaxies evolve,” Richardson said.

A census of growing black holes

Polimera took on the challenge of constructing a new census of growing black holes, with attention to both traditional and mixed-message types. She obtained published measurements of visible light spectral features to test for black holes in thousands of galaxies found in two surveys led by Kannappan, RESOLVE and ECO. These surveys include ultraviolet and radio data ideal for studying star formation, and they have an unusual design: Whereas most astronomical surveys select samples that favor big and bright galaxies, RESOLVE and ECO are complete inventories of huge volumes of the present-day universe in which dwarf galaxies are abundant.

“It was important to me that we didn’t bias our black hole search toward dwarf galaxies,” Polimera said. “But in looking at the whole census, I found that the new type of growing black holes almost always showed up in dwarfs. I was taken back by the numbers when I first saw them.”

More than 80 percent of all growing black holes she found in dwarf galaxies belonged to the new type.

The result seemed too good. “We all got nervous,” Polimera said. “The first question that came to my mind was: Have we missed a way that extreme star formation alone could explain these galaxies?” She led an exhaustive search for alternative explanations involving star formation, modeling uncertainties, or exotic astrophysics. In the end, the team was forced to conclude that the newly identified black holes were real.

“We’re still pinching ourselves,” Kannappan said. “We’re excited to pursue a zillion follow-up ideas. The black holes we’ve found are the basic building blocks of supermassive black holes like the one in our own Milky Way. There’s so much we want to learn about them.”

Provided by University of North Carolina at Chapel Hill